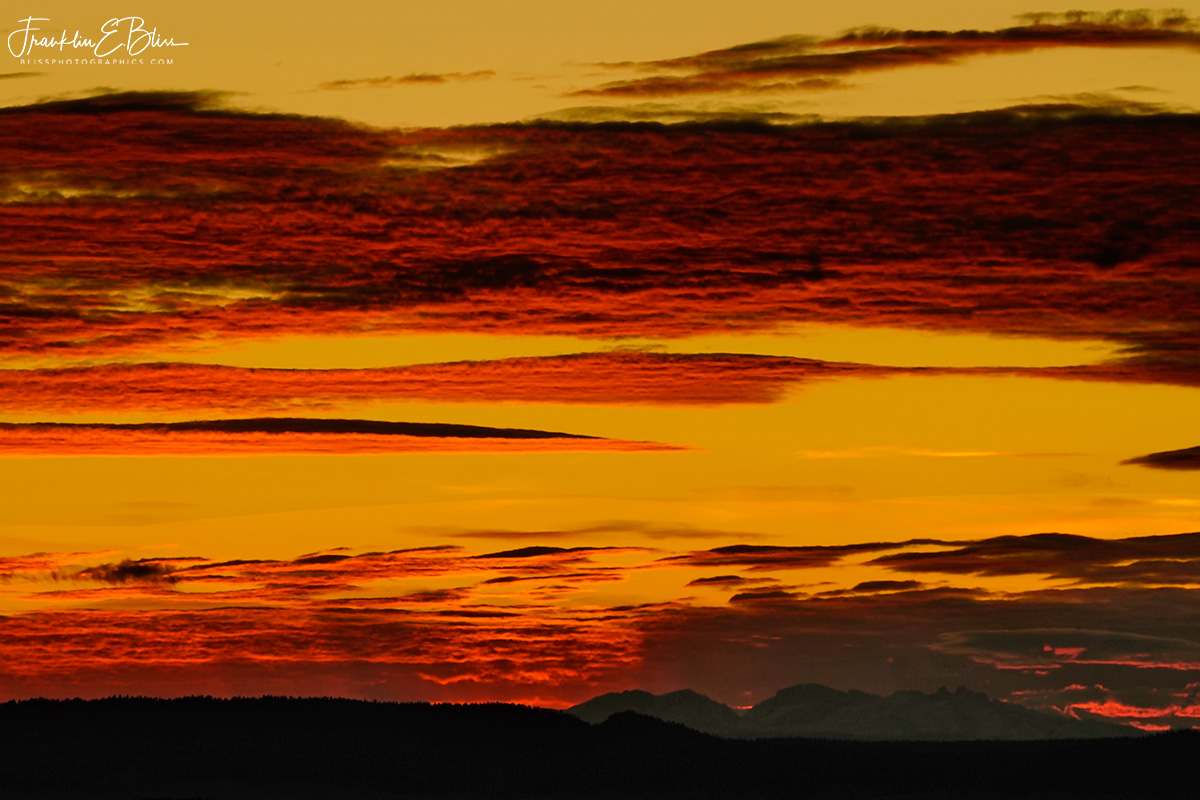 Full Screen is a good choice for this. . Twilight over the BigHorns was so obviously gorgeous. I had to resort to a time exposure to catch it. The timing on this sunset is very late in Civil Twilight. I was returning home from a Photographic Road trip. My driveway offered this view as I returned to base.

Civil Twilight after sunset ends about 28 minutes after the sun goes down 8 degrees under the horizon. It’s usually the best time to get those crimson and yellow skies. The yellow is Alpenglow. Atmospheric Ice causes this phenomena caused by refracted light passing through. Only the red wavelengths which have survived through hundreds of miles of atmosphere light the cloud deck.

The Big Horns of course are 130 miles from my camera at this location. The long lenses I use crush the perspective. The black ridge at the bottom is 40 miles out. The clouds behind the range are around 200 miles out I would suspect. The distance is hard to put into proper frame. Those 13000 feet high mountains appear smaller than the thumb on my outstretched arm from here.

When I don’t get detail in the landscape, you can assume that the lighting was pretty dim. I use very sensitive gear and this late, handheld camera work is silly to attempt. This is a 2 second time exposure. A rested camera at 1/15 th of a second is pretty tough to keep from blurring. 2 seconds you HAVE to have either a timer to initiate the shutter and a tripod/sandbag or your going to blur. I say if it’s 55mm and smaller that 1/50th is fine and stable unless your taking photos of moving things. The longer the lens, the more ANY movement will tend to blur. WIth a 800mm lens, if I’m working handheld at less than 1/200th of a second is rare and a rested camera.

My rules of Thumb for Handheld cameras shutter speed. (manual mode) all times are in fractions of a secondl You MIGHT get away with less and slower speeds blurring things intentionally is a valid photo technic. I’ve done that slow setting for a blur numerous times intentionally with bees and other fliers. Freeze the body but blur the wings composition sort of image…

These are just a rule of thumb and you can sure get away a bit on either side of those numbers. Of course the faster your exposure and the less light will enter the camera over the shorter period of time. You will have to adjust for fast shutters by either turning up ISO or turning down the F-stop numbers (bigger aperture). There are only three things to adjust in manual mode after all. You just learned one of them. 😀

Title: Twilight over the BigHorns