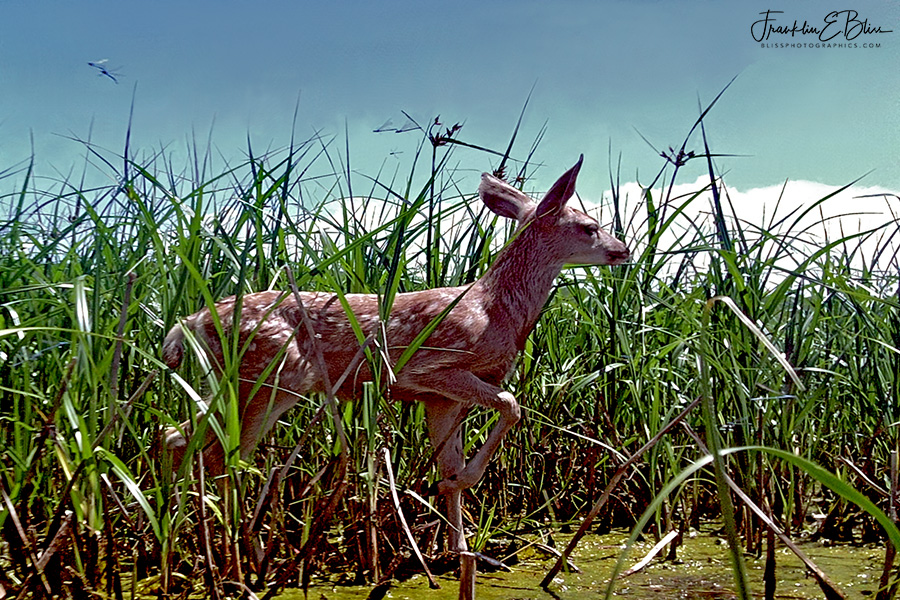 The wonderful scene is another one of my game trail camera amazing captures as the Dragonflies Hunt Mosquitos overhead. This fawn down in the wetlands was in the high grass on the muddy lake edge.. The automatic camera captured it dead center of the frame. Game Trail Cameras us Infra-red motion detection to trigger the shutter and like any automatic camera, will snap what is in front of them. Depending on the lighting, Game Trail Cameras can even take a good photo now and then. This is an amazing shot from one of the cantankerous things.

As I’ve said a few times before, each and every one has problems but this one is a pretty good capture. It took virtually no work to fix the built in image issues of the Game Trail camera. I get captures like this because 1: I run a lot of cameras with 29 currently in the network. 2: I place them in unusual places with viewpoints that are not just on a post at animal neck level. I often put cameras very low looking up or in places like this where it’s obvious by the trails that game frequents the area. Setting a camera up too high would resultsin the capture getting the tip of it’s ears. Properly setting it low in the spring just about promised me it would catch a fawn.

One of the few things you have control of with Game Trail Cameras is where you put them. I could write a chapter on placing game trail cameras.