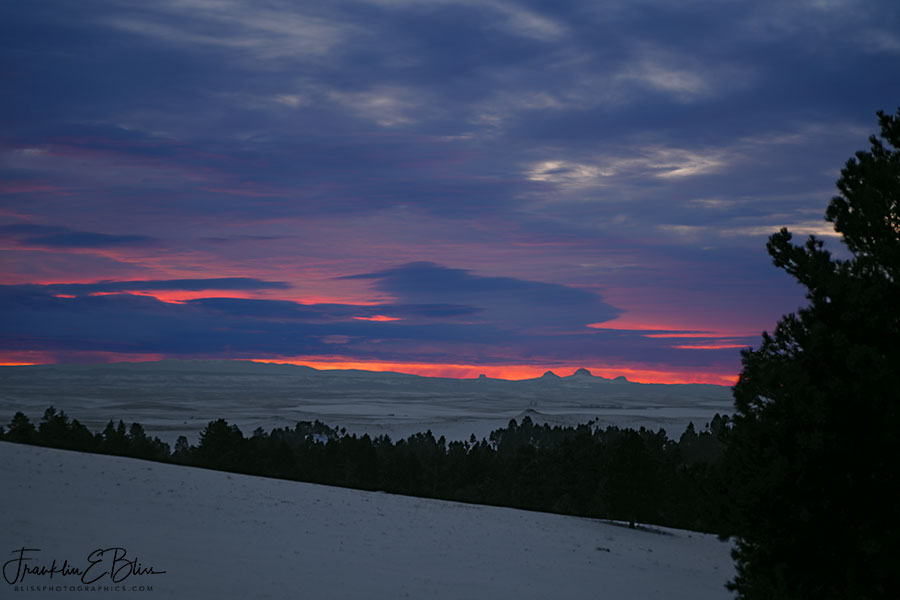 Crook County Wyoming has the 3rd lowest population of all other Wyoming Counties. A grand total of 7083 a decade ago which seems to be the most recent number out there. The area of the whole county is 2854 square miles and this photo covers about 1/2 of that quite literally.. It’s about 100 miles to the horizon which is in South Dakota partially.

On the left horizon is the Bear Lodge Mountains pushing up into the cloud bank. That range has a mountain up to 6480 feet above mean sea level. In contrast the lowest point in Wyoming a few miles away. Located where the Belle Fourche River crosses the border into South Dakota at 3099 feet above mean sea level. That river bounds those mountains to the north with most of the drainage from those mountains west side draining into same.

The Bear Lodge Mountains are geologically related to the Black Hills Uplift. They are actually governed as part of the Black Hills Ranger District. Exposed on the high peaks, a few deep sourced igneous rocks outcrop there. This testifies to the scale of the upheaval geologically. To the right, both Devil’s Tower peaking up center of the horizon along with the “3 Sisters” otherwise known as the Missouri Buttes. These both are volcanic rocks. These formerly deeply buried volcanic pipes/necks intrusion into the surrounding sedimentary rocks stand above the plains. The softer sedimentary rocks being removed by the LIttle Missouri Drainage and the Belle Fource Drainage one sand grain at a time. Such things take a while.