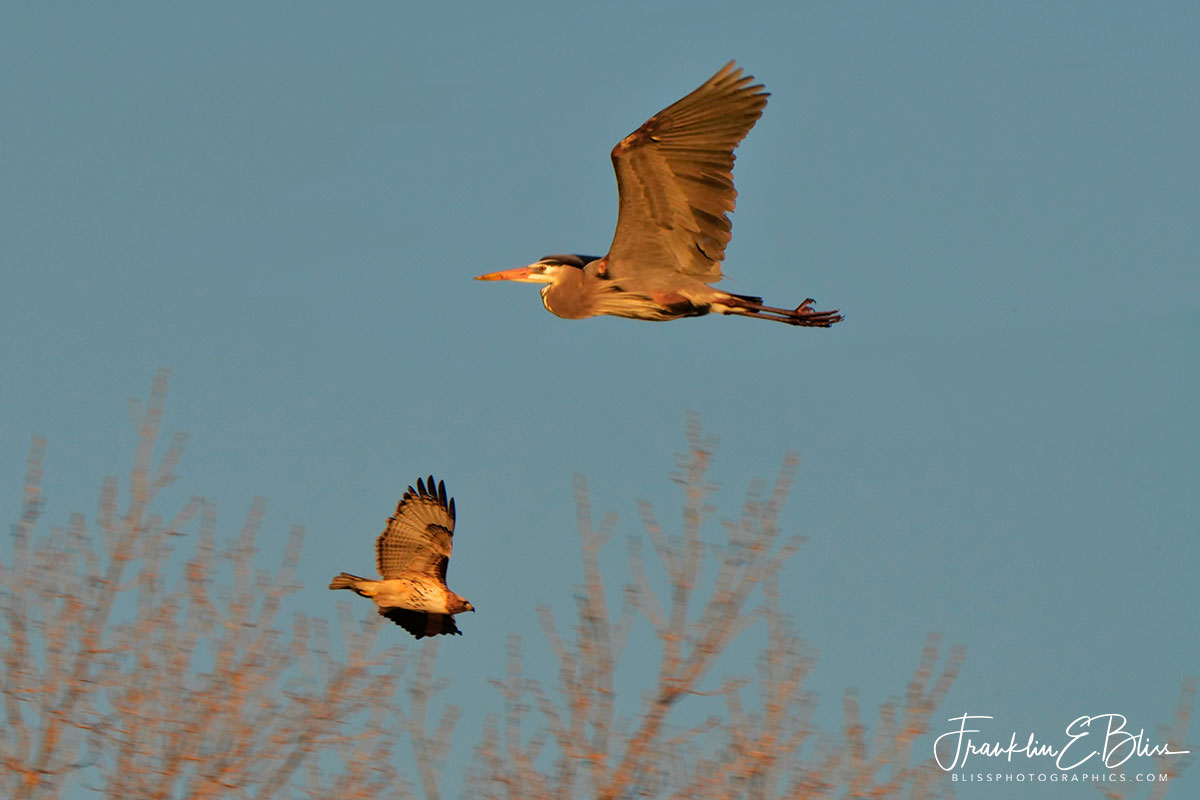 Photobombing Hawk. This image is so deep it almost looks almost fake to me but I swear I did NOTHING to this other than some shadow work to bring out some hidden details under the birds wings. The edge detail on those birds is just SPOT on focus as fine as I have ever seen at this 150 – 200 yard distance. The trees behind were blurred (bokeh) as I relented F-stop/depth of focus for gaining shutter speed here. I gained sharpness doing so in the zone that is in focus. The lighting was early morning hard right over my shoulder. I’m thinking the “field of focus’ is maybe 4 feet deep at this distance. The 3-D appearance of this stunned me in it’s depth. Closing speed has got to be 100 MPH. Both birds were cruising with the hawk veering away the last second!

Calling this unlikely would be an understatement lol. I was tracking the Heron with a partner of his across the tree line. 50 feet high Cottonwoods house their nests. A 1200 mm lens, 28 inches long resting on my trucks glass. (lens is padded) I saw them incoming a ways off . Fortunately I had a few seconds to “spin the dials” in anticipation of a 1/2000th sec shutter speed. (see above for some more camera on manual mode hints) So I got lucky on the light. I was “machine gunning” the camera rapid fire. I also caught this raptors partner diving in as well but it is well out of focus in that capture. A total of 3 hawks dove at this Heron Pair that had already claimed a nesting spot on the trees. They are all building nests at the moment down at the ranches wetlands.

Raptor War: This week I found a Red Tailed Hawks body at the base of the tree the Heron’s nest in. Photo of such on my web gallery. It lays there still as it’s illegal to collect any piece part or even a feather of a Raptor or most other migratory non game birds. (Fed Laws) I’ve seen Herons there every year for 20 years.