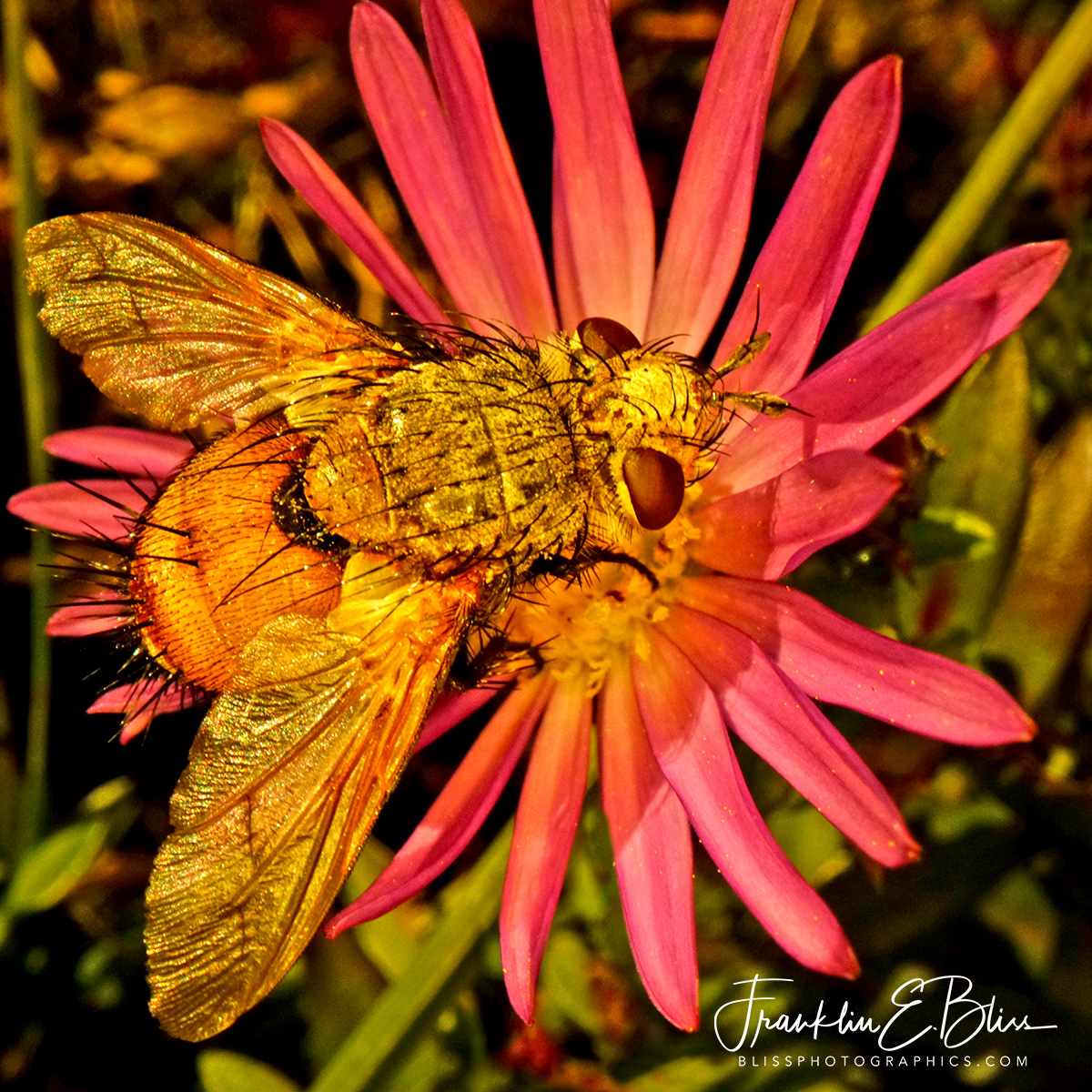 This is the third image I finished from this photo session with a Gold Tachnid Fly. Tachnid Flies as a group are wonderful things to have in your garden. They kill major insect pests that destroy our crops. Kind of a big fly, really bristly and quite a vivid appearance highlights this Tachnid Fly Gardeners Friend #3.. This capture is by far the best of 3 in the series technically. Also artistically really from this time line of finished images. The Asters were post frost pollen providers here.

In an unusual manner, SOME species of Tachnids actually have their eggs develop in their bodies. Thus giving birth to live larva which they deposit readily in caterpillars and other crop eating insects. As a group they do a tremendous service to us in general. The adulst are around your garden to drink nectar through that have their ulterior motive for visiting your garden. They inject their larva (or just eggs under the skin so the larvae will slowly digest the host bug. Killing the host as it develops. (more on this later).

Sounds like an early Japanese Horror Film. Some species of Tachnids lay a live larva on a leaf and it will crawl around looking for a host to burrow into. Then it will eat and digest it slowly from the inside out. The larvae (of course) start on the least important parts of their host to keep it alive longer. Kind of like Cow birds and Cuckoos laying their eggs in another nest.

But these guys have the added feature of killing the host. Classy Lifestyle if I may say so. . Parasitic reproduction for sure but these are not animal carrion flies that carry disease about. As I’ve said, they are our friend. Good thing they only pick on other bugs that tend to eat our crops. The eat nectar, pollens and saps as an adult. This one is munching on pollen from the surviving asters after the first heavy frost. Not much else to eat out there.

The lens I used for this is a little odd being about 2 feet long. It is only an inch in diameter. It has LED lights at the end around the lens. They tend to be a bit yellow in general but yellow plus gold is vivid. . Being “Ultra macro” with a very deep focal field is rare. Getting the fly and mostly the flower in focus is an amazing performance . Even more so considering the “plus” size that these Flies are. He’s at least 1/2 inch long if not a tad larger. Getting this close to a fly feeding with a bright light….. Esier than without the bright light 🤔📸 or so I’ve noticed.