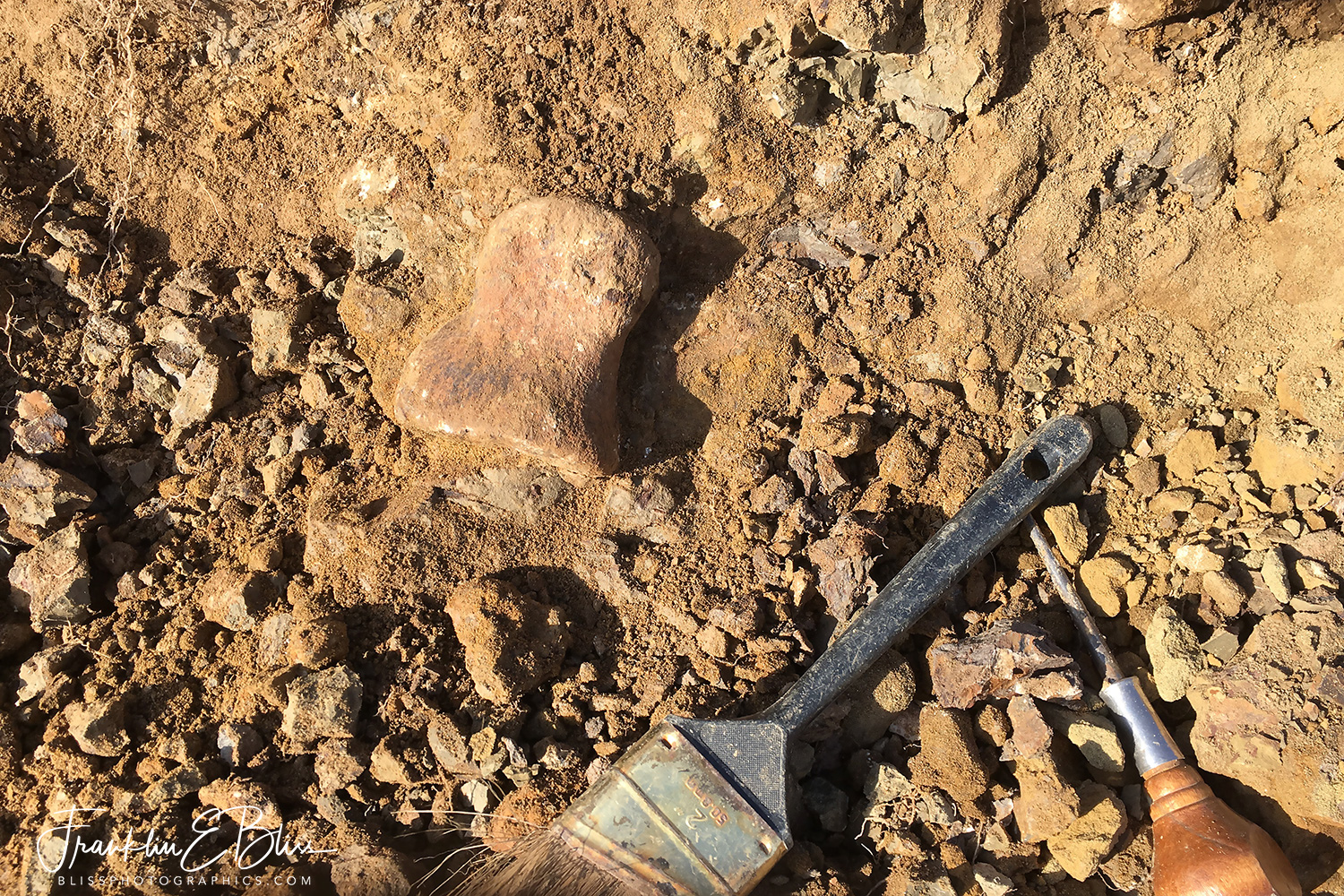 The latest Cretaceous Age here on the Bliss Dinosaur Ranch was a time of fine grained sediment accumulation deposited from huge rivers. These rivers were sweeping back and forth across the landscape choked by the sand and finer grained sediment load they carried. Sand sized material was the rule for these rivers ability/capacity to carry things down river. This Triceratops Toe “Phalanx” Fossil survived it’s transport from the distant past to the present under my gentle brush.

With the exception of isolated small scale deposits like this, the Hell Creek/Lance Formation is largely barren of fossils. In 5.5 square miles of HellCreek/Lance formation on my ranch, only about an acre can be called ‘fossilferous”. That acre is the total of 25 smaller locations (microsites) and a bone bed Triceratops Toe “Phalanx” Fossil sits here “In situ”. (In place in the undesturbed bedrock).

This fossil is positioned in the outcrop deeper than you might suspect. Your looking at a toe bone physiologically behind a claw/nail. it is 4 more inches deeper into the outcrop so this is the top 2 inches of the bone exposed. Triceratops had big toes lolol. It’s deeper than it is long. I like to take photos of fossils in the outcrop as it’s sort of the “Eureka”/adrenaline rush moment.

Geologic Musings on this ranches “Dirt”:

Geologists consider the Cretaceous to have ended 66 million years ago. This toe bone has literally not seen the light of day in that unfathomable period of time. The sediment it is in, is a mix of sand, clay with chunky chunks (up to 2 feet) of torn up river bottom clays. The ripped up chunks of clay were rounded by bounding down a river/transport. There is a 2 foot thick or so blue clay pure of any fossil or other detritus directly under this 3 foot thick channel. That above that clay is a channel packed with chunks of clay/mud from upstream. . A mix of at least 3 different mud chunks from various sources nearby. I’ve seen chunks of mud angular like they got torn up 50 feet up stream. So this is a “channel” I’ve been following that tapers on either side that filled up with ripped up chunks of upstream river bottom mixed with a variety of bones from who ever was walking around at the time.

The bones were dropped here for me to find because the river waters slowed enough in this location to drop them out of suspension here mixed in among chunks of mud. The spaces between the “Cobbles of mud” are filled with sandy material that “Sifted in” from the flowing water. This is classic river sedimentation/deposit stuff. That is where you find the little fossils too. Sands mixed with smaller rounded pebbles of river bottom clay. It’s all part of the “Bed load” of a river and what is in it depends on river current velocity… (followed by a really long discussion lolol). IF the river is fast enough to move