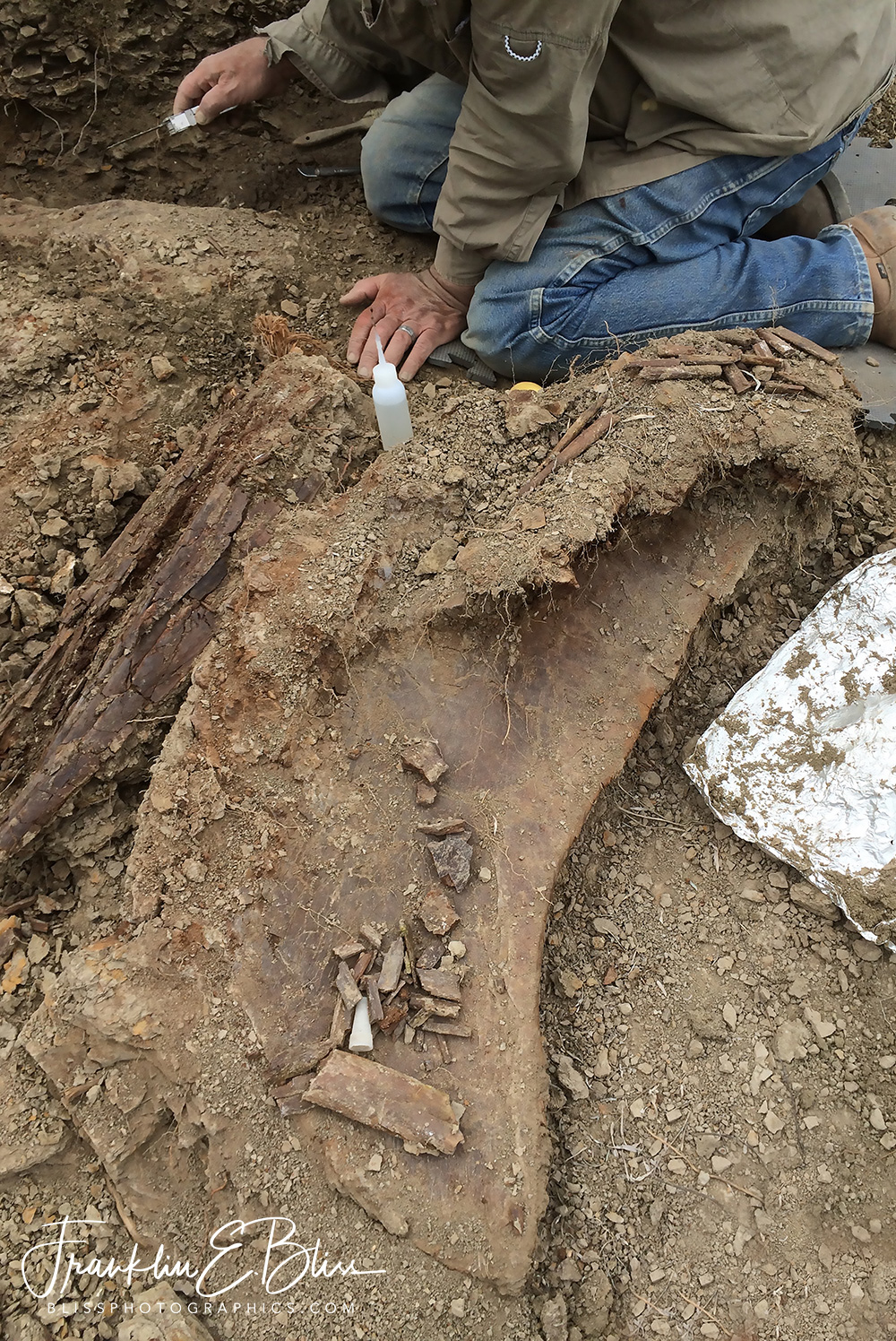 Pelvis, Tendons for the tail of a Triceratops “In Situ” (In Place)

This Triceratops Pelvis with Tendons (ossified tendons) adjacent just left from the ligature supporting those massive heavy tails. Here is shown exposed from one of our “digs” up here. This animal was around 20 percent there with 80 percent missing as it were. More still of this animal may be at the site. It’s probably about 1 inch below or deeper into the hill than where we stopped digging. 🤣

Tools of the trade are brushes, Wood Awls, Superglue and of course shovels and wheelbarrows. Named the Triceratops “Doug” after the rancher that gave me permission to hunt on his ground (this is about 1/2 mile off my ranch so this was legally his fossil). The land owner owns the fossil unless you have been told otherwise as is the law with fossil remains generally. Very close to the Montana Wyoming border, this is Lance/HellCreek Formation. This is a dinosaur bone from the end of the rule of dinosaurs. Uppermost Cretaceous with perhaps 200 feet of Hell Creek/Lance Fm above this before everything when BOOM. Hell Creek/Lance is about 700 feet thick sandstone/shale sequence. It’s all river/lake sedimentation.

I first started this excavation in 2006 when I found a partial brow horn from a triceratops walking this hillside. . It was all by itself down hill from the side about 30 meters. It even a little right of the final location for this Triceratops carcass. This threw me off for a day or so finding the actual fossil bearing sediment. (It was a big hillside). Fossils laying on the surface came from somewhere. Usually either right where they initially found are OR somewhere up hill of which this one was steep and big. It could have come from ANYWHERE up slope. (That Discovery piece is a wonderful fossil too). The site was finished 3 years ago now soon after this was removed. .

Remember it is illegal to collect vertebrate fossils from State, Federal or Tribal Land. Only private deeded land is OK to collect from/on. You want written permission from Tribal land management and only state authorized digging can occur on state ground. BLM is a tougher nut to crack so generally if you find a vertebrate bone of any significance on a piece of federal/state ground, leave it there. Don’t neglect a report it to the local field office of the BLM. (not that “Brontosaurus Lives Don’t Matter” but I refer here to the Bureau of Land Management lolol). It’s best to have fossil agreements in writing. Just my 2 cents. I point you to the BLM website for more specific instruction on the law as I’m not a lawyer.