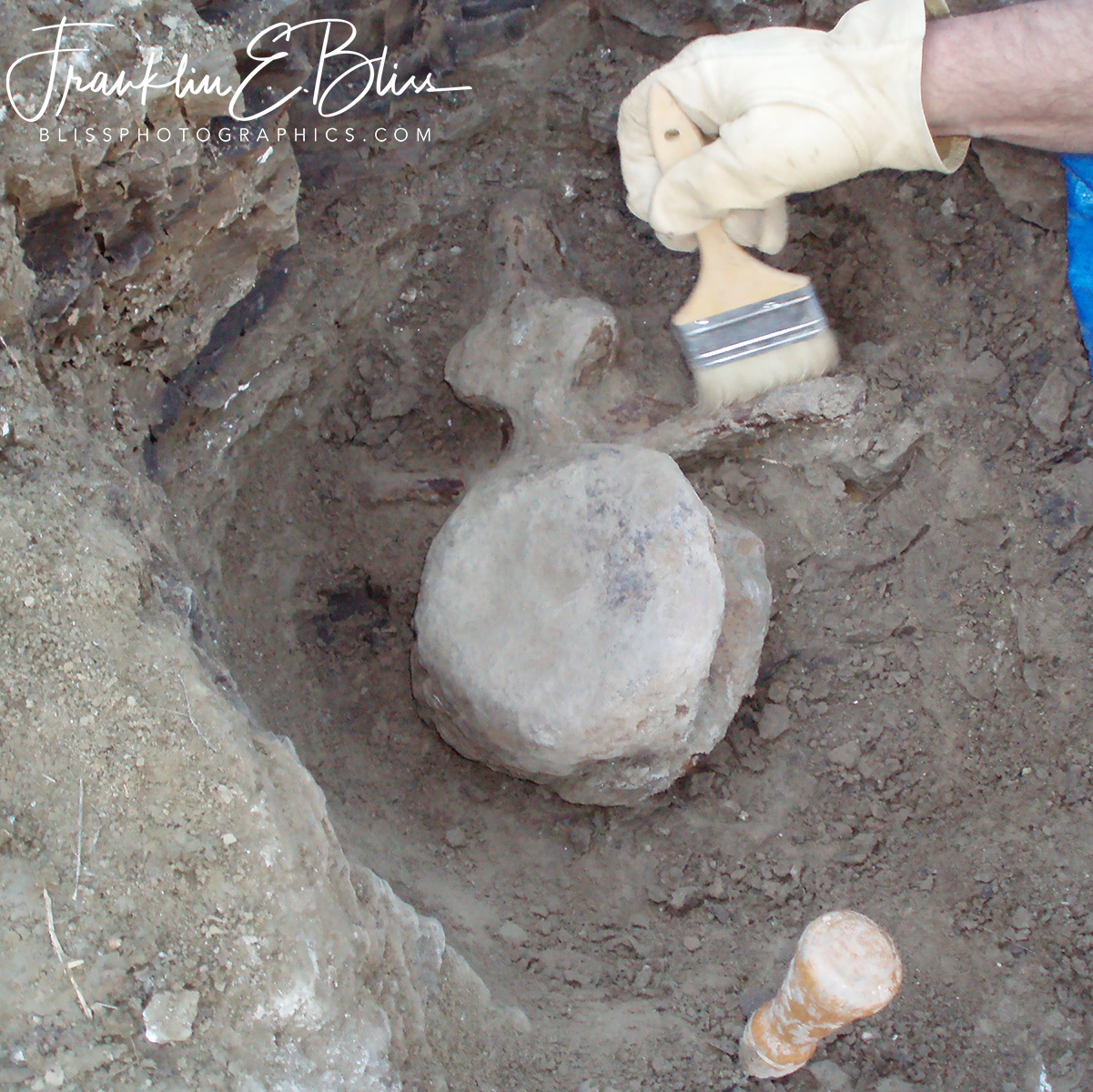 While finding a Cretaceous age Triceratops Vertebra with Processes still attached is possible, it doesn’t happen very often with an isolated fossil not attached to another bone.

I spent many years working on determining paleo-environments. It the environment of deposition that produced rock deposits. This can be determined from any number of clues left in the rocks. (Wrote a Masters thesis on this). I am biostratigraphically and sedimentologically very aware of how this Triceratops vertebra with processes got to be here…cer. There are many indications to what was going on during it’s deposition. This Bentonitic Clay rich Mud was on the edge of a lake. This deposit consisted of what was then Volcanic Ash as a “dump” was washed into the lake hydraulically. That washed in volcanic “mud” made a “deltaic” intrusion into the much larger lake.

This particular bed of sediment I have traced over about 2 square miles. I loose visual on the bed as it disappears either underground or has been removed by erosion. So this was a pretty big lake and a big delta deposit into that lake. Represented is not a high energy Splay deposit that might exist next to a big natural river levy (highest things on the landscape probably). It’s not high energy like a splay proven from the lack of larger chunks of plant matter….

There were BIG rivers sweeping back then. Sweeping back and forth carrying LOTS of sand during this time in Wyoming/Montana. The sand was mixed along with this finer material (clays) by the boat load and dumping it. Low energy let the fine clays settle out (like in lakes). Otherwise the clays (size term just like sand) would stay in suspension in agitated water. This had to be a calm environment like a lake. Most of my Hell Creek Fossils are found in RIver NOT lake deposits by the way lol.

That volcanic ash was altered over the 66 million intervening years into “Bentonite” which is an incomplete description of the sediment. Bentonite is just ONE Clay mineral that is represented here. Dozens of clay minerals are in this mix. Digging in this stuff is like pushing a wood awl through very thick hard modeling clay. Sometimes you can get it in a few inches, others just a quarter of an inch. You stick and pluck the awl and slowly clear off sediment to facilitate this treasures removal. It’s all very moist and most of the fossils have a white crust around them. They usually clean up beautifully brown.

Maybe 20 percent of this Triceratops was recovered nearby this isolated Triceratops vertebra with processes. We finally all gave up looking for more of the carcass. It could be 1 inch down and we wouldn’t know it lolol. It’s bones were obviously scattered/fed on and stepped on after it floated into the lake at least once. I noted that ALMOST all the bone fossils in this deposit were laying flat horizontal to the lake bottom. One rib was obviously stepped on as it was broken in half with 1/2 of it being vertical. It was pushed down into the mud by someone walking over. I’ve found coprolites (fossil poop) here too. This would be indicating that active feeding and pooping was happening for a while. Also found a smaller raptor tooth in the mix. (Dromaeosaur richaroestacia. (sic).

The soft organic rich mud covering the fossil was rich in small fragments macerated plant matter. This is an obvious lake deposit covering several square miles at a minimum. The energy was very low here. Calm water, no doubt shallow as the wading dinosaurs confirm. There was not a lot of topography on the Hell Creek Formations mostly sandy river deposits on a broad sweeping plane. Much of a rib cage was recovered along with a scapula and several other very nice fossils from this animal. I found this site by tracing a big chunk of Triceratops Brow Horn back up hill to where it came from. Took a few looks lol.