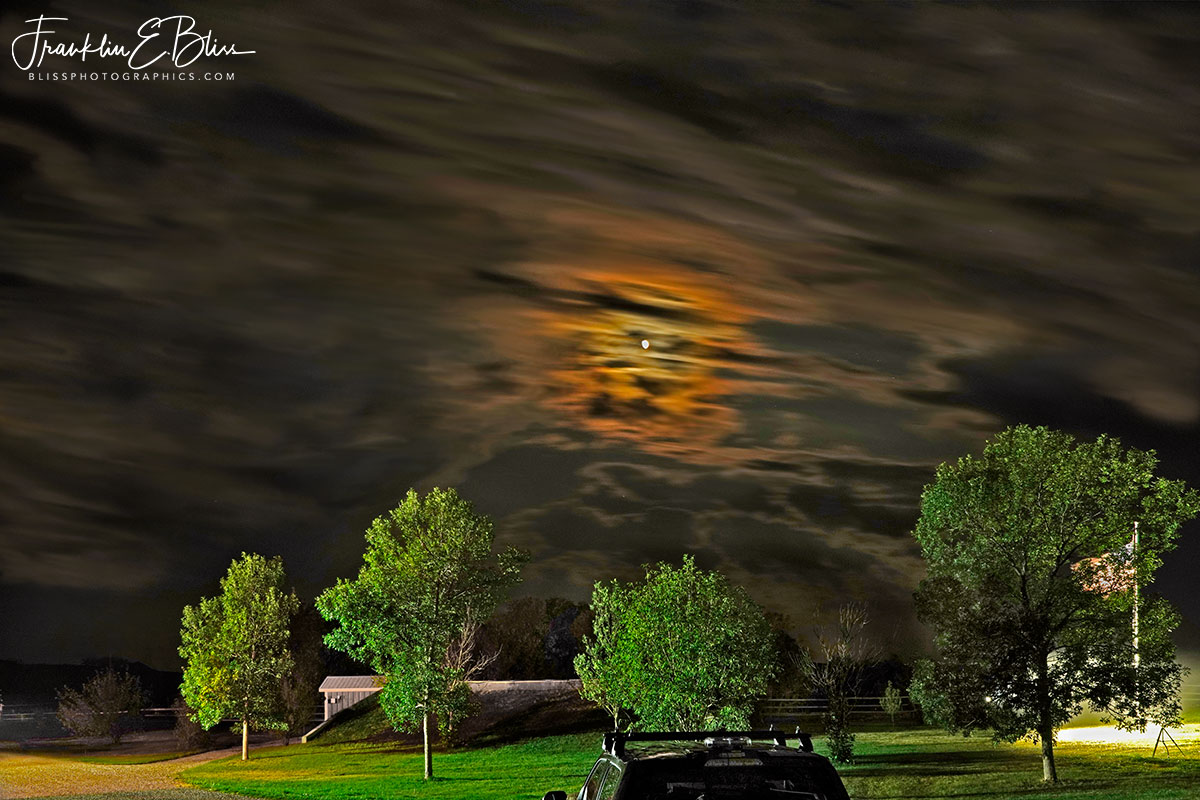 This Waxing Gibbous Moon was bright behind those clouds relative to the dark around. Some stars are in there too. This is a 5 second time exposure around 11 PM one mid-August 2020 night. Typical for a well exposed time exposure. Well saturated the colors are. The foreground captured with ambient yard light. Taken looking south off my front/south facing covered porch on Tripod… Here at ranch headquarters, give the camera long seconds of shutter open. It’s hard to tell the flag was even moving because the breeze was steady at 15 mph so it was fluttering pretty stiffly. The leaves in front effectively hide the blur. “Clever Girl” at the bottom center of the photo got in my way a bit watching the scene unfold.

I was watering the yard with a sprinkler over by the flag pole lol. I had to overexpose that area to get the rest of the image though. Our Night time, sun activated photocell now shines a modern 200 watt LED at old glory. We have kept flag lit for decades on that 35 foot mast. I put the flag pole in and have fixed it several times over that interval. It was a piece of double wall oil well drill stem pipe. It’s a strong one but the wire…. The best wires to hold the flag wear out eventually. Repair interval is about 5 years. It’s windy up here. Segue…

Speaking of wind… Those clouds are moving right along. They were running not walking through the sky that night. I did a dozen of these time exposures experimenting with where to start with regards to the moons position. When the bright moon, 1/2 a second from being obscured by cloud was shot, magic happens. That mean a differential quick cover (short exposure) of just the brightest thing in the sky. The cloud closing the light down over the moon. Timing is everything as it worked out. The time exposure gave the fast moving cloud cover a chance to blur and get satiny silky smooth. You couldn’t have seen the lit up veil without a differential exposure.