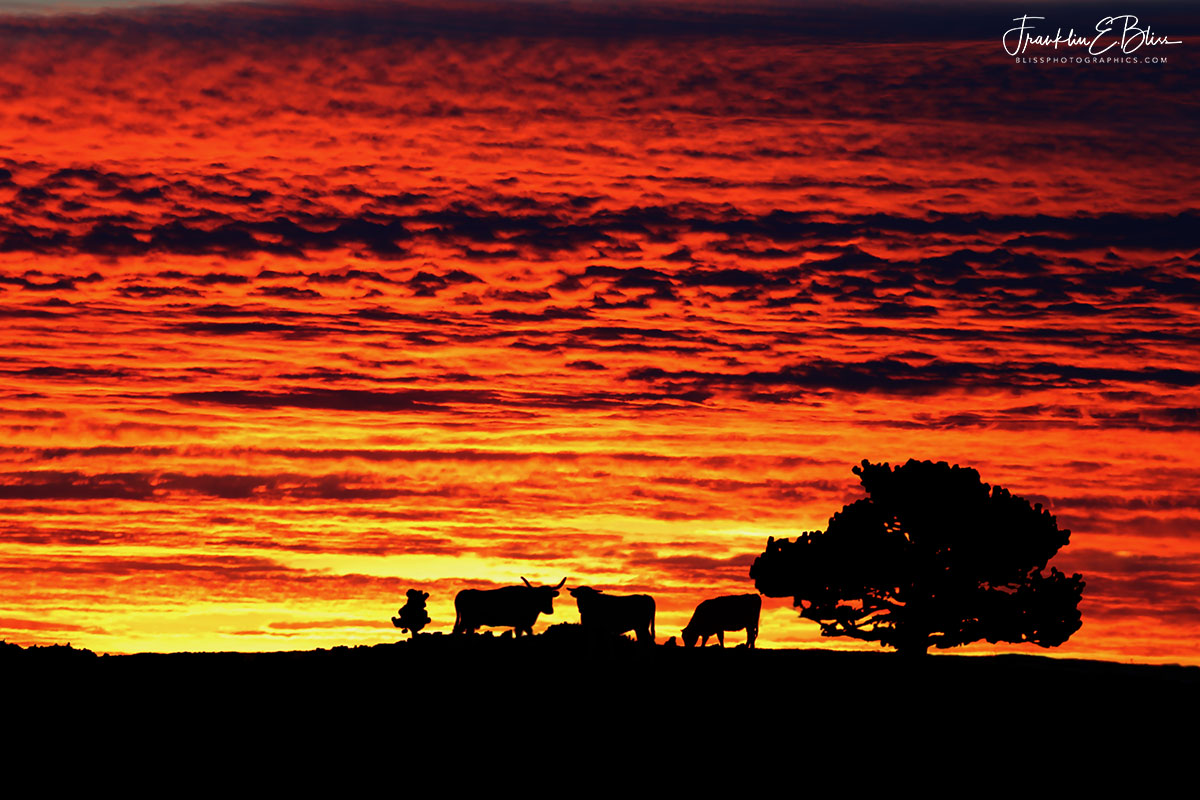 Corriente’ Cattle have been on the ranch since 2012. We have Black Angus too but these guys are much more photogenic. Something about the horns that gives them a western look.

Fully covered skies where I catch any animal that I can silhouette are automatically better by their inclusion. I would indicate that everybody was looking at this sunset that evening. I’m sure that even the glutton on the right took a few seconds between chews to enjoy this vision. It was hard not to notice this sky show. It stands out in all that I have seen as pretty impressive….

This can only happen during a totally overcast evening with thin / spotty enough clouds to allow the light to get under the canopy. A cool night, this particular evening was very moist with alpenglow rife to provide this colorcast to the show.

Bear in mind that this is a long range telephoto shot so the area of the sky wasn’t as big as this perspective would have you believe lol. Telephotos crush perspective and you never know how big an area of sky you are seeing. This frame covers an area of sky about the size of a postage stamp at arms length at the horizon. It’s a mind bender I think. This was a good night for images as this held on for 10 minutes anyway. That gave me plenty of time to get around… Click … 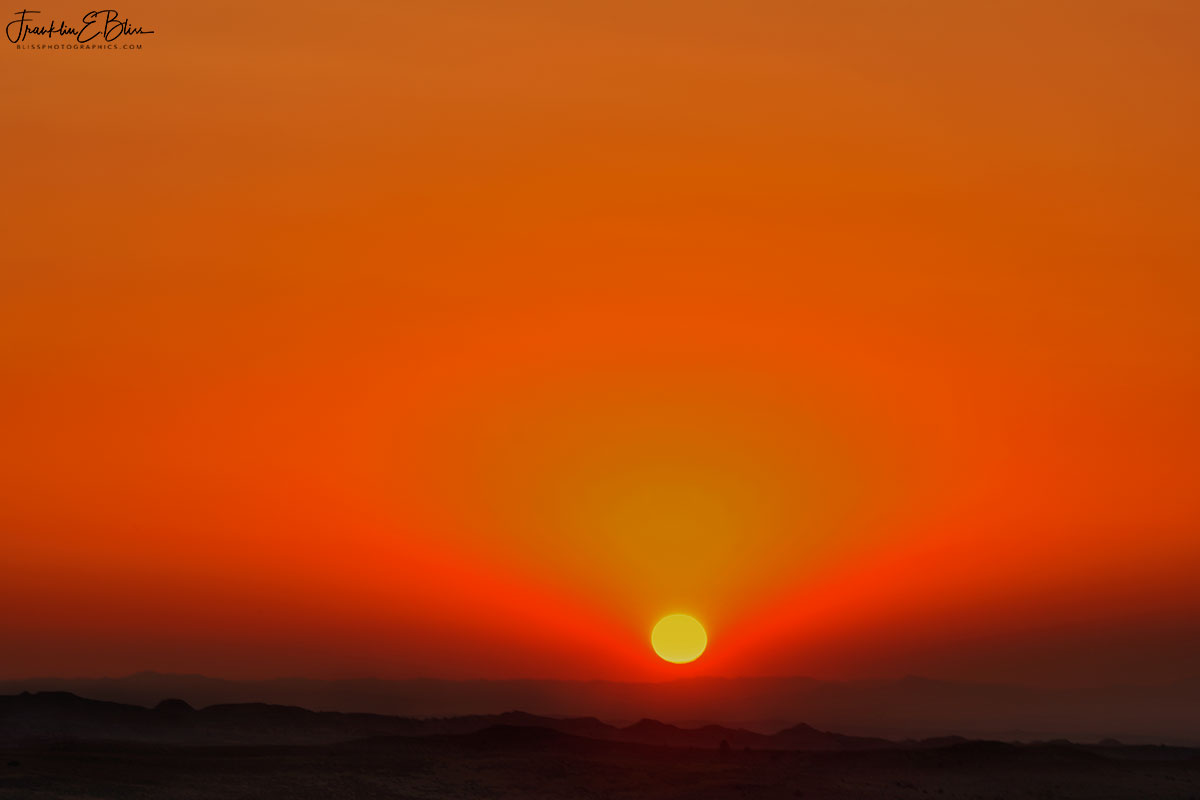 I titled this Shock but I could have used Bow wave just as well. The atmospheric phenomena you are seeing here is a very complex interaction for sure. The color is real as is the wave in front of the sun. I was watching this clearly on my video eyepiece just as you see it here. The Pall of Smoke was significant even for recent standards.

Amazing light effects occur in a heavily occluded / smoky atmospheric haze. I have views looking west from the local that reach out 93,000,000 miles to the sun. Between myself and the sun are many miles of atmosphere acting as a filter to all but red and yellow light. (With all gradations in between like orange).

I think there are a lot of things going on here with the color and the gradients. You will note a baseball diamond shaped area of yellow above the sun is the highest sky where yellow can penetrate with a given intensity. (a calculus equation or two involved here I suspect chuckle). Less smoke between me and the light there. Below on the wave, only the red light can penetrate the haze. The closer to the sun, the brighter the light the haze has to block. The curve will be smooth around the base. Mother Natures Geometry at her best artist strokes. I love smooth gradients but naturally stepped gradients are massively cool. Maybe it’s just me chasing light again lolol.

I’ve seen this only a few times in my travels. I suspect it has a name but I haven’t researched it. 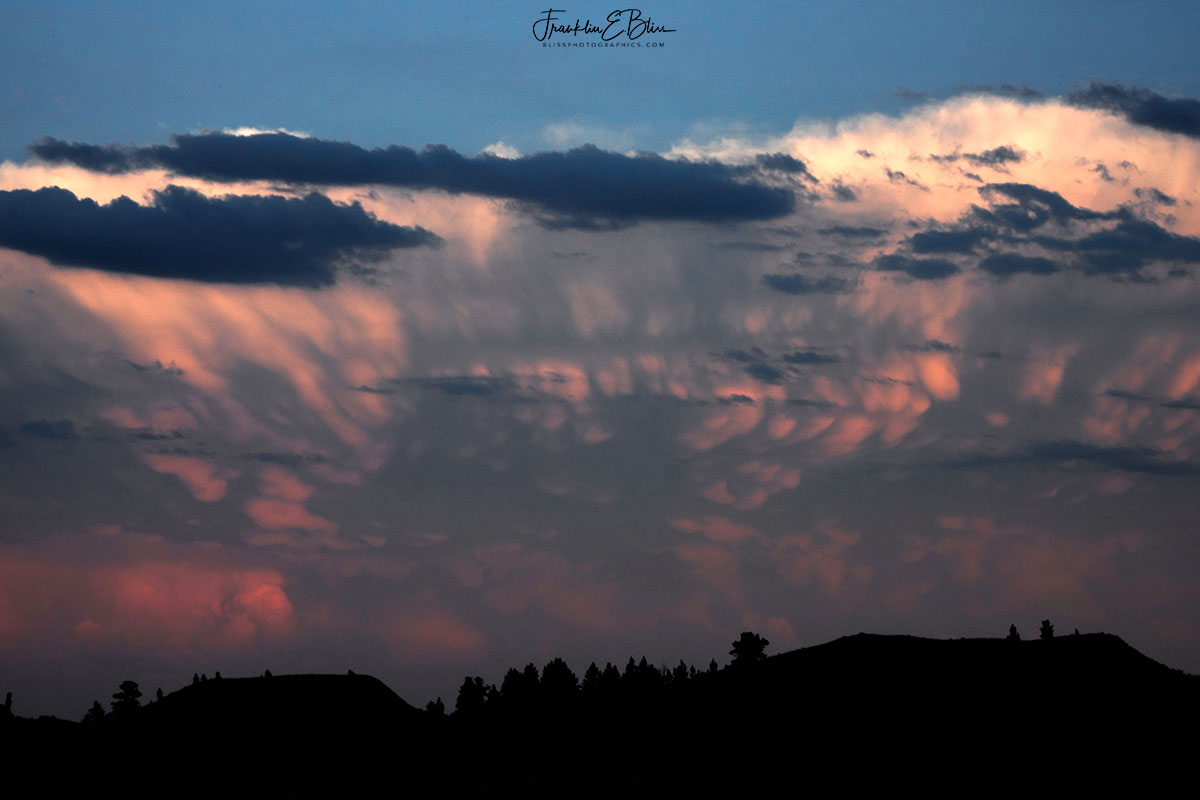 This storm hailed on me an hour prior to this click. I tend to follow behind these guys around sunset. Some of the scenery I see doing this is otherworldly. It was very dark on the ground as the silhouette shows. There was no way to properly expose the clouds still keeping the ground visible. Usually I can pull out the ground detail in the digital dark room. Not so much here. So I consider it a good use of negative space here lol.

This storm was quite a sporty little spitter on it’s way through the area. It was big and had a lot of various rain / hail shafts for me to run from lol. There were rumors on the weather there was golf ball hail on going somewhere under that. I was hit by marble sized hail. It seemed to follow me that night on the way in lol. I went 10 miles away from the homestead trying to get the photographic angle. The proper location is everything.

The Pink light is the “Belt of Venus” effect that is so common with a bunch of moisture in the atmosphere frozen or fluid. The pink light survived the longer trip through the low atmosphere. This light reflects back off the clouds to my photon capture boxes. There the photons are converted to electrons and stored for me to work on later. Have to love technology. 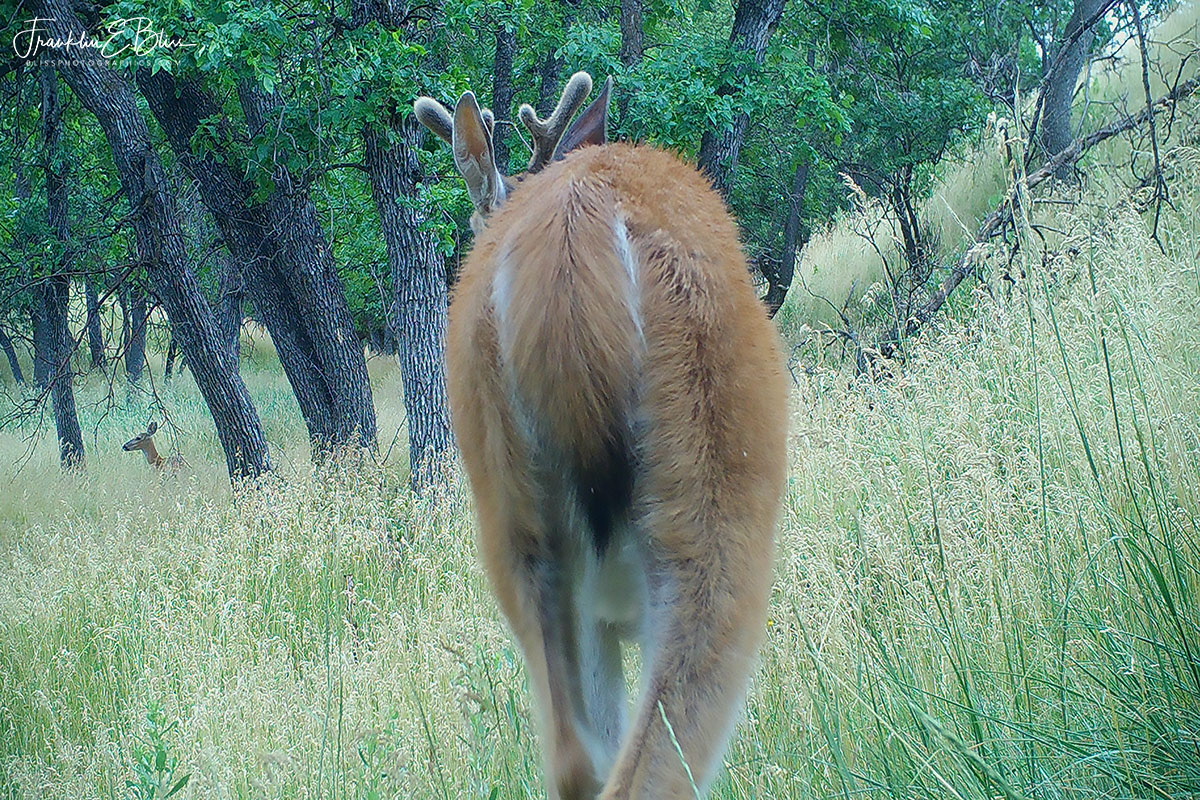 Whats the difference between deer nuts and beer nuts

Sorry about that. I was so sure this post would be the butt of many jokes, I figured I’d pre-empt you lol. I’ve seen a lot of good photos of buck faces, I haven’t seen too many good images of Buck Butts. This game Trail Camera caught this young buck with velvet on it’s growing antlers. He was on his way to meet that gal sunbathing in the grass down range.

This image was late spring. My delay on Game Trail Camera captures can be considerable. Might be 6 months at times over the winter. First of all it’s been months since I’ve serviced this particular automatic camera. It sits down in the wonderful grassy wash deeply hidden from the outside world. This drainage is a world unto itself of old cottonwoods and cedars. Grasses up to your waist with a notable lack of noxious weeds. Something that contaminates from the outside those weeds like Canadian Thistle whose seeds blow in with the wind.

The soil/ground here is undisturbed by human machinations. Maybe a fence post hole or two along it’s course. Unchanged by European Man is this ground. As a pre-historic note… I point out that there is a documented “Clovis Man” 10,000 year old archeological site 10 miles from this spot. I’m thinking those same paleo-lithic types walked this valley. Just a tad bit before I did.

The Mule Deer as a species survived the extinction of the Megafauna. The Clovis Man culture disappeared into the mists of North America as the Glaciers Melted / Ablated away. The deer aren’t telling the story. They sure seem to have a genetic memory. That to be fearful of two legged creatures…. humm. 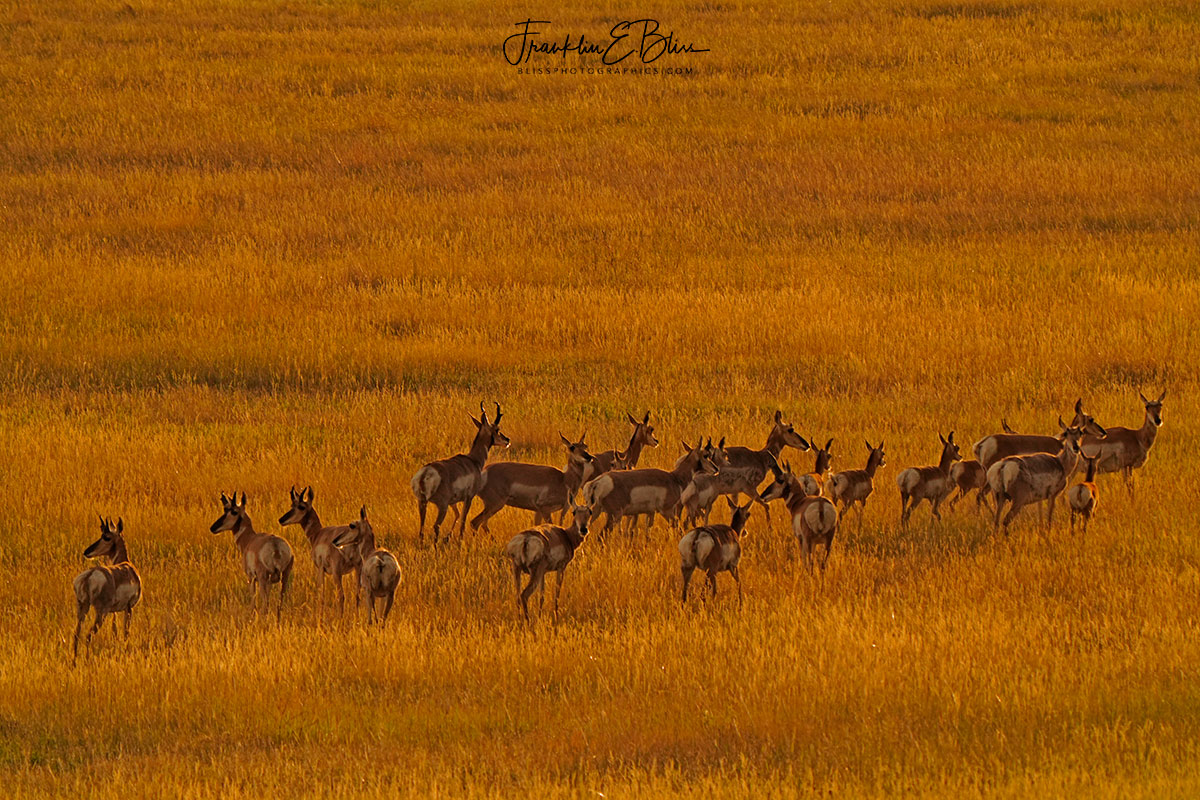 Abundant Pronghorn live on the western plains. One of their major wildlife refuges is the Thunderbasin National Grasslands. Made up of several blocks of land just to our south, the Grasslands are huge. All these animals migrated from the federal land refuge in the spring to pasture on the surrounding privately owned ranchlands. Summer pastures versus winter pastures. These animals have been doing this for the last 10,000 years at least.

This late in the summer, they are starting to group / bunch up. Earlier in the year the does break off to give birth. The males get in small groups. The males will slowly get control over the loose females in their area. Then the serious stuff begins. I count 3 bucks in this group.

The rut is coming very soon and may be happening to one degree or another at the moment. I’m not sure what the rough environment this year had on their activities but I usually get close to rutting activity. Trail Cameras do work for me 24/7 and I get a lot of opportunity to see Pronghorn in and around the ranch. I see some groups two times a day. Depending on how they are feeling, occasionally I get lucky and can move in close. When the groups are this big though, they get collectively and synergistically jumpy. Life in an ocean of grass. 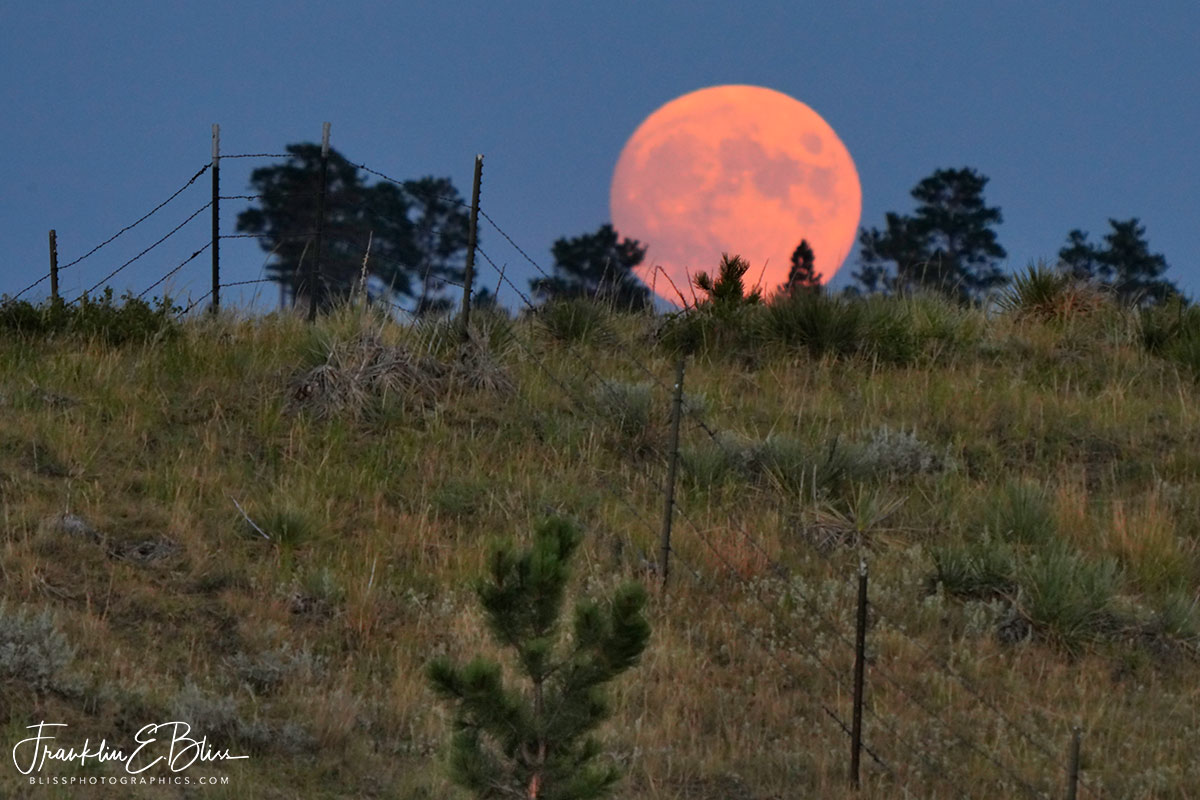 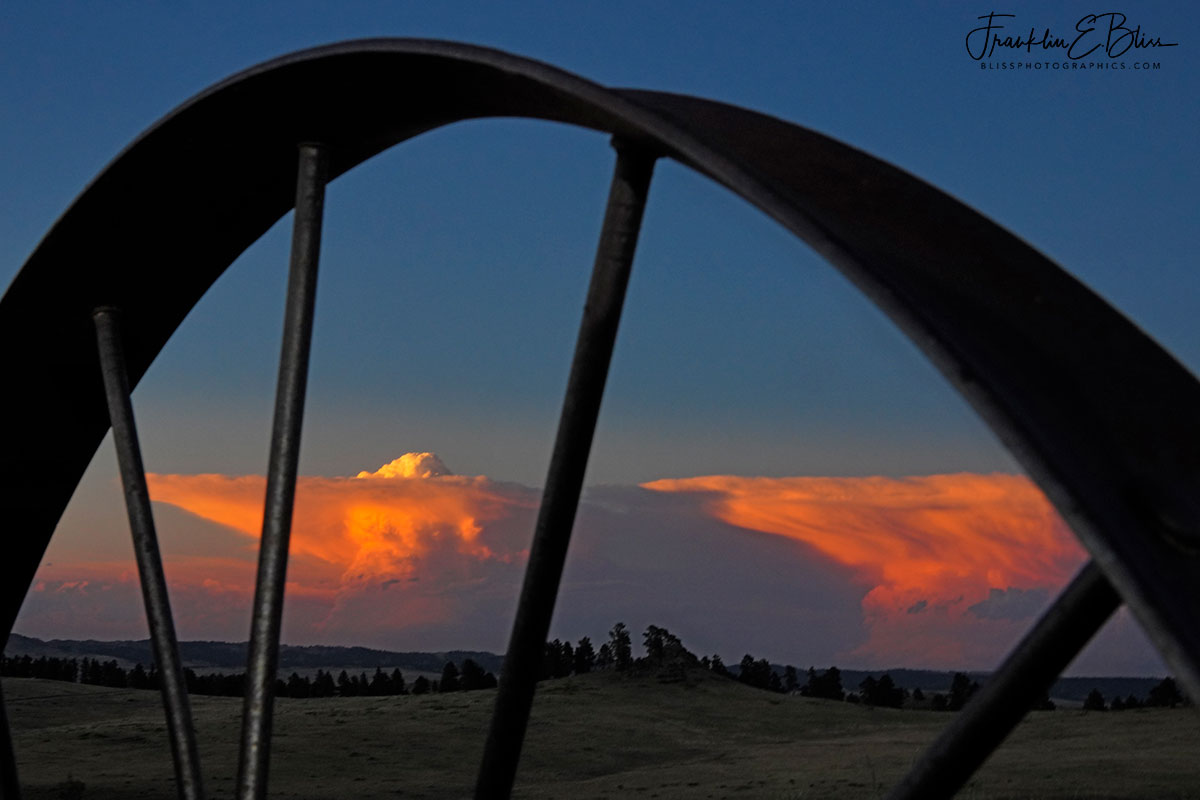 Belt of Venus pink light reflecting off of the projector screen that those two HUGE Mesocylones become at this time of day. The sun had already set. THe shadow of the horizon was climbing up the massive storms base toward totally shadowing the screen. The right independent storm was in deep shadow of the storm to the left. Both were dangerous to be under. They were 80 miles to the north and a bit east from my location here in Wyoming. Hoovering and pounding on the Ekalaka Montana/TriState area (North Dakota, South Dakota, and Montana).

IT’s easy to see something 30,000 feet high from only 80 miles out. Clear twilight air after similar storms moved through our area made them look just over the horizon. Clear as a bell with most of the dust washed out. The top of the tower on the left still being illuminated by the first yellow light affiliated with the “golden hour” sunset. The bottom of the cloud in horizon shadow. That is pretty much the entire gradient during late sunset with the horizon rising over my shoulder. The sky high above is still blue as it’s being illuminated by mostly unfiltered light still with Blue color remaining. THe lower atmosphere filters out the blue leaving only the longer wavelengths to bounce back to my camera. You can clearly see the hazy layer terminating just above the high cloud tops. 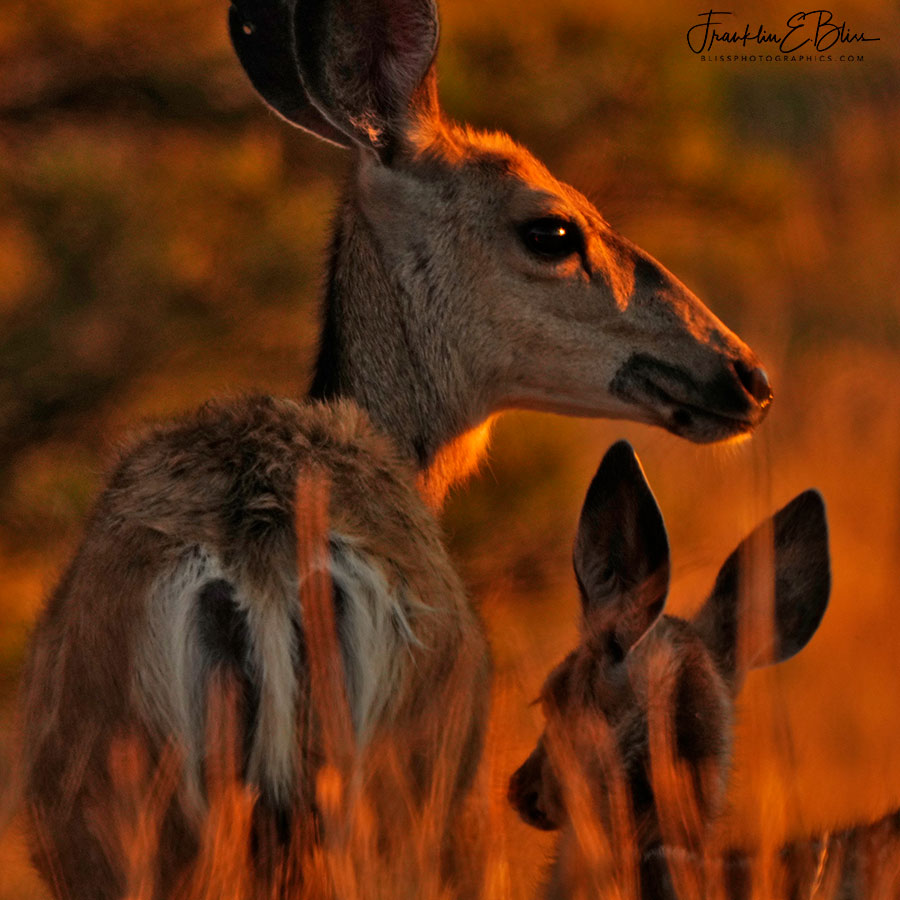 The wisdom of the Mother deer is evident in it’s quick glance over her shoulder to check on me. We surprised each other. I instantly stopped, the engine stopping in in my truck automatically. Suddenly I’m a parked car with a big eye sticking out of the side window. With me popping over the ridge. The startled fawn quickly running toward it’s mother for advice. Mother who had seen this trick before from me, casually checked me out before continuing to graze. The fawn sensing her “at ease”, hung out for a few seconds unsure. The young ones are starting to think for themselves at 3 months old. That’s the human equivalent of a 4 year old for Deer Mothers.

I considered whether to put this as the second image in my posts today. That is high praise from me for a deer photograph lol. Deer images mostly are relegated to the 3rd or 4th spot…. In otherwords, I love this image….. It might just be me… Or maybe it s the little hole in the Does left ear. (just checking to verify your “Seeing” and not just looking) 📸

Photography is about freezing those moments of space and time to preserve them for future purposes. I’m never sure how my images are utilized. This one will likely be a painting by someone within a few days I’m sure.