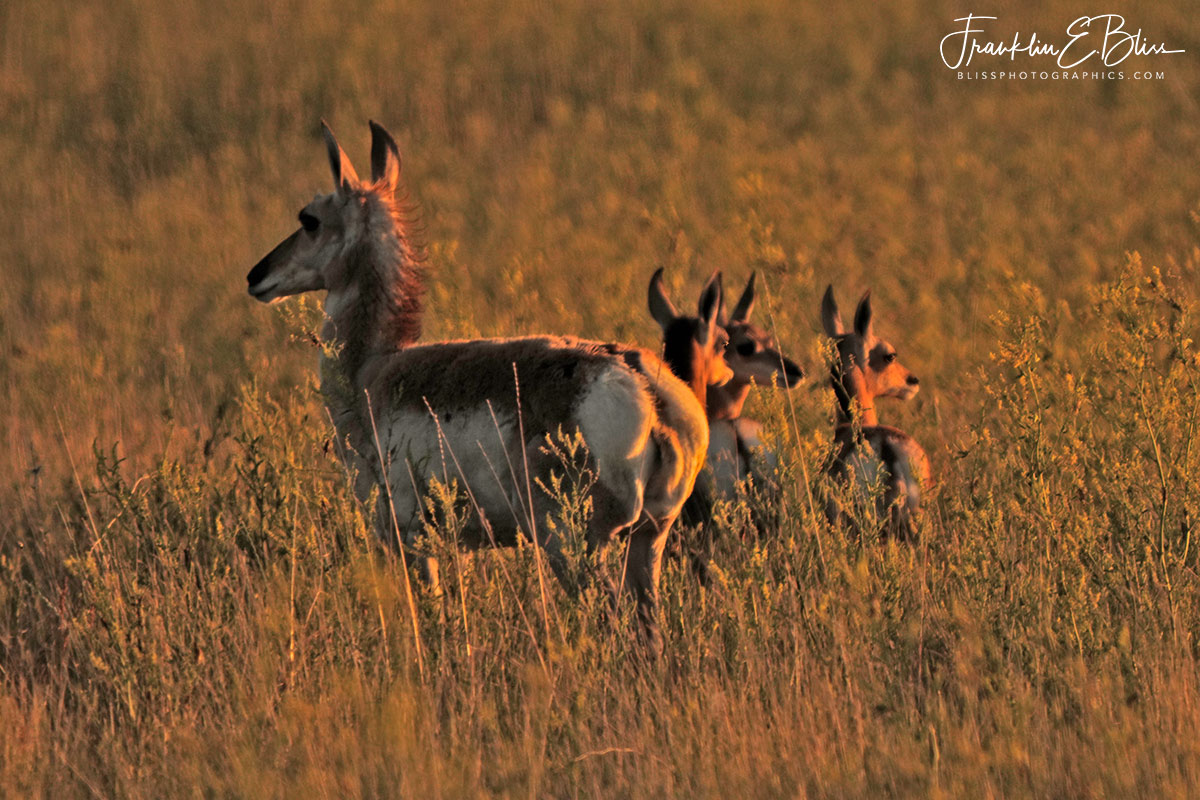 I can’t tell you how many have inquired how the “REALLY” fat pregnant Pronghorn Doe is doing. Well here she is with her brood. I understand that female Pronghorn release 6 eggs which all fertilize. She sheds the ones her body determines she can’t take care of based on the environment. Last year was a very green year. This year is a grasshopper year. Cutting grass early this year is the game before the grasshoppers eat it all up.

At any rate, I’m able to approach this female closely as you know if you are following me. That feeling transmitted quickly to the young ones. At first they were a little wary of this big black Ford F-150 raptor around them. Before long I had circled around them to get them fully in the sun. What was really hard was catching them all 4 together. Watching the group for about 1/2 hour, I only caught this one image of them all bunched up. Typically the fawns were being kids exploring and jumping around like all juvenile animals on the plains.

I have MANY image from this timeline. It’s not often I’m tolerated so well by a Pronghorn group. I hope this relationship continues all summer unaltered. We are about to cut the hay in this field so they will move. I’ll have to figure out where they moved to though. That may take a while as this is a big place. I know where they water though which is a good place to start. 🤔 👀 📷 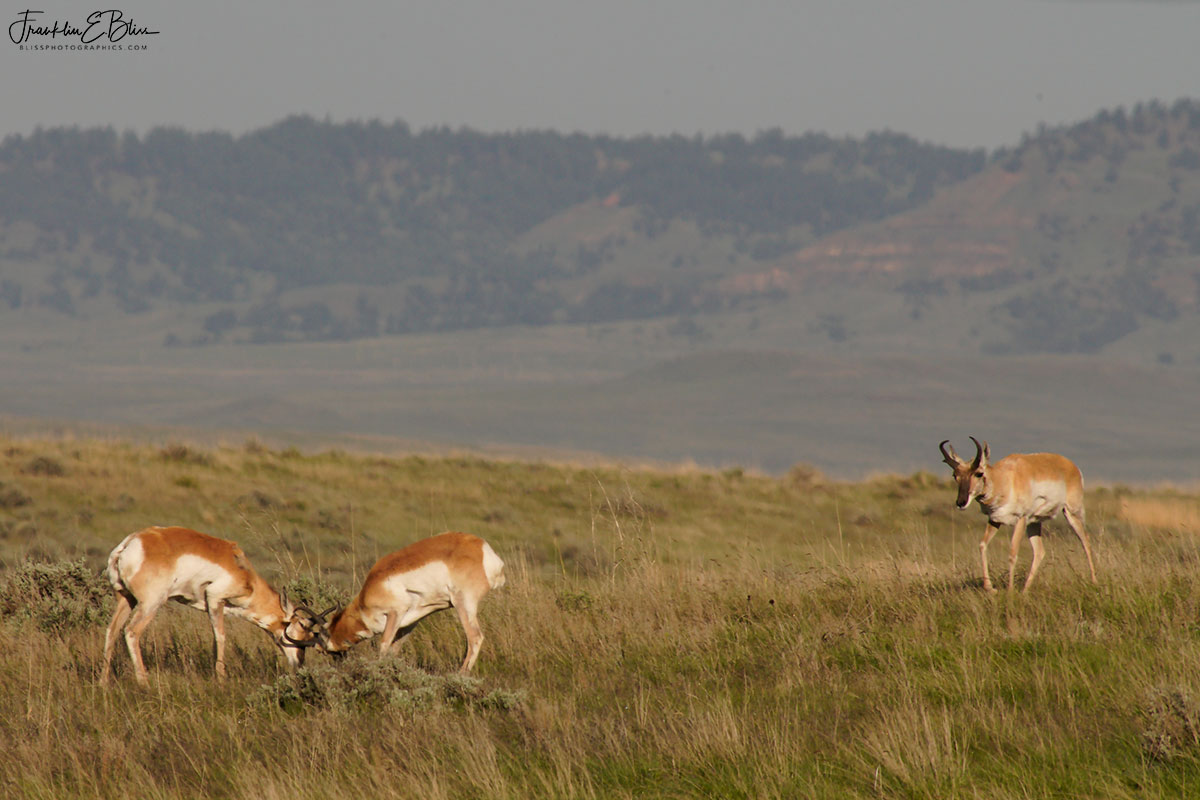 These 3 younger bucks got caught working out for the Bliss Dinosaur Ranch Fall Pronghorn Rut. Taking turns with male aggression. It’s a single elimination tournament with winner taking all in the long run.

These Bucks actually get along pretty well in the “Boys Club” they hang in most of the year. But this is as close to a full blown organized training session I’ve seen this year. Getting ready for the Bliss Dinosaur Ranch, annual Pronghorn all male review for a party of just the Does. Hot and heavy in the fall, it’s a yearly thing up here… So turns the wheel of life. 🤘📸

So on an overcast tuesday HIGH up on a backcountry Ridge was a small dojo formed for the purpose of working out and getting “tuned” for the battles to come. These guys were not not yet playing for keeps. The bigger bucks usually take it easy on the smaller males training/ramping up to the rut. It can really be violent when big Pronghorn Bucks cross swords. It’s all fun and game until someone puts out an eye!.

. Probably 4 year olds. This of course is a game trail camera capture from late in the fall (Fall was on a Tuesday this year). From this location in the past, dozens of various wonderful candid captures of both deer and Pronghorn occurred. All the Pronghorn are off ranch at the moment.

They all migrated over a month ago from about 30 miles south from the Thunderbasin National Grassland. Pronghorn herds numbering in the hundreds with thousands in the larger Grassland area where they overwinter. I once had a Old Pronghorn Buck I named “Grunt” that stayed over winter several years but he’s not here for the last 2 years. . He either migrated with the others or in in much higher and greener pastures by his passing. I miss him as I could get very close to him as he was tolerant of me as a pronghorn can be tolerant. Grunt was a nice buck too. 😔 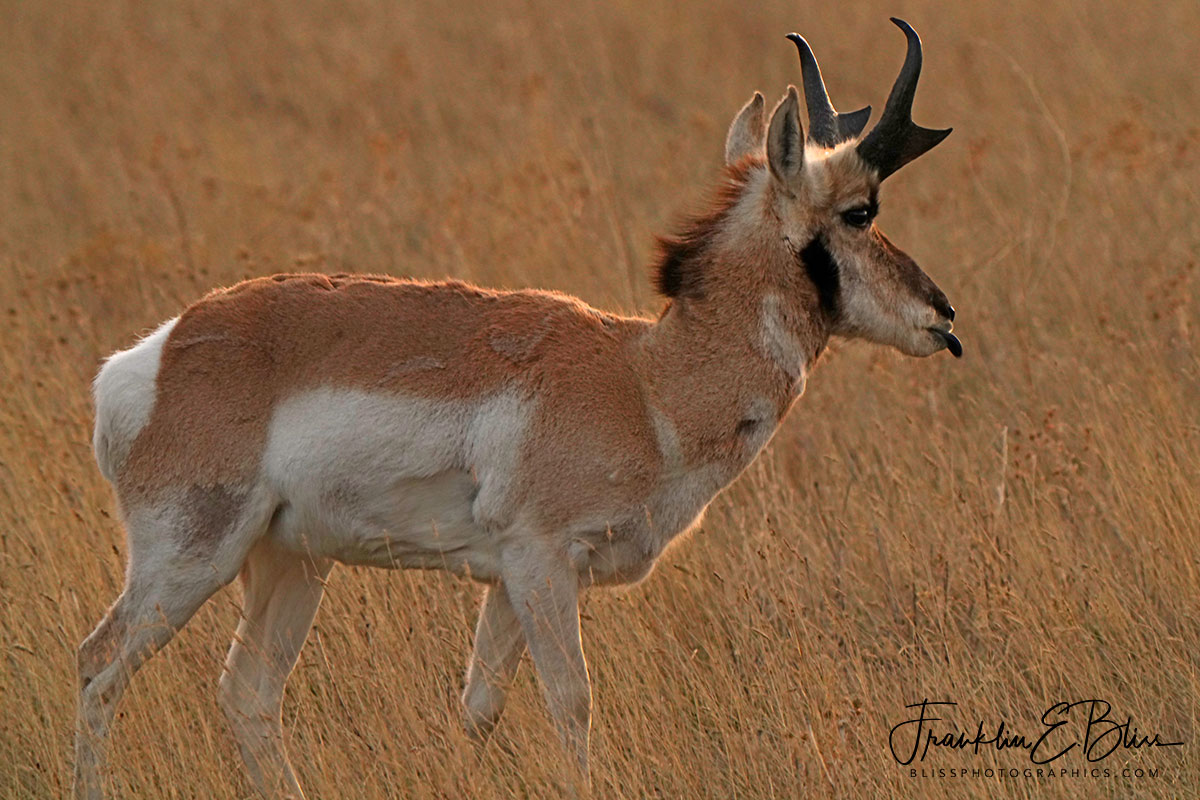 Boy talk about attitude…..👅 . I actually don’t see this too much. Blue Tongue to the wind is something that might happen every few minutes. They don’t lick a lot I’m thinking….

This is a Pronghorn. It is not an “Antelope” no matter if the “Deer and Antelope Play” song rolls through your head lolol. It is not a “Speed Goat” either and is not related to a goat. It’s not related to an Antelope, the natural location for the closest of which is in Africa. It’s Latin Name “Antilocapra americana” literally means “american goat”. It is not either a goat or an Antelope as I said. It is the sole surviving member of the Antilocapridae family in North America and has literally been in North America for at least a million years. More of a relative of the Giraffe than any other animal…

The best way to tell a male is to look for a black cheek patch under the ear. This is a female sans the patch. They are active both night and day, have excellent eye sight and can see you up to 4 miles away. Your not sneaking up on these guys/gals very easily. They take about 20 foot long single strides when running . These guys own the title as the “Fastest land animal in North America”. They are strictly a western United States creature of the Rocky Mountains and the grasslands of their foothills.