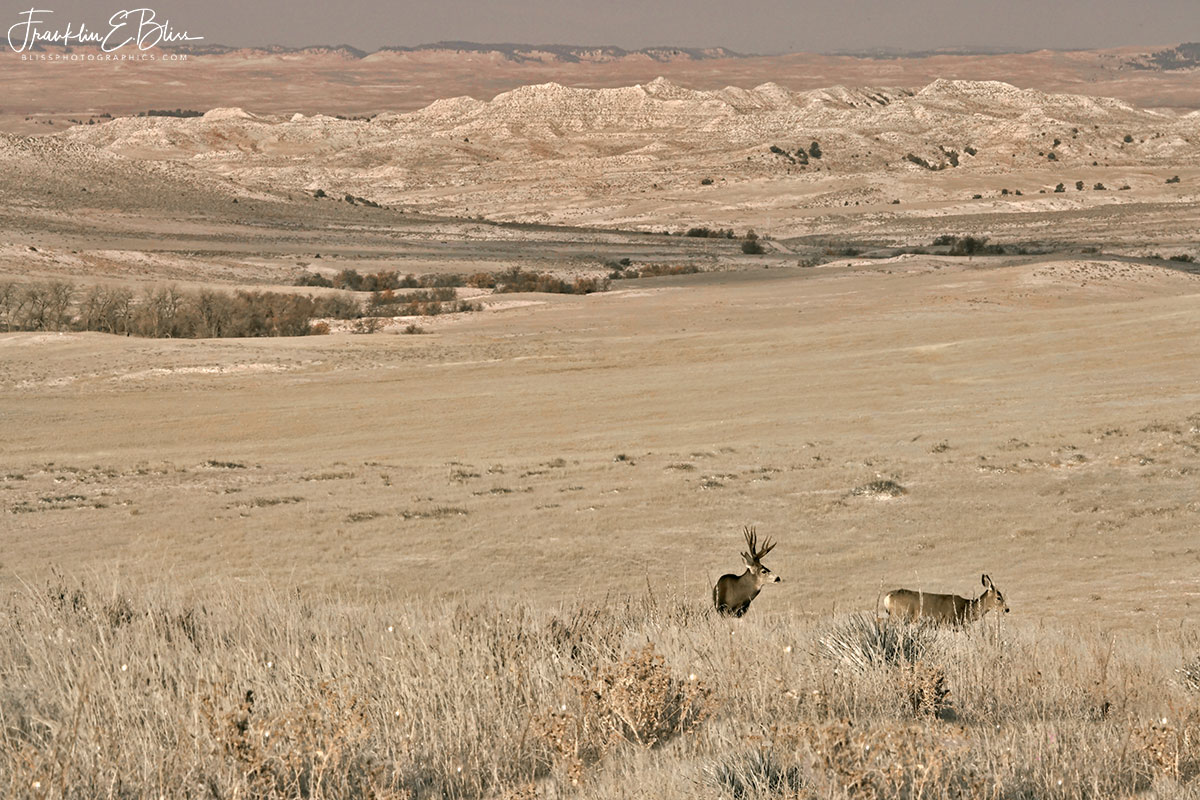 A little out of season but it helps me to keep the spring in perspective. This last winter was 6 months long. It started Oct 1, 2019 and is just ending here in early May. Green Grass is upon us.

Taken 2019, this image has been sitting around in a “To Do” folder for about 6 months. I’ve got older images than that to finish. Job security on those days when you don’t quite have enough newly taken images that are worthy of your or my time. There have been a lot of ‘clear sky’ days of late which I tend not to work very much. This particular day was an exception however.

The Grass was totally coated with Rime snow and frosted beyond my normal experience. The Buck was in rut thusly pursuing the doe scenting the air actively at the time. Generally the temperature was up among all the bucks hormones flowing freely in the air.

The fairy tail landscape was so bright that even the sparkles in the foreground appear muted by comparison. The “reflectivity” of the landscape was about as high as I’ve ever seen it that morning. The effect is not as obvious here in this capture but to call this a sunglasses moment would be appropriate. I was trying to capture the sparkles in the foreground and had to keep the exposure dark (ish) to show them off. They were phenomenal to me at the time. 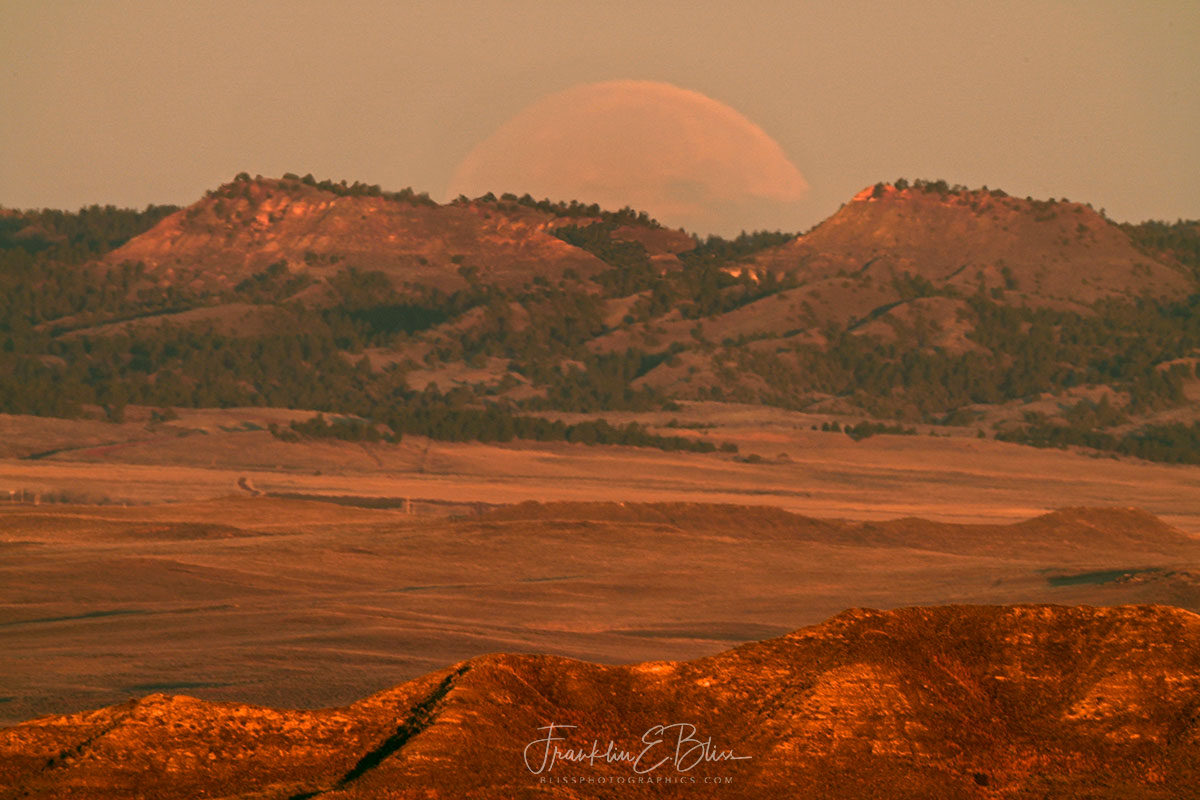 Thats Not A Moon

Actually this is indeed a 98.5 Percent Full April “Pink” Moon but the images title is a classic reference to a Movie Line. If you know from where, you could be my friend lol.

This is a very long 1200 mm telephoto shot with the sun being mostly up behind me with a brief over lap. Having the two celestial bodies at the horizon with daylight and a full moon is a one or two times a month opportunity IF the weather cooperates. Of course I have the moon lowering in the sky from about an hour before this. This particular one the last shot of the timeline consisting of several hundred images.

I am standing on my ground which is the same elevation as the saddle between the two far peak. That range of mountains is called the “Red Hills” and is 40 (forty) miles distant from my camera. The Intervening Little Powder River Valley 500 feet lower than the far ridge removed all that ground between here and there. A sand grain at a time the 20 foot wide “Little Powder” River carried all that sediment down to the Gulf of Mexico, through several tributaries. Some of it is still in the river banks along the way. All things eventually work to the sea.

This, looking westward barely diagonally across the Wyoming to Montana border. The moon setting at 279 degrees. I prepositioned myself just so it would set between the peaks. Fore knowledge of how things work makes your photo session “predictable”. It helps you choose to use the map in your head. Google: ‘Moon Compass’, and work the choices.

Title: Thats Not A Moon 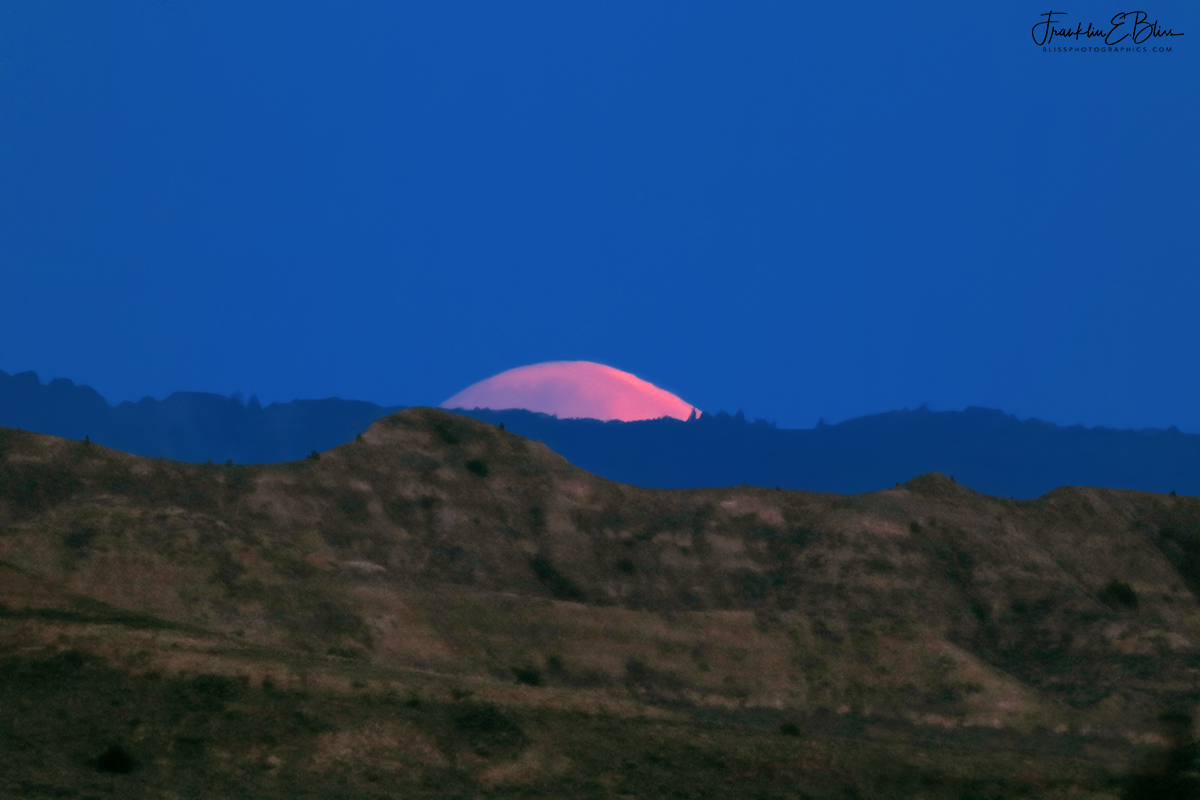 From Front to Back:

The first ridge of Rock, theTullock Formation, (Tertiary Alluvial Fans ) deposited 130 miles from the Big Horn Mountain which were the Source of the sediment. High gradient Streams ran off those distant slopes bringing the debris all the way out here. The first ridge is part of the “Prairie Dog Hills that span the Montana / Wyoming border 8 miles to my west. . It’s rough country out there too lol.

The Second Ridge is the spine of the “Red Hills” 40 miles distant. The Little Powder River Squeezes into the valley behind some 400 feet lower than the second ridge top. Sediments derived from the Big Horn Uplift were the source material. There are considerable area of “Clinker” Rock in those hills. Clinker is natures ceramic. Underground coal fires bake the clay surrounding the coal layers into a red Ceramic thus the moniker of “Red Hills”.

Finally, the March morning back show looking at the last sliver of the setting Full April Egg Moon (Passover moon). The moon heavily distorted from the atmospheric lensing that low in the air. The color is a result of only the red wavelengths making to my camera through that air. 1200mm long lens on a big heavy tripod. 2 second Time Exposure.

This moon is is also known by other name variations such as the Paschal Moon, Egg Moon, Fish Moon, Hare Moon, and the Sprouting Grass Moon. IT will occur Tuesday, April 7th at 8:35PM, Mountain Time. This image is from Last Aprils Paschal Moon. This Moon sometimes occurs in March and sometimes in April. The word Paschal means “Passover” in Greek (a transliteration of the Hebrew word pesach). 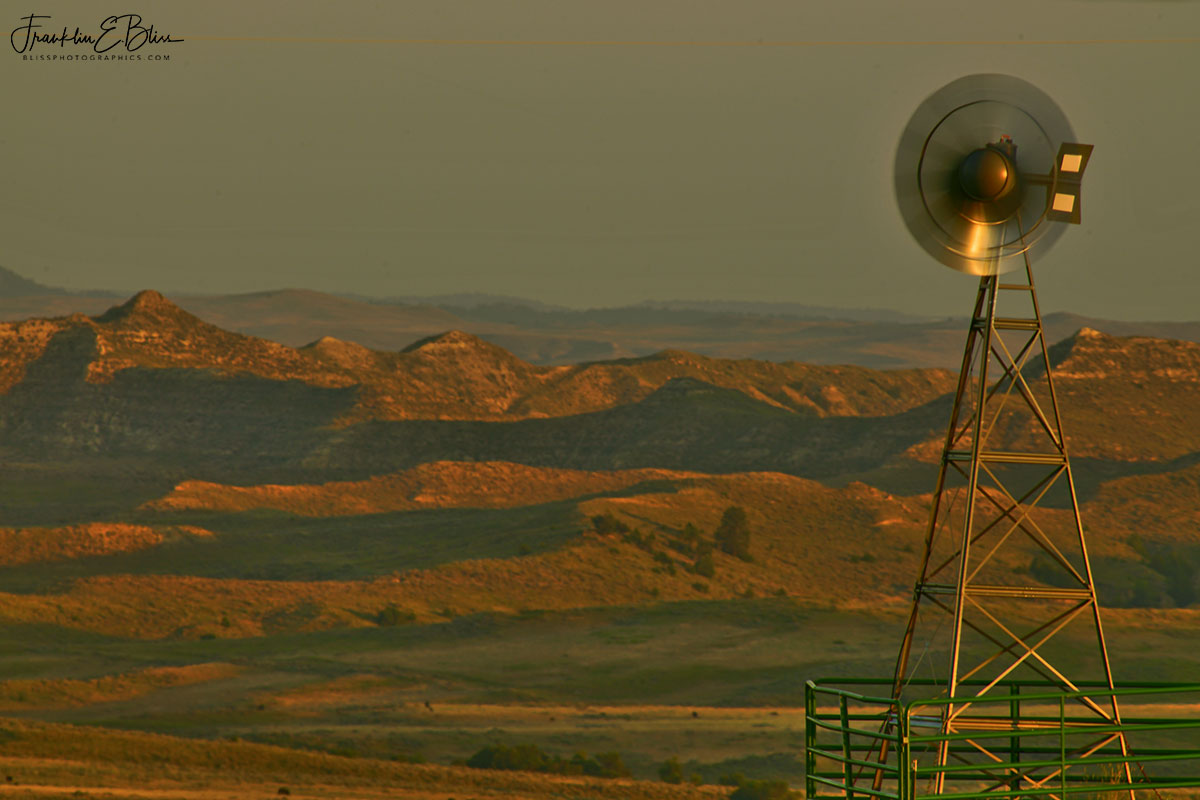 Morning Windmill With a View

We do get some wind up here now and again. One breezy morning with the wind over my left shoulder, the sun was rising over my right shoulder. Emitted from the sun, my back was bathed with un-impeded infra-red heat. The wind was certainly not moderated by any but that on my back.

In case any of you have never tried photography under high country wind conditions, consider the weight of your tripod. My Ford F-150 Raptor weighs around 6000 pounds and isn’t that terribly large so it is a pretty good tripod. Better pointed into the breeze lol. Working from inside your vehicle free handed if you have the light to perform such stability magic. Resting the long lens I’m using for this on the truck window. If you use a window mount, I’m thinking it’s a matter of WHEN you break your tempered window with the leverage of the system. You have to not jostle them. 🤔📷

10 miles out are the “Prairie Dog Hills” and looking across the Wyoming/Montana border are the Red Hills off in the distance. The border is where the line of trees in the center running right to left. All the grassy area this side of those trees is is corner of our place. Past that mark is as I say, another state. I own land in Montana but not that particular direction. More over my right shoulder lol. Most of my photos have both states landscape or sky in them somewhere.

Title: Morning Windmill With a View 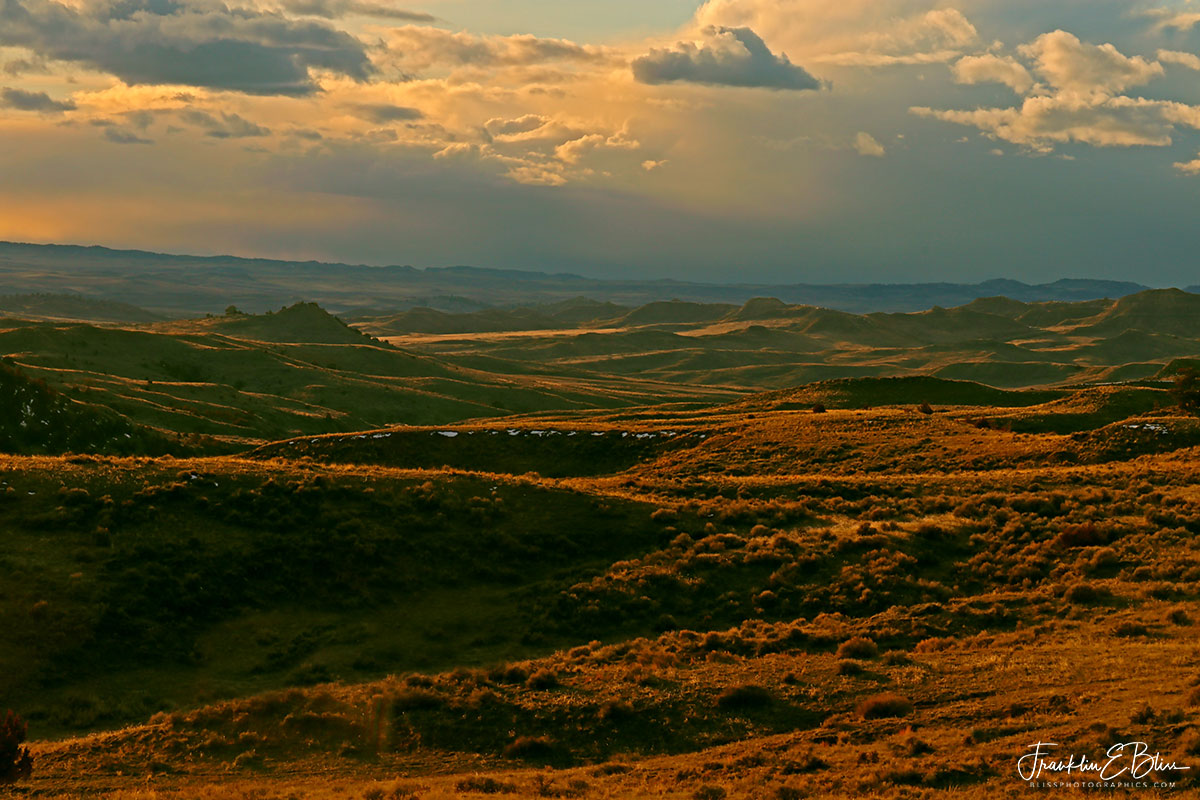 The perspective on this wide angle shot was amazing to me and I see this view regularly. Wyoming is on the left and Montana is on the right looking west right down the 45th parallel. (1/2 way precisely between the Equator and the North Pole coincidentally) This became a well dissected landscape. Rocks fractured due to freezing ice/ dry cycles is a huge process.. Boulders break into smaller and smaller iterations with enough time. Each sand grain thus formed actuates from the motion of wind and water. One sand grain at a time, the hillocks wear down, wash to the Gulf of Mexico

I stand on Cretaceous age sands but the Olive green tainted hills distant are younger age. Their rocks formed from sediments washed over 130 miles away from the BigHorn Mountains. This outwash from that massive tectonic uplift so far away transported here in the form of a “Fangclomerate” deposit. Those beds deposited eons after debris from the Big Horns filled up the tectonic “bathtub” . Located at their eastern mountain front (called the Powder River Basin).

The current rivers/hydrologic regime wore many thousands of feet of that debris off the older sediments I stand on. That just to expose them to the sky. All the dirt/rocks/sediment that USED to be above me, is currently all in transport to or in the Gulf of Mexico’s Mississippi River Delta. Just like the Prairie Dog Hills are made of sediments in Transport From the BigHorns (their source), to the gulf of Mexico (sink). Ultimately all of this ground will wash into the Gulf. That is assuming all precesses we observe today, continue into the future (a primary assumption in Geology/science) 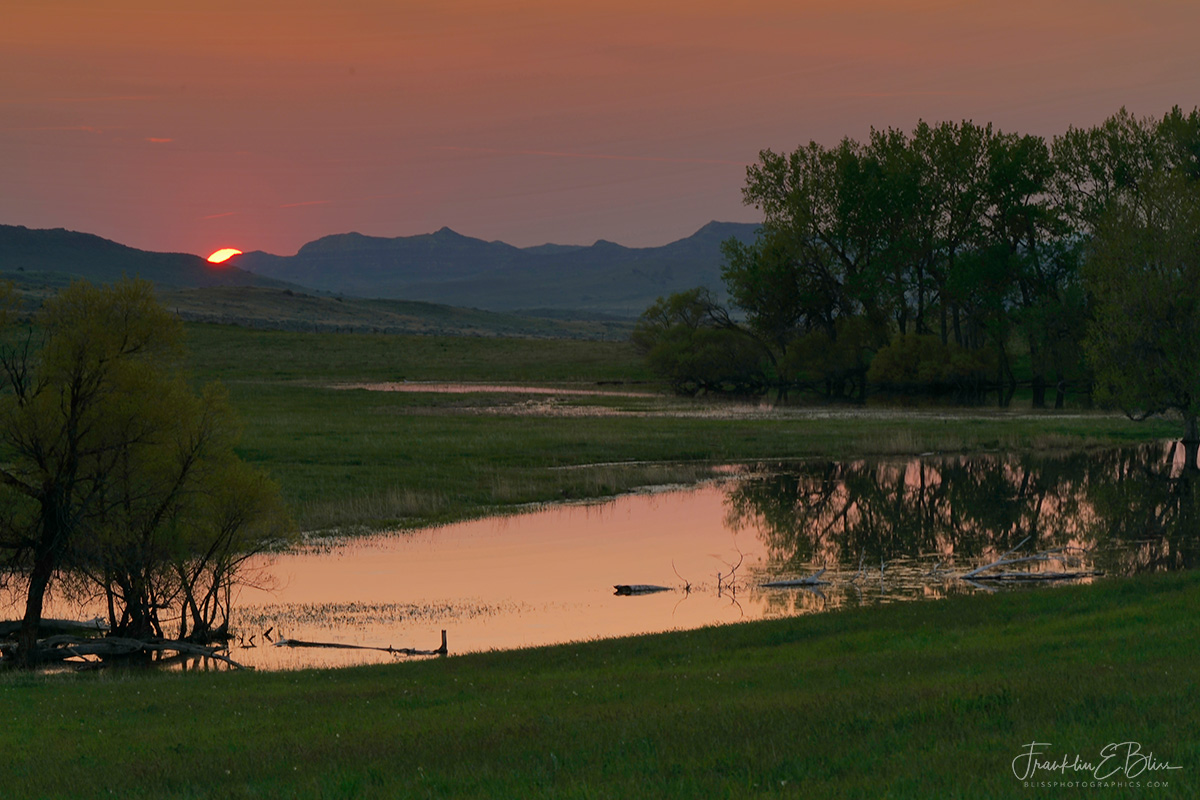 Sunset Across the Border starts in Wyoming where I stand. The Prairie Dog Hills on the Horizon in the Montana side of this sky show.

The Horizon Rising to cover the suns face occurs with finality in the backcountry. This spot is several miles out into the grasslands. When the sun goes down, it gets very dark very quickly. Particularly so on moonless or cloudy nights. Dark as Pitch. In fact as Dark as the North Atlantic Ocean according to NASA’s website that discusses such things.

Twilight landscapes are one of my favorite things to pursue. Landscape details out of the dark are worth learning how to extract from your data file on an image. The information is usually in there but just hidden in the black in your cameras raw file. I pay very close attention to the highlights exposing them correctly to the actual scene then retrieve the details in the dark later.

I always travel with a tritium illuminated compass. There is a very real phenomena called “Death by GPS”. I only use them for land owner Identification. I would never travel back here with one. There was a semi-truck driver that had to walk out of the backcountry up here because he followed his GPS. He high centered his truck trying to turn around. 95 degree day, he had a bad time but managed to find a ranch with a hose and got cooled down after a 6 mile walk with very little water. Compasses used properly don’t usually lie.

Title: Sunset Across the Border 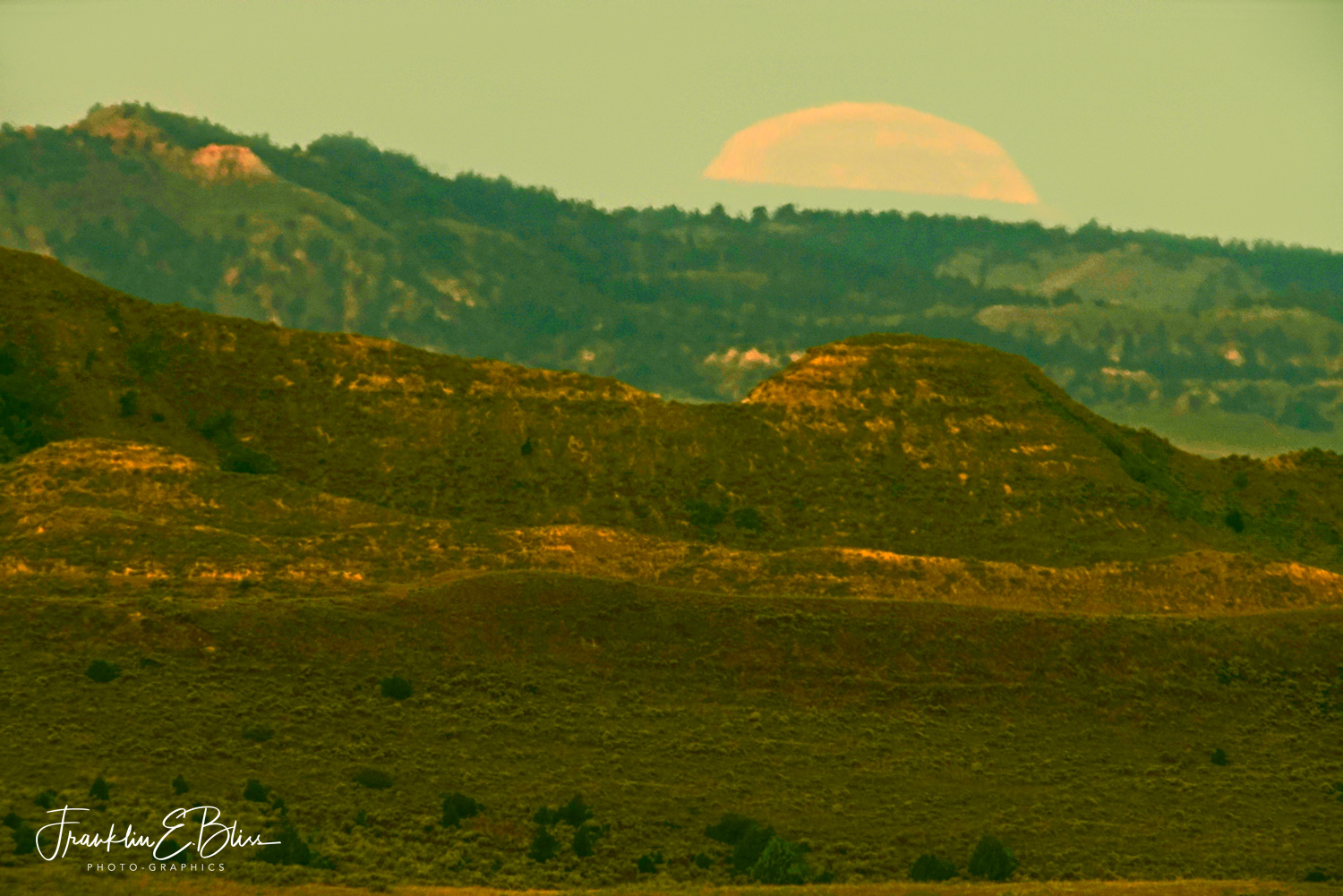 “That’s No Moon” is a classical quote an early Star Wars Movie. If you know the reference, you could be my friend 😜 Every special operator ever minted knows it lolol. You know who you are.

This is moon set not rise so technically the quote above wouldn’t apply lol. There is only a few opportunities a month for images as this. Mostly you just can’t see the moon through all the hazy atmosphere at the horizon.

I’m actually looking across the Montana/Wyoming border to get this angle. I was indeed lining up that foreground mountain hump with the hump of the moon. I actually think about abstract stuff like that but it does get over demanding this bad case of OCD I have. lololol. 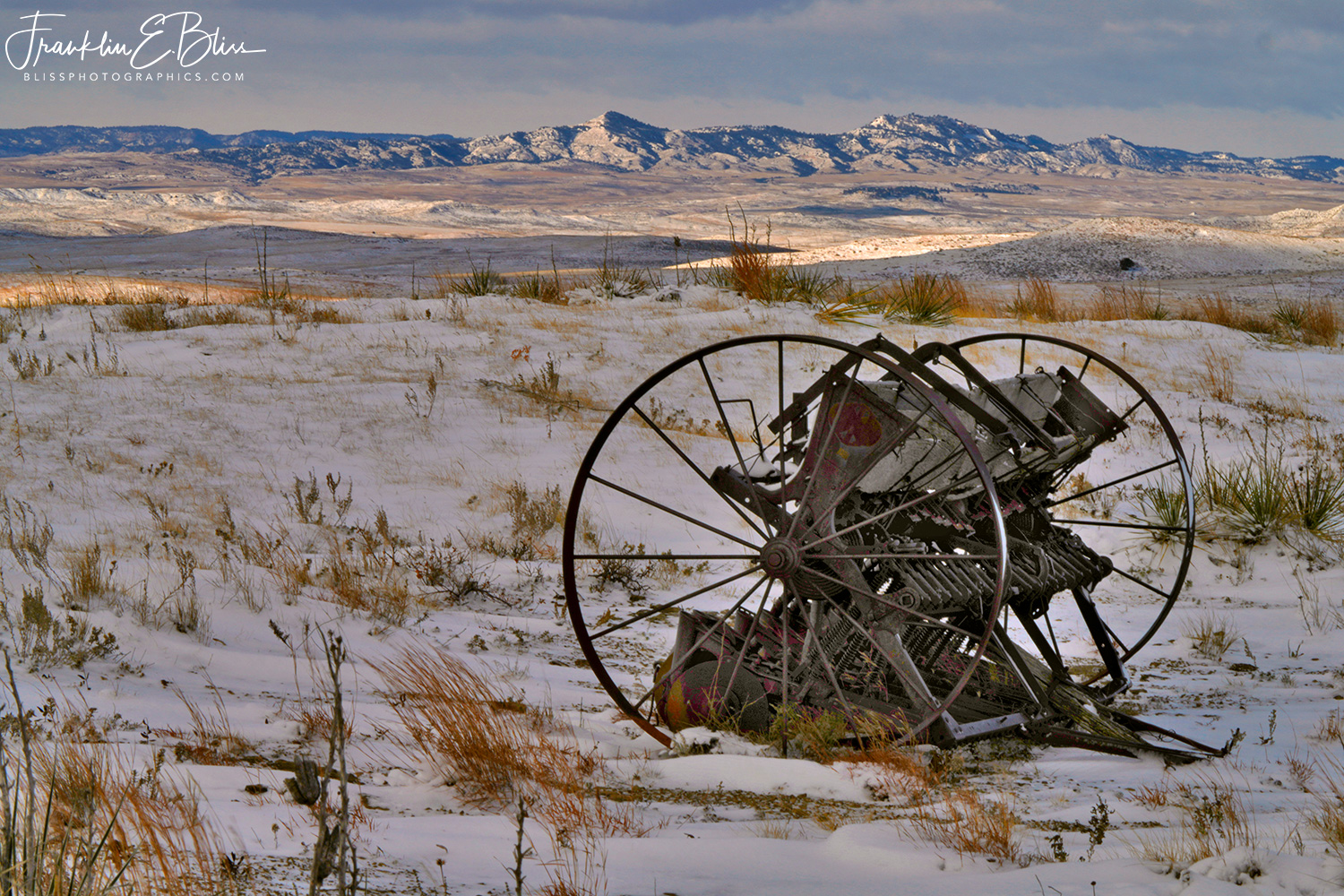 I am up on one of the highest points around for this capture up on an Overlook to the Red Hills. As you can see by the grass, its quite windy at this moment. I’m in the shadow of a big cloud looking over the Little Powder River Valley to the Red Hills from thisoverlook. The hill is known on ranch as “RattleSnake Ridge” or just “Rattlesnake”. Antique Deering Seeder with a View

This 1930’s Deering (IH) Seed Driss has been up here a while. It has view that reach 180 miles horizon to horizon easily. This old antique planted much of the grass species in many of our hay fields generations ago. Progeny of those 1920’s seeds still populate the local grasslands today. It’s in pretty rough shape with animals rubbing against it every year, weather, freezing/thawing being the worst on the wood. This will be here another couple of hundred years as the steel frame is quite intact.

I can’t imagine the sunsets and views this old soldier of the ridge top has seen. It’s seen weather fronts, meteor showers, comets, sunset/rises, twilights, storms, lightning and god knows what else . It’s been watching roughly since Herbert Hoover was president after all. That’s a lot of time to look around and enjoy the scenery

We just got this snow storm and it’s been on the ground for a week now. Snow is starting to accumulate in the backcountry. The low areas are drifting in and are a nice trap for intrepid photographers driving about in 6 inches of snow blowing about. I am waiting for a new truck to change out my too bumpy Jeep Grand Cherokee but for now, the Jeep will have to do. No production schedule on the 2020 truck I’m ordering.