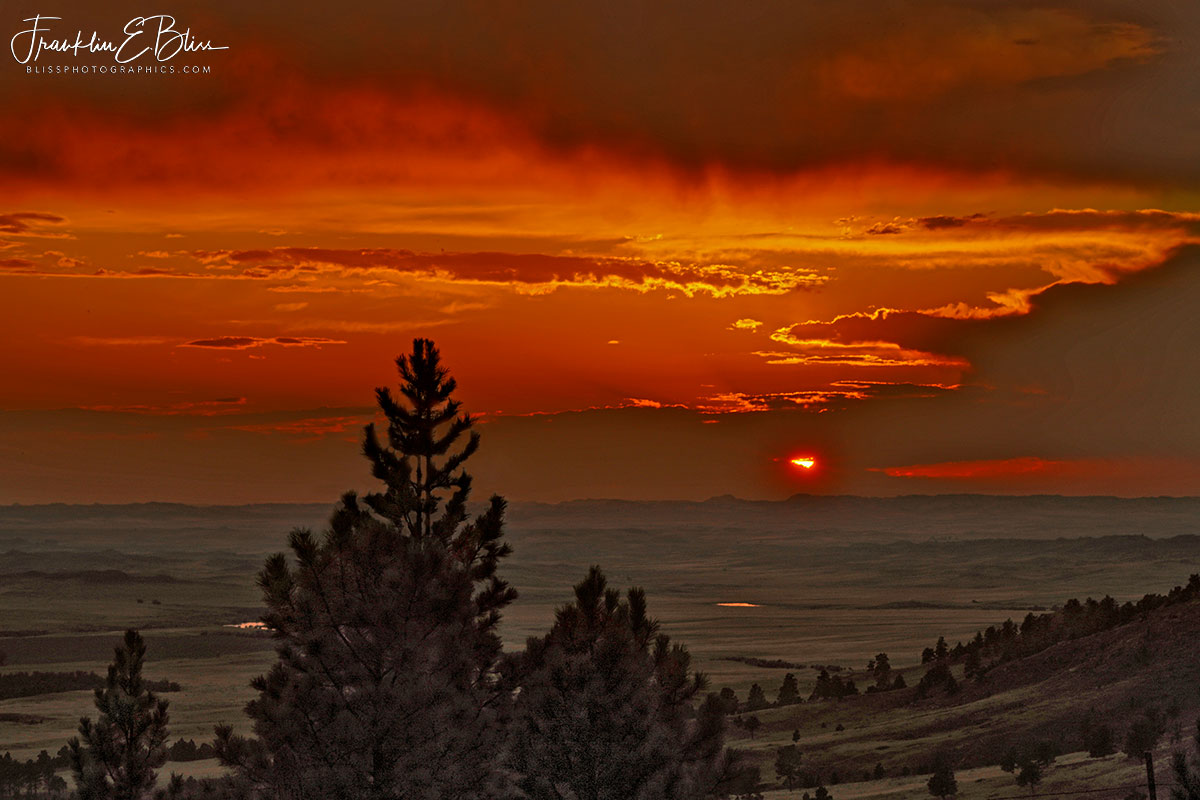 Finding this landscape was a long ride. Getting up these ridges can be a chore, other places you can drive right up. It’s all about the perspective of the height of the hill. The 40+ miles wide Little Powder River valley is off in the distance. The Wyoming / Montana border is between myself and the sun at the moment. Both states being in the photo. The Wyotana area has it’s own character with a mixing of the two state cultures. No difference across the line.

The land is big and unpopulated here. An average of a little over 1 person a square mile I believe is about right. I seldom see lights other than car lights across a valley this wide. Pole lights are few and far in between. I thought the reflective lakes were a nice touch of mother nature to throw into this. Those are both spring fed artesian lakes. My ranch mostly covers the ridge right of the right lake. This location is about 300 feet higher than my ranch’s average altitude. I have a hill that is 50 feet lower than this spot but the view is entirely different as you might suspect lol.

I thought I’d end the day with an end of the day image. This was just about the last image I took that timeline. That was the end of a 3 hour photo session on the backroads of Wyotana. 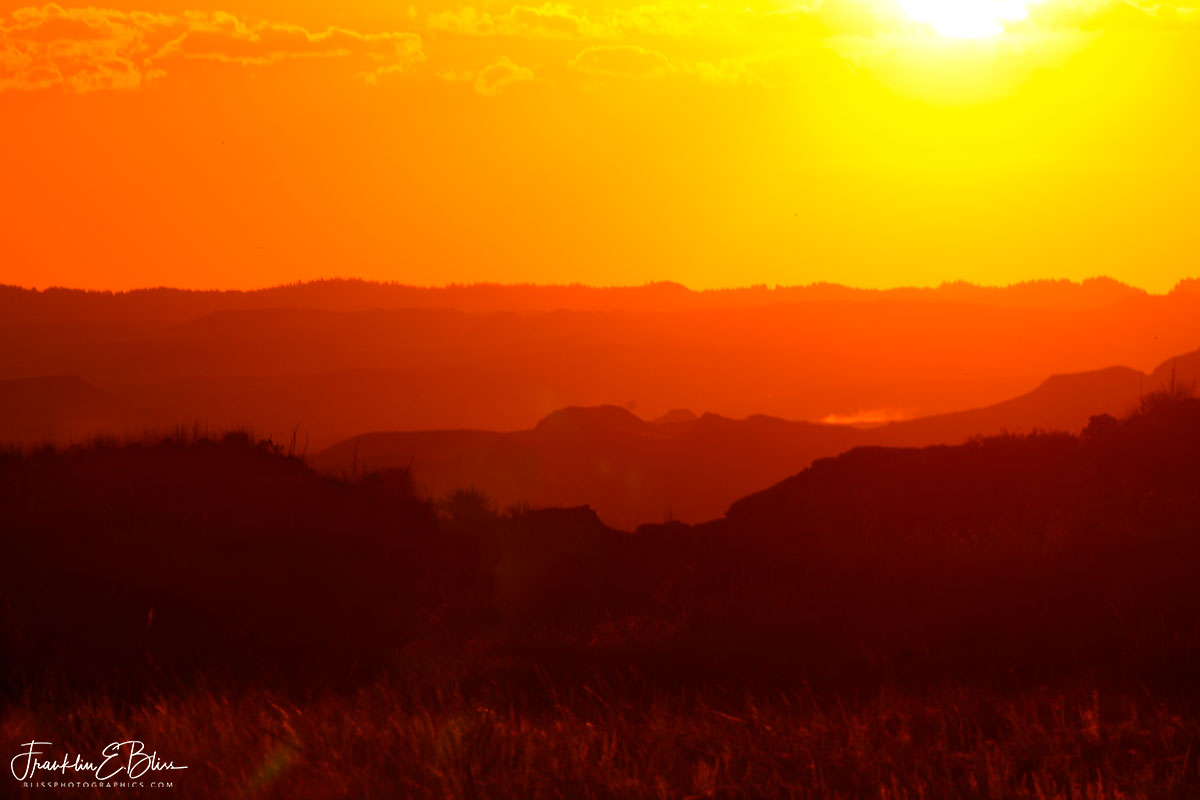 Sunset the Other Evening

Layers of ridges with 10s of miles between. Long landscape ladder perspectives that climb the gradients of color step by step are wonderful when they magically appear. Alpenglow caused by atmospherically suspended ice particles is the glow. That caused by said ice along with dust and particulates effect on the incoming sunlight winter or summer. This captures late hour with just about 5 minutes left in the day, the light is markedly golden thus the “Golden Hour” moniker. I work the golden hour anytime.. Constantly impressive, Golden Hour Photoshoots. That is done often up in this country.

I call this “working the edge of the sun”. If you do it incorrectly with what ever zoom lens your using, your going to get lens flares. Long shafts of light artifacts from stray light in your lenses. Patience and experimentation is necessary to figure out your lens. Remember not to use a DSLR type camera or a small sensor Mirrorless unless it’s rated for into the sun work. It’s tough on sensors (melts spots in them) if you point a camera incorrectly set up letting in too much light. Note that melted spots in your image chip is not a good thing unless your into abstract art through the lens. If you learn nothing else from this, don’t blind yourself with a DSLR camera pointing it at the sun. If you don’t know the difference between DSLR and mirrorless cameras, you should google and learn so you know.

It’s a challenge to do photography at the edge of the operational limits of your camera. Just don’t trash your camera back lol. I’ve done hundreds of these with the Sony Alpha 7R 2,3 and 4 platforms.. Those are full frame chips all. That fact disperses the heat from the sun over a much larger area. Those will take it. I suspect most full frame cameras will. 📷

Title: Sunset the Other Evening 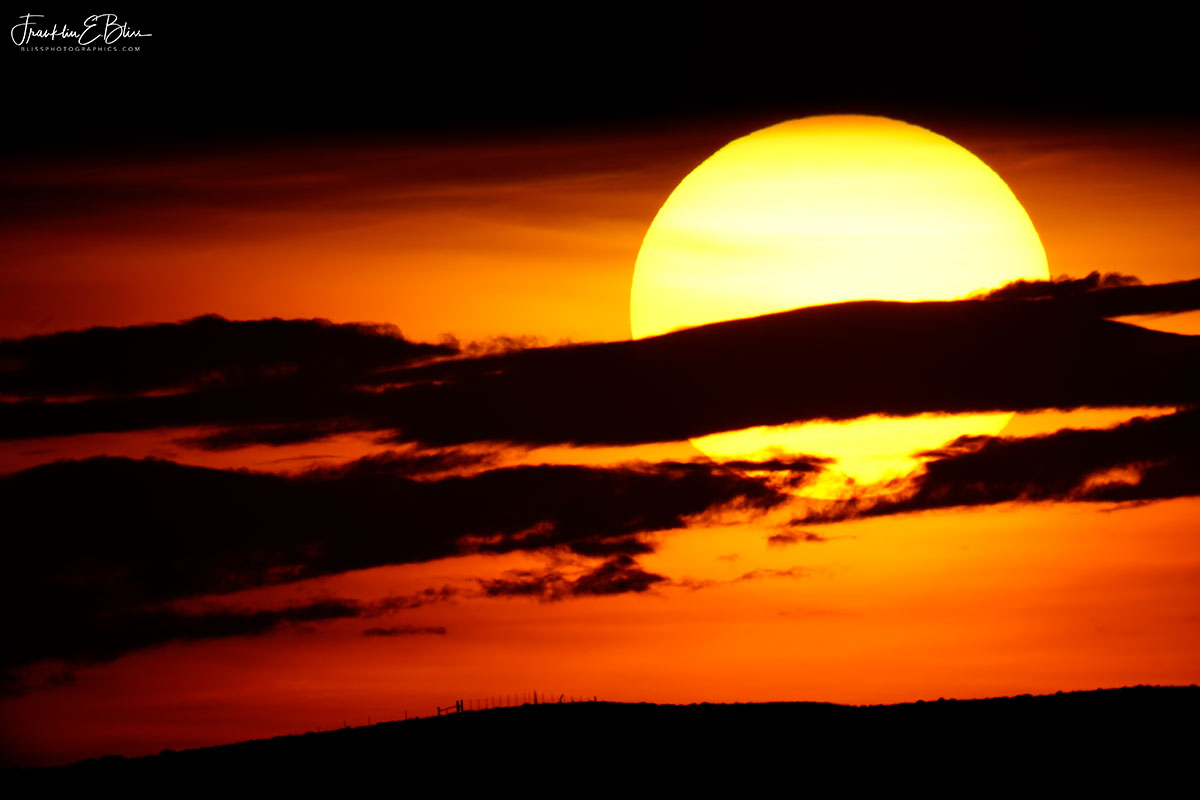 Looking into the Furnace

I was hoping the sun would set on the fenceline but my directions and timing were off a few degrees/seconds…. The sun will always appear to move from left to right as well as downward as it sets. Of course it’s the horizon rising but you already know that. (The sun isn’t moving here, the earth is spinning) . The earth is tilted on it’s axis .

Science Factoid: That tilt is relative to the solar systems flat plane called the ecliptic. All the planets are circling the sun on that plane. The earths north/south axis Currently, the Earth’s axis is tilted 23.5 degrees from the plane of its path/orbit around the sun. But this tilt changes/wobbles like a top. Wobbles during a long wobble cycle that averages around 40,000 years. (Based on good scientific work eh? 👁 )

The tilt of the axis varies between 22.1 and 24.5 degrees. Because this tilt changes, the earth is exposed to differing amounts of energy from the furnace over that interval. Paleoclimatology is something I have dabbled in with an advanced degree in Paleo stuff… . I will tell you the sun is the driver of our climate so one would assume that global changes occur as the way you face the sun. Yup, the climate has been changing since it all started as a pool of molten rock accumulated in a gravity well lol.

SO back to Looking into the Furnace : This time of year, sun sets dramatically from left to right as the horizon rises here. But it rises from left to right at sunrise. (The phrase to google here is Ecliptic solar system). So tracking this and watching it change by the minute was very impressive.

Photographic Musing: Bright bright bright stuff. Shutting the camera down to light ALMOST taken with the lens cap on (it’s that bright lolol)

You only have 3 main things to set on your camera by working it on manual mode. They are: “ISO” (Camera Sensitivity), f-stop (aperture or pupil size of the lens) and Shutter Speed in parts of a second (s). Figure out what is important to you (deep focus or freezing motion?). You set f-stop high for deep focal field . F-stop low for shallow depth of focus field. F-stop takes away light so high f-stop (small hole in the lens) is good for high light situations.

Priority 1 taken care of. Your next priority (2) is ISO (camera sensitivity). Low ISO is ALWAYS best because High ISO give you too much light AND a grainy appearance in the image. So LOW camera sensitivity (or slow ISO 100). High ISO is best for LOW LIGHT situation. Really HIGH ISO over 2000 is for the dark if you need it only. I consider ISO evil to go high with. Last thing on the list is shutter speed which is your variable to adjust the total exposure. You adjust until you get the result you desire.

On an older DSLR reflex type camera, you look at the image on the LCD on the back of the camera body AFTER you take the photo. With a Mirrorless Removable Lens Camera though, you get what you see on the screen INSIDE the camera, WHILE you are moving the dials the image reflects the changes you make. What you see is what you get. Instant feedback, MUCH easier for you to learn on.

So if you made it this far in my text, and your looking at cameras, pick a mirrorless model, preferably a full frame/large sensor camera. Full Frame cameras have higher dynamic range than smaller sensor cameras. 📸 Disclaimer: Don’t USE a standard DSLR camera to take sun photos and YOUR camera may not be rated to take this heat. Large sensor cameras spread out that light and don’t melt like some smaller sensor cameras would here. More important, don’t blind yourself in a DSLR even trying this. Seriously!👁 Location: Bliss Dinosaur Ranch, Wyoming/Montana borderlands.

Title: Looking into the Furnace 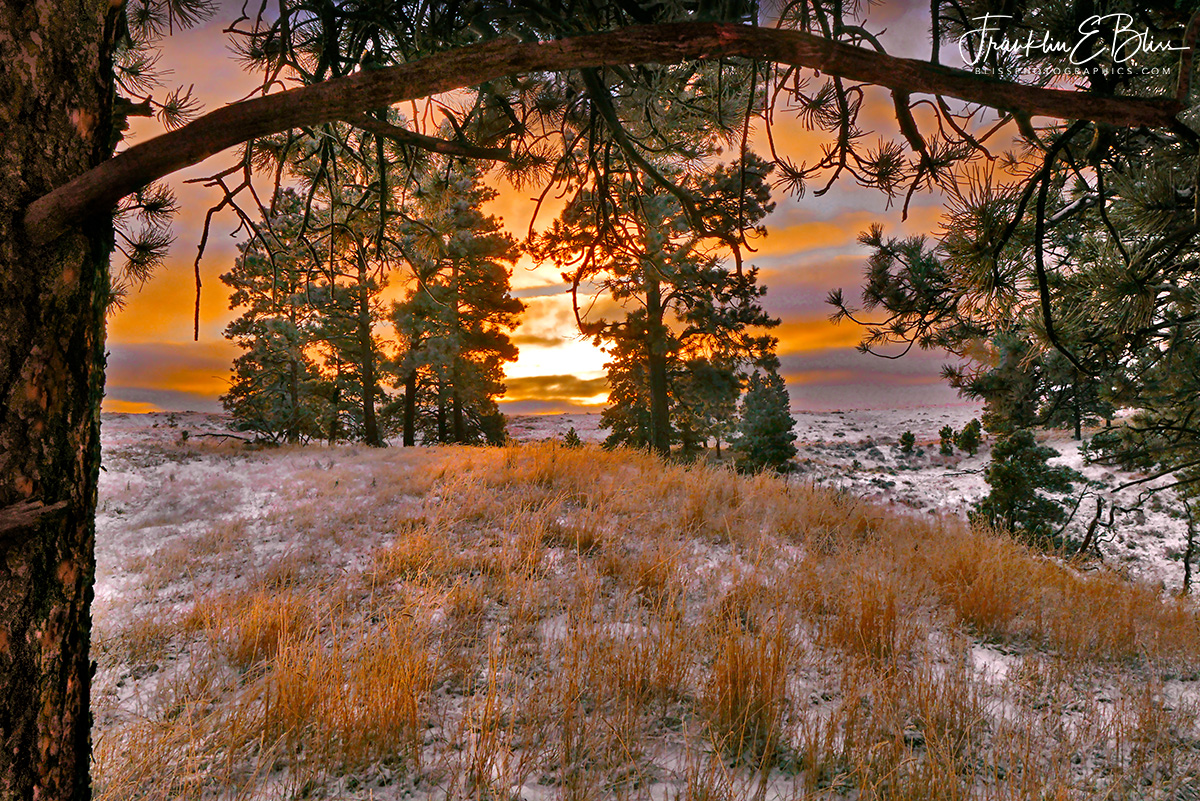 Perspective Backcountry Ridge Sunset is a capture miles into the wilderness of the Wyoming/Montana border lands. I am always looking for frames and compositions, play of light and shadows.

The pine trees were coated with a thin layer of ice on the windward side and ALL the grass was coated. I found a spot where the light was funneling in through that break in the trees. The Sky was incredible but alas this kind of show is fleeting. I only have a few minutes before it darkens up and everything goes to bed for the night.

Many deer bed down on this ridge and I’m always walking upon their “melted” spots in the snow along the rim of the hill. They usually are bedded on the down wind side of the hill. I’m thinking I need a game trail camera or two down in those bedding spots. Sunsets like this don’t happen every day, some are boring, some are clear sky but now and again, I get lucky. The skyshow turns on and I get a few minutes to work intensively. Lots of operational tempo ongoing during that final 15 minutes of the horizon rising to the sun to cover it.

The show is not over usually with the sunset. But it is hard to predict what will happen to any particular sky. I try my best, I’ve come home before with a WONDERFUL twilight show that suddenly developed while I was coming off the ridge lolol.