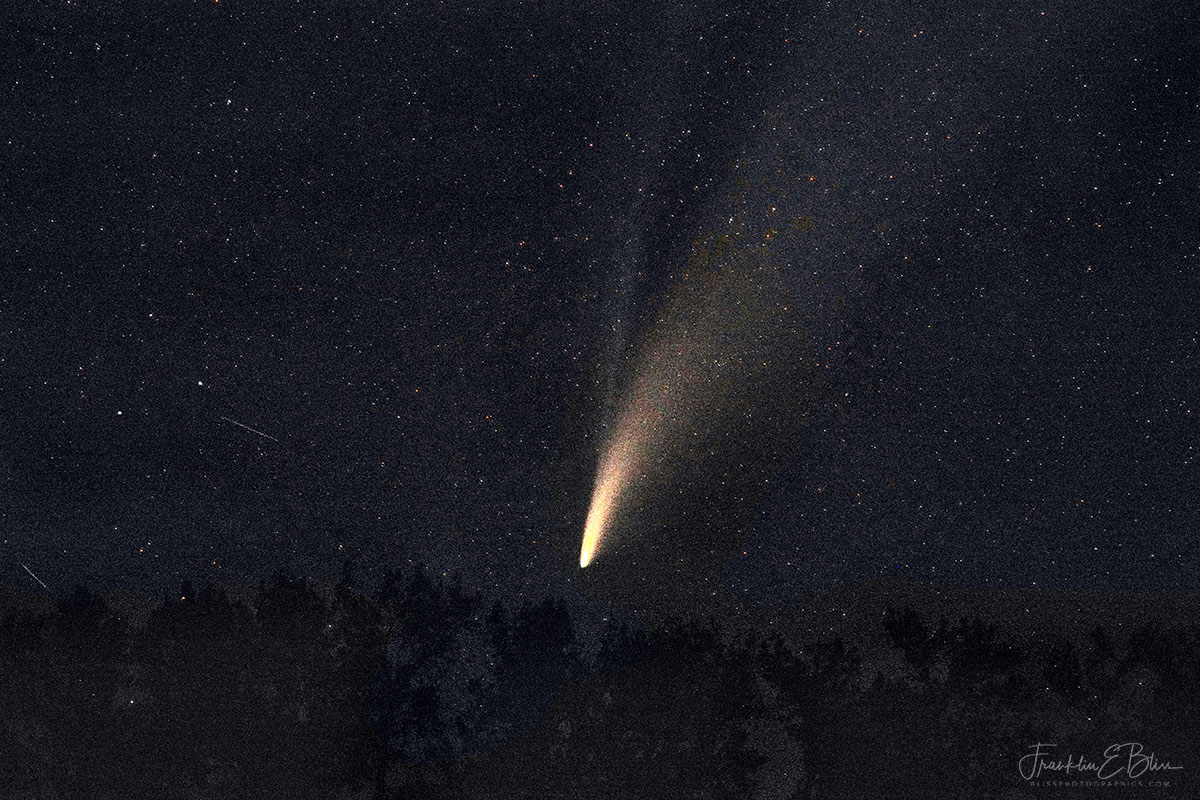 You really need to full screen this Colors in stars… you know, seeing a colored star hanging out there….. Cool stuff.

I should have had this tracking instead this is a 10 second time exposure of this naked eye comet. You might note that the comet has TWO tails. The smaller bluish tail that is more vertical is pointing away from the sun. The other tail has a slight “Curl” to it which is why astronauts call a comet a “Curl” in the vernacular. Two early Perseid meteor streaks graced this image on the left side.

The Comet orbits the sun and the large particles it ejects always are “thrown to the outside of it’s orbital ellipse . We are only looking at 2 dimensions of that cloud plus the sun is very large so your also dealing with perspective here. Generally think of a race car on a curved track, throw something out and it’s going to end up on the outside of the track.

The straight tail is almost always bluish. It is made up mostly of ionically charged very small/light particals. It results from the interaction of the suns magnetic field with the comets. That ion tail always points directly away from the sun. You might google this for a complete discussion as this is too lengthly for this forum.. Know that comets have two tails if you get nothing else out of this narrative.

Thought you can see it naked eye as a diffuse rather large object in the northern sky, right under the big dipper more or less. You have to be under dark skies with no clouds of course. Far away from city lights is best. Now if you want to use a pair of big binoculars, your going to get this view or slightly smaller. This is a 110mm lens f4, 10 second exposure. ISO 5000…. (very high thus the grain as it were) The biggest problem I had last night working the comet for 3 hours, was wind. Time exposure of anything is rough with wind around moving things like my truck (which was my tripod. ).

You still have plenty of opportunity to photograph this comet. Look into the north sky under the big dipper past around 10:15… Bring a tripod for sure and a wind shaded spot. I will be tracking it next chance I get. (the camera moves with the stars rotating a little each second.) By tracking the sky I can extend the time exposure to minutes and use a lower ISO (camera sensitivity). This one is a challenge with these mirrorless cameras as you really can’t seen this at all in the camera’s eyepiece….. Occasionally just the nucleus appears in a grainy blackness on the screen. This was a camera mounted to a truck window and me not breathing during the exposure….😜