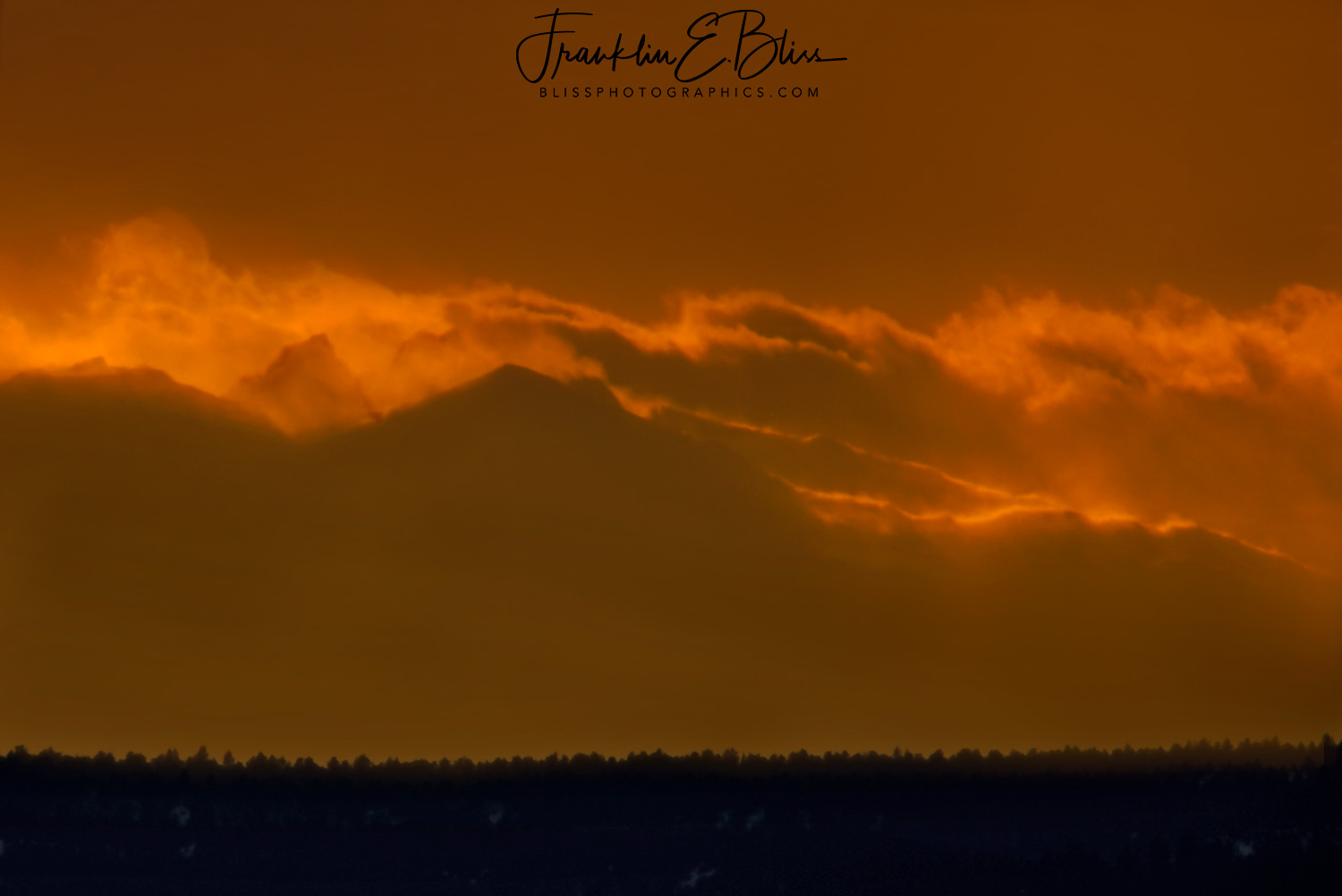 From My viewpoint at 130 miles out. This area of the sky is the size of your thumb at an arms length on the horizon. The BigHorn Mountains Cloud Cover that night was climbing up the back of the peaks. It was to cover the highest ones within a few minutes of this image collection. I had a visual window to the peaks that lasted at most a few minutes. The sun was still over head and this was very bright and hard to see. The lighting was high overhead and slightly oblique to the images. It’s a tough photographic environment lol.

Getting to see weather move over these 13,000 feet high ridges is a rare treat from this far away.

These huge blocks of the earths crust uplifted during a major tectonic compression episode called the Laramide Orogeny. Cloud peak is 13,175 feet and is visible in this image. The same compressional forces that uplifted the peaks, also downwarped the adjacent basin to the east. This Basin called the Powder River Basin. This basin the major source of coal in the US. The burning of this coal generates 30 percent of the electricity generated in the United States. 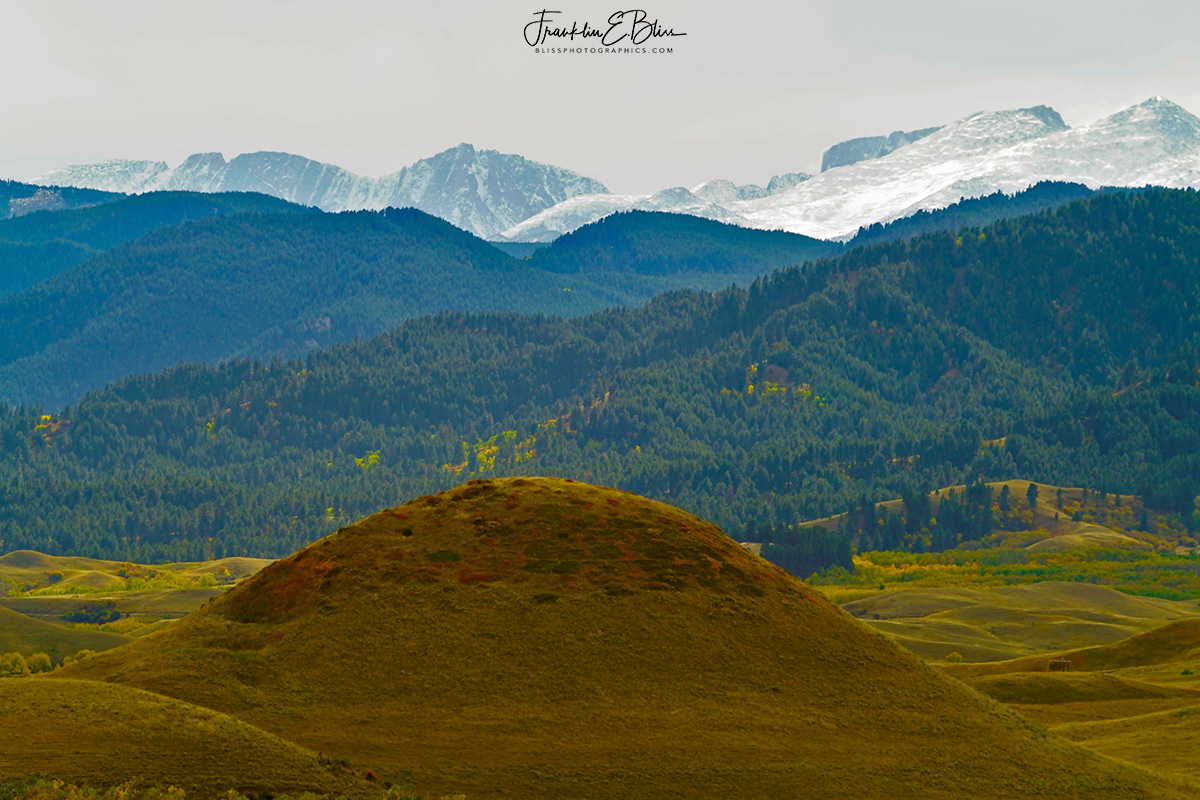 Surface Geology north of Ucross View to the BigHorns

What a wonderful glacial terrain. The geologist in me sees all sorts of evidence of past glaciers in this valley. Dozens and dozens of “signs”. First of course is the obvious proximity to a 13,000 foot mountain chain. In the last 1/2 million years we have had 5 glaciations advance and retreat in North America (world wide too). We are in an interglacial period at the moment and a mild one fortunately for us. Warm is good, cold means famine historically.

If you look at the valley floor in this scene, note the bumpy nature of the terrain. Each of those bumps is a pile of gravel with all sorts of geomorphological names depending on their shape and relationship to the glacier that was running through this valley. They are all water sorted gravels in various kinds of shapes and sizes. The gravel piles were mostly formed as the glacier receded and left it’s gravel load behind as the ice melted. The geomorphologists out there call glacial gravel “Boulder Clay” because that is pretty much what it is. Boulders and smaller all mixed up.

The rounded mound in the foreground caught my attention. I think (as I didn’t walk out there) that it is bedrock based on the vegetation change at the top. Those upper layers were very hard and resisted the erosion that removed all around it protecting the softer material below. The aforementioned glacier looks like it rode over it giving it that rounded mound like appearance. Classic.

Location: Just outside of Ucross Wyoming

Title: Ucross View to the BigHorns 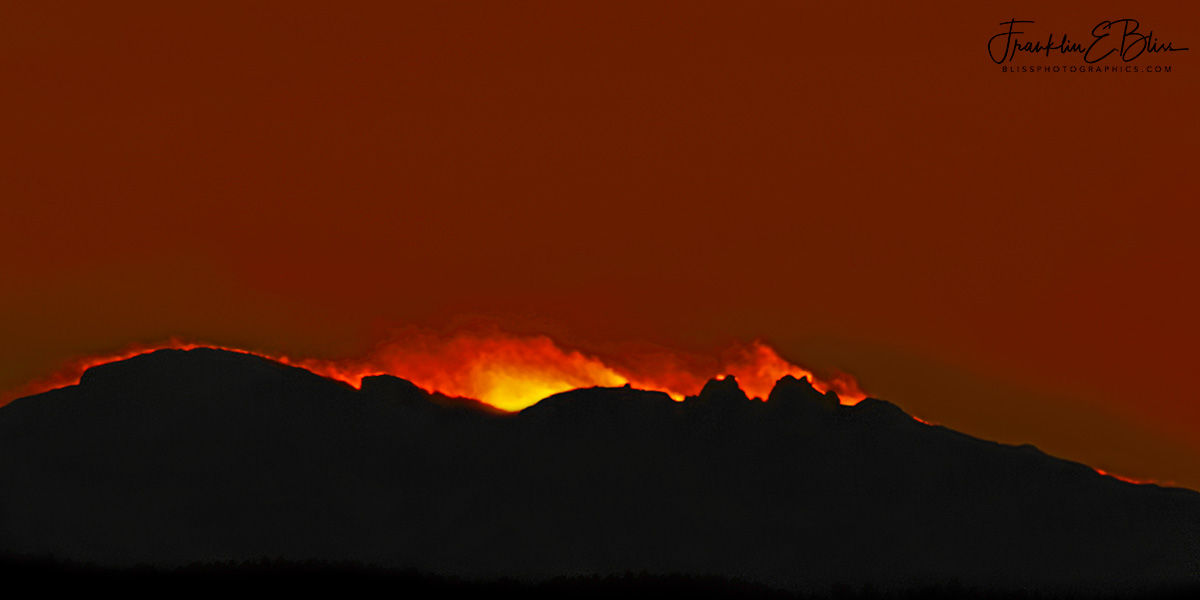 The sun had set a minute before. The wind on the peaks were certainly gale force pushing snow a thousand feet into the air or more. I’ve had more sun behind the “Big Horn Mountains” this week than I’ve had in 20 years of trying to get shots like this.

Bear in mind that the range is 130 miles away from my ranch. I’m look at a VERY SMALL part of the sky at 13000 feet high peaks. Twice a year in the late fall and early spring the sun sets behind the BigHorn Mountains. The angle changes depending on where you are from the range. At this distance, you need really long telescopic lens ability to get “this close” from my place. I suggest an 800mm lens to start..

This is an 800mm lens and the image is a 2:1 Aspect ration 40 inches by 20 inches at 300DPI. I personally love silhouettes and pursue them as readily as images showing the detail of the trees on the peaks in daylight. You gotta love huge mountain chains 📸

Boy do I have images from this week of the Big Horns 📸. 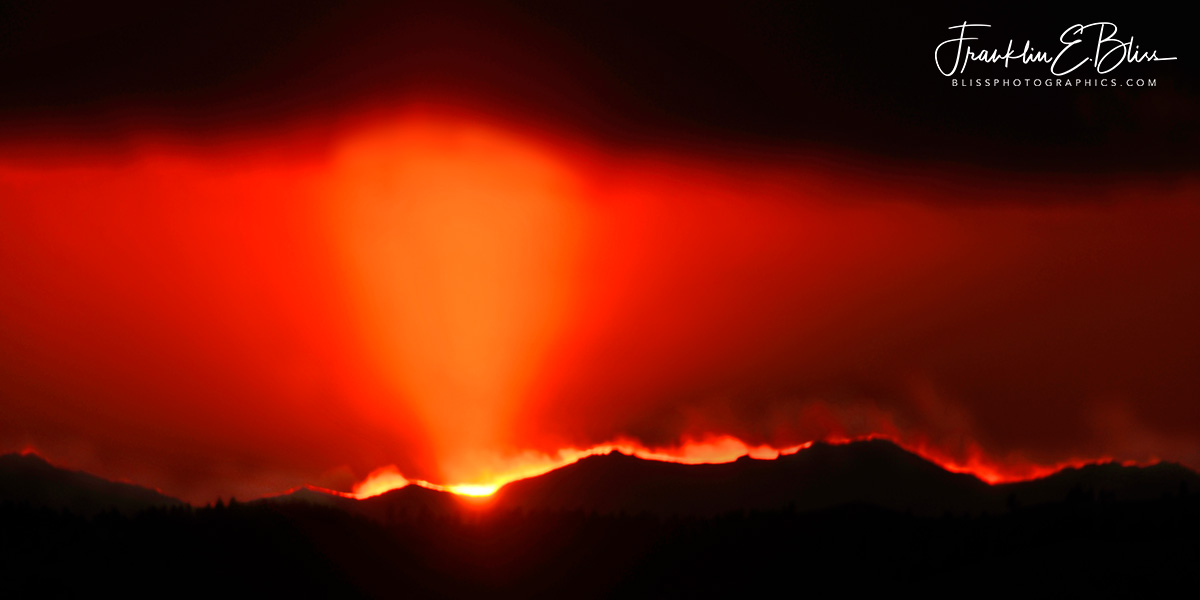 This V-shaped Sun Pillar over the Bighorns northern ridges was magnificent from 130 miles distant.

The Ground Blizzard on the peaks must have been intense at the peaks for it to blow so obviously. Remember the area of the sky in this photo is smaller than a postage stamp at arms length. I look into really bright little areas of the sky with my gear. 130 mils is so far that the air between here and there becomes a serious deciding factor if I can see the range or not. It’s the ice in front high between the ranch and myself that is lit up by the sunlight pushing over the saddle between the peaks. The sun is actually down for this so this is a night shot 😎

LONG telephoto shots like this are deceiving. Hold a postage stamp out at arms length and look at the horizon. This image would fit into that stamp. A 1200mm looks at very small things on the horizon. The mountains in this image are ONLY 9,000 – 10,000 feet high at this northern section of the Big Horn Mountain Range. The Big Peaks are to the left of this frame. .

Title: Sun Pillar Over the BigHorns 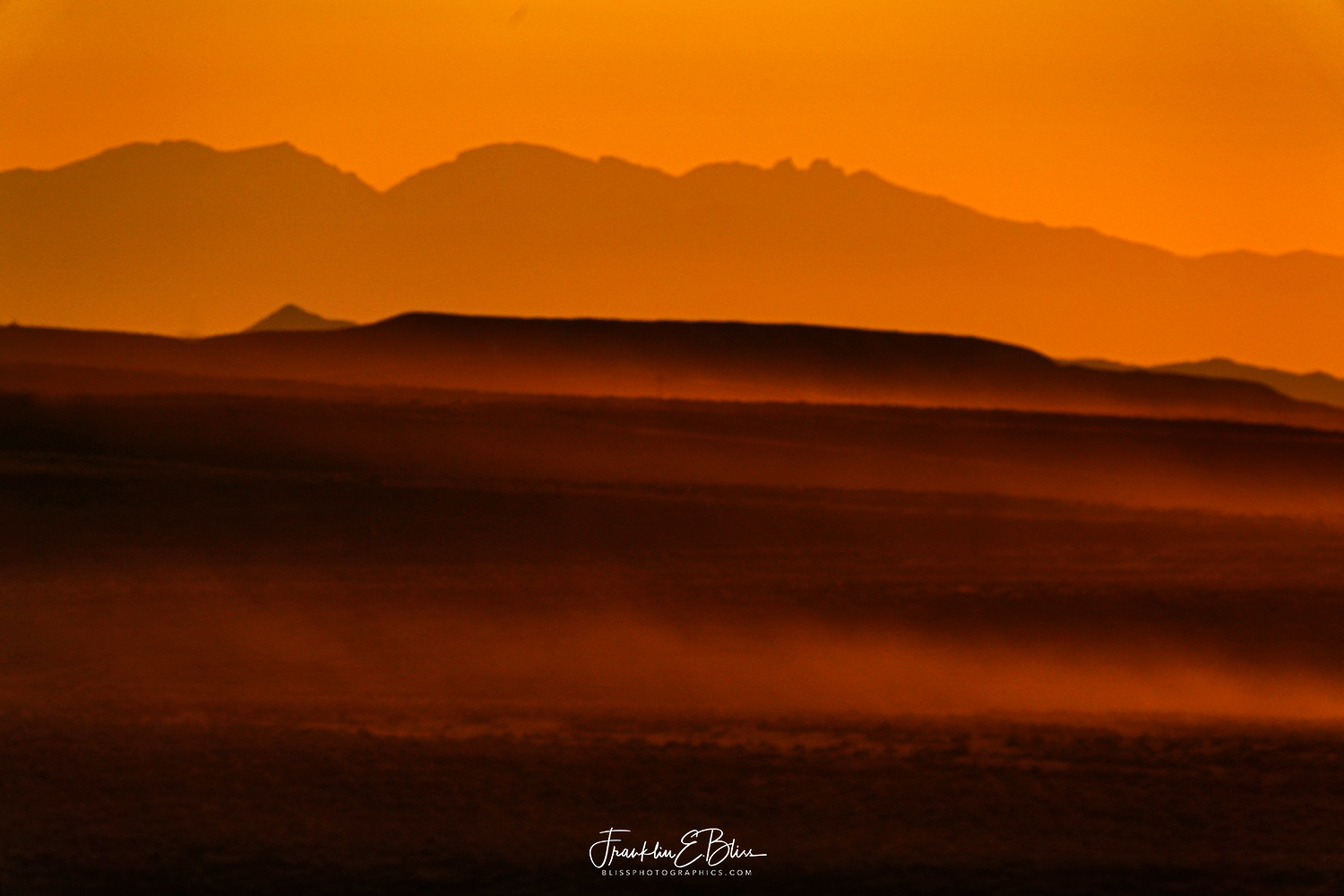 This Big Horn Mountains Dusty Sunset brought to you by me driving back from Gillette the long way back Via Recluse Wyoming and Elk Creek Road. It’s a higher elevation drive over the Red Hills (about 40 miles from my ranch to the west).
The Big Horns are right at 100 miles out from my camera in this image. The air was so still that that is the dust from my travels from miles back. Most of the roads up in the backcountry are at best gravel and Campbell County usually has pretty good roads. Speed Limit is 45 on the gravel up here.

I took this Sept 30th the day before the October 1 storm came in so this was the Last Day of Fall for the BigHorn Mountains eastern front. You could feel the storm coming in. Everybody was buying snow shovels and salt at the local farm store.

These 13,000 foot + peaks dominate the landscape near Clearmont Wyoming. The highway State 14/16 from Gillette to Sheridan Wyoming will present you with this view if you stop at the right spot :).

This is a composite of three images left/center/right carefully blended/stitched back together within the digital darkroom. As such is it ended up being 60×20 inches at full resolution 300 dpi so the original is a huge file reduced here for social media of course lolol.

Oct 1, the region got 4 – 12 inches of wet heavy sticky snow on trees fully leaved still from the 75 degrees the day before when I took this on Sept 30th.

I of course take photos of these hills all the time from my Ranch about 100 miles over my shoulder at this location. I get a little better resolution up here📸