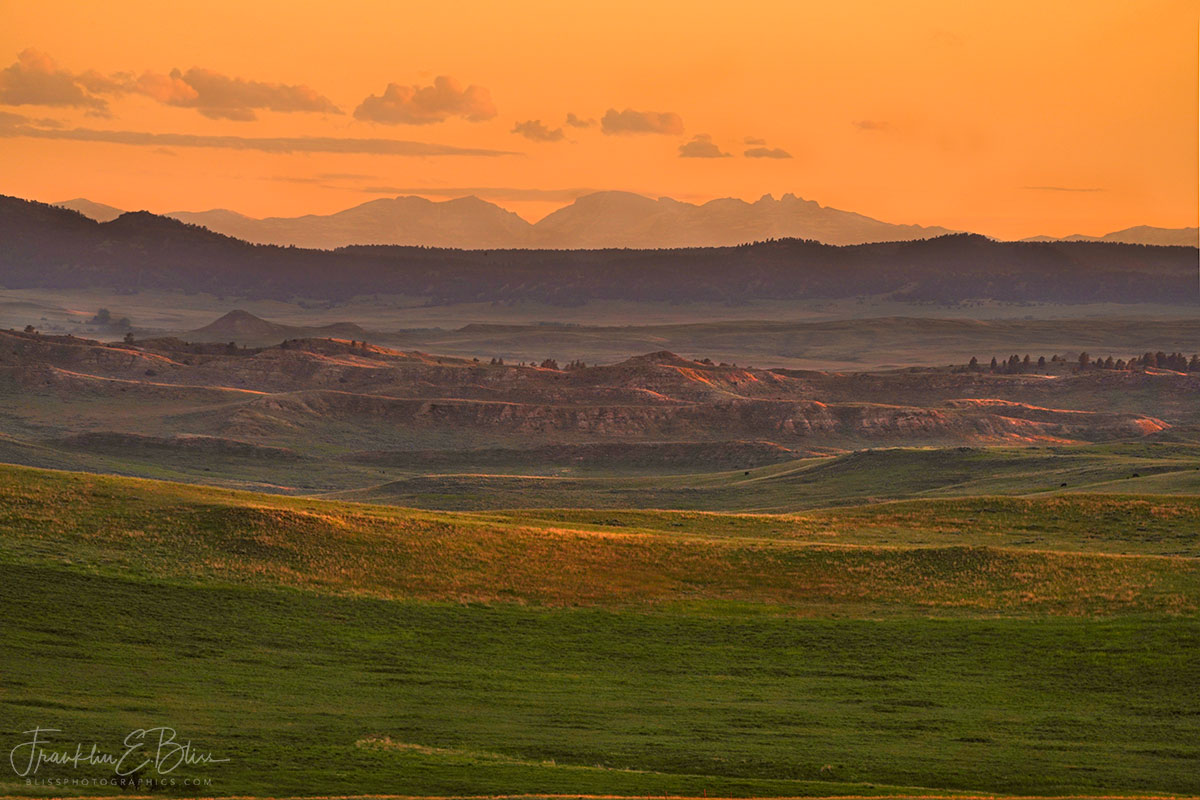 As the solstice is tomorrow, I thought I’d show you what a Bighorn Mountain sideshow looks like with a far northern sunset. The sun is WAY off to the right of the frame. The landscape ladder here climbing off to the 130 mile distant 13000 foot tall peaks leaves me speechless more times than not. Now this is a very long lens which crushes perspective. The second furthest ridge is 40 miles away from the ridge I’m standing on. My elevation is about the same as the saddle on that second to last ridge. The red layered badlands are only 10 miles distant.

Those red banded layer hills are all Tullock Formation. The rocks exposed on the surface all the way back to the Bighorns have been carried there. A complex process by rivers of the past. These moving eroded by the elements, sediments off the peaks. All running down slope from those world class hills. At one time there was a smooth ramp all the way to the peaks to my feet. It was a smooth slope that huge alluvial fans were deposited off the Bighorns. The middle of those alluvial fan stack are dissected at right angles by the Big Horn, the Powder and the Little Powder Rivers.

The rocks I stand on are older Cretaceous Terrestrial Sandstones with their share of Dinosaurian fossils. (Hell Creek/ Lance Formations) These older sandstones are dipping toward the Bighorn’s Powder River Basin being downwarped with the formation of that regional structure. About a mile off my ranch’s west boundary, the alluvial fans overlapped the Cretaceous River Sands. The dinosaur fossil bearing rocks diving deep off toward the mountains. 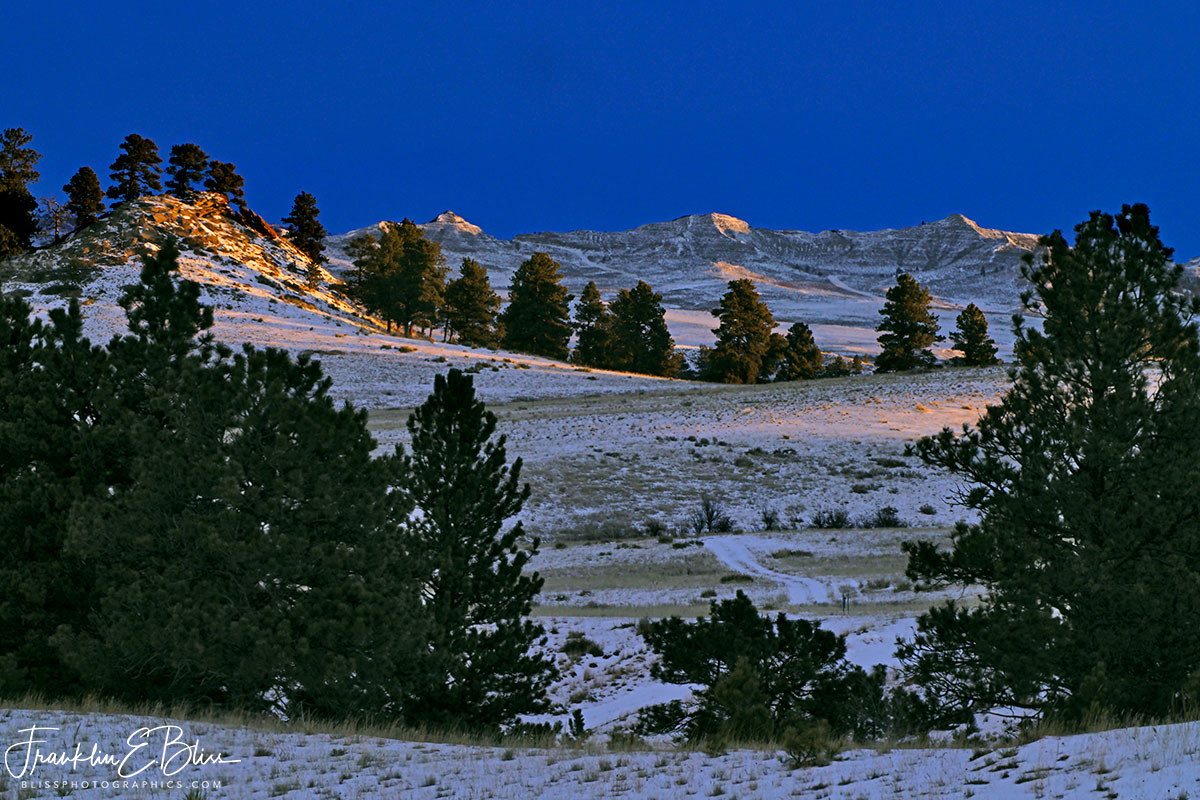 Here I stand in Wyoming and am imaging across the Montana/Wyoming Border looking at the “Mud Hills” about 10 miles distant in Montana. The intervening valley shows the erosive power of little “Ranch Creek”. Ranch creek is about 10 feet wide when its flowing. This drainage removed all that sediment covering the horizon OFF where I’m currently standing exposing the dinosaur fossils in the older rocks. This is the country I call “Wyotana”.

Our Ranch, totally covered by the Cretaceous Hell Creek/Lance Formation differs from the distant hills. . I stand on the famous that dinosaur fossil bearing Cretaceous sandstone. . The distant “Mud Hills” are younger rocks. The sediments composing them were deposited AFTER the dinosaur died. All deposited in the Tertiary after the Big Horn Mountain Uplift to the west.. The Big Horns provided the sediments composing those hills. T All the way from the Big Horn Mountains over 140 miles distant to our west. Those alluvial fans totally covered this ranch . During some years past, they have been totally eroded from my place and are gone. Carried down the drainage one grain at a time. . ‘

Residual Wood. We do find occasional chunks of a particular type of petrified wood that is “residual” from rock layers above that have been removed. This wood is not native to the Hell Creek/Lance formation. We find random chunks laying here and there… isolated. This wood is VERY hard like quartz and survives when everything else breaks down into sand grains. That wood falls as the rocks below turn to sand and wash away from below them. Thus “Residual” wood, left over from formations no longer above us but we find it here and there. 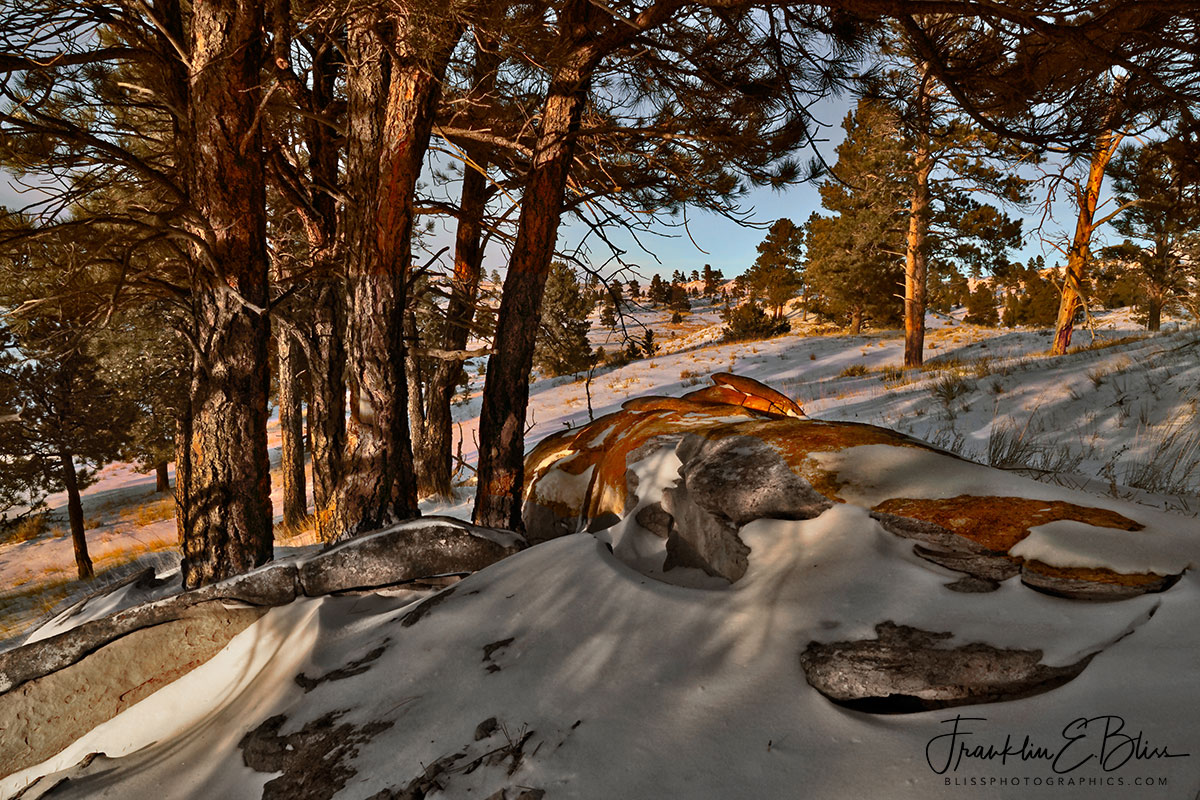 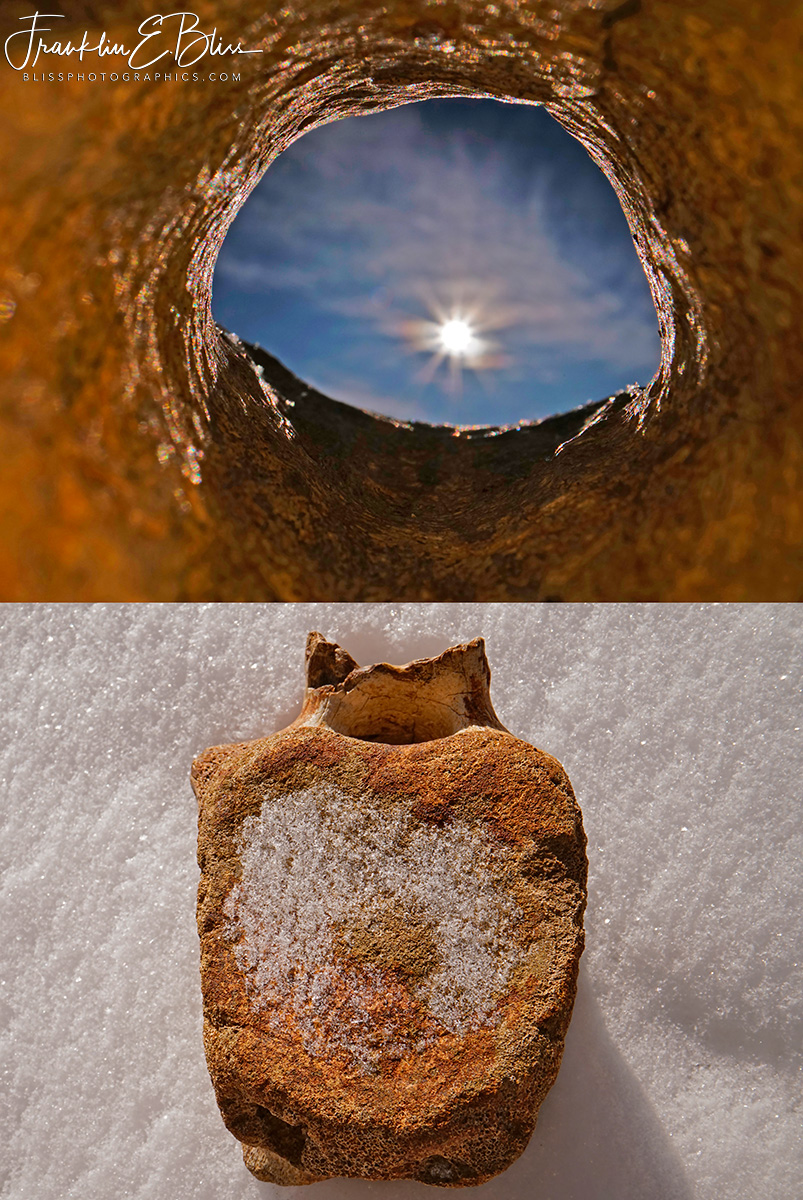 I saw this centrum sitting about in my outdoor rock pile lightly frosted and saw the possibilities lol. The top view is something that not many have seen. The hole is big enough to get your thumb in.

This vertebra was from the lower back area of a Hadrosaur (duckbill) dinosaur. It was found sitting on the surface in the grass at one of my sites. Sometimes all I have to do is walk around and pick stuff up lol. The neural canal was the first information super-highway. Long before fiber optics lolol.

Cretaceous Dinosaurs here in “Cretaceous Country.” Jurassic Park is way older. The End of the Cretaceous was the end of the rule of the dinosaurs over the earth. Those rocks are exposed here on ranch… The Hell Creek/Lance formations here are upper most Cretaceous sands deposited by huge sweeping rivers choked with sand. Bones were like wood then (and as big as branches mostly). Lots of small fossils too are present. Fossils of anything else that was in and around the water are discoverable along with the dinosaur stuff.

Everybody came down to drink sooner or later and was predated. The bones eventually got into the water and covered by fine grained sands and muds pretty quickly. The rivers were dumping sands by the boatload so the soon to be fossil got covered deeply quickly.

The missing processes are a result of being transported by the rivers. Any particular bone might have been buried, then re-excavated by the rivers moving back and forth meandering across the lands. We were just slightly north of the equator at the time. The continent was rotated about 90 degrees from how it is now.

Rule 1 of geology: Processes we observe today, were the same as in the past and will be in the future. Seems logical but some argue with this for what ever reason. I’m good with that.