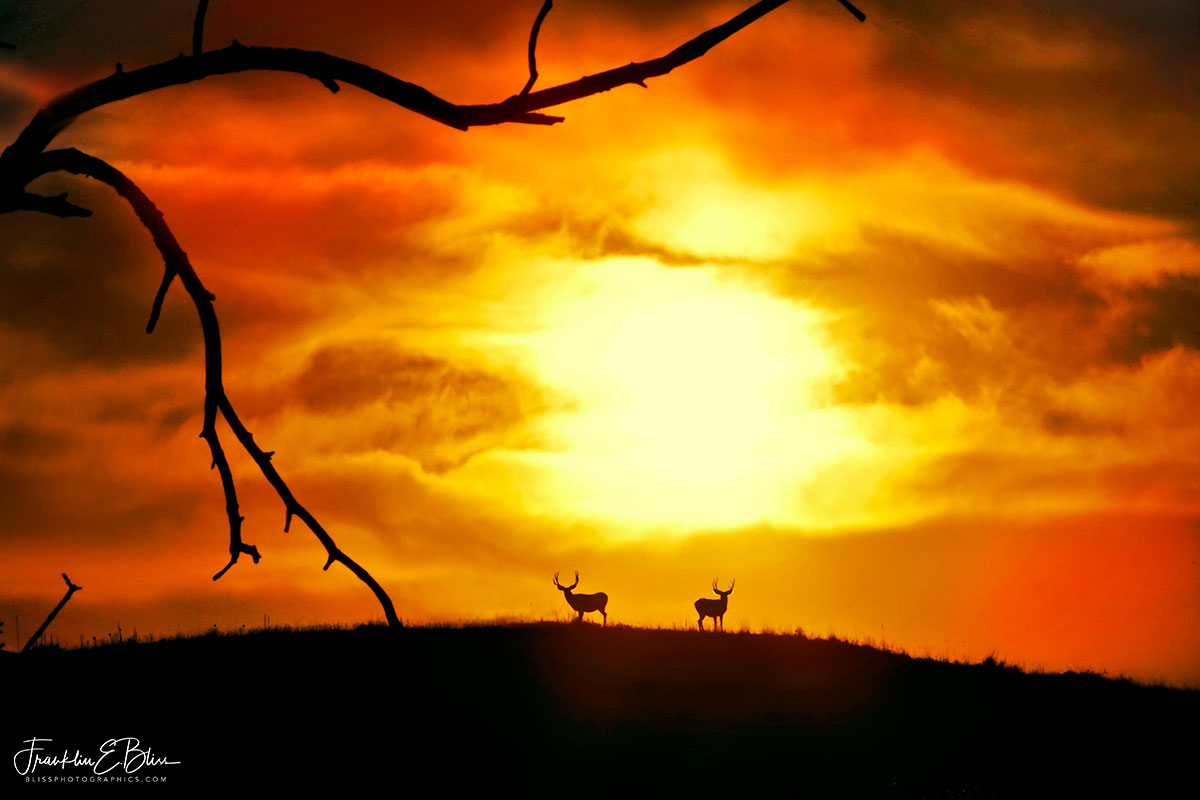 Lining Deer UP from hundreds of yards away against the setting sun is an exercise in understanding topography. By working parallel ridges I get to stay hundreds of yards away from the casual deer. not alert the deer and am still able to get far enough away to catch a foreground object in focus for three layers of image here.

I only get to have the planets align like this a few times a year. I only had one opportunity this year to have deer pose for me in front of such a show. Images like this are infrequent in their occurrence for me to work. In reality this is going on all the time, there just isn’t anyone there to take the photo. Getting into the right position for this is a lucky event.

I have known these two bucks for a few years and because aware of their tendency to walk this ridge an hour before sunset. They were on their way from their grass pasture to the water hole on the other side. Almost every day these two walked this ridge like clockwork. Following the same trail daily These two are still around. I’m not sure exactly where with the snows. The Backcountry is challenging to get back into at the moment. I see them both on game trail cameras near the water holes we keep open mid winter for them. If we didn’t keep water tanks open they would have to migrate. The closest running water which is some distance from this high ground. 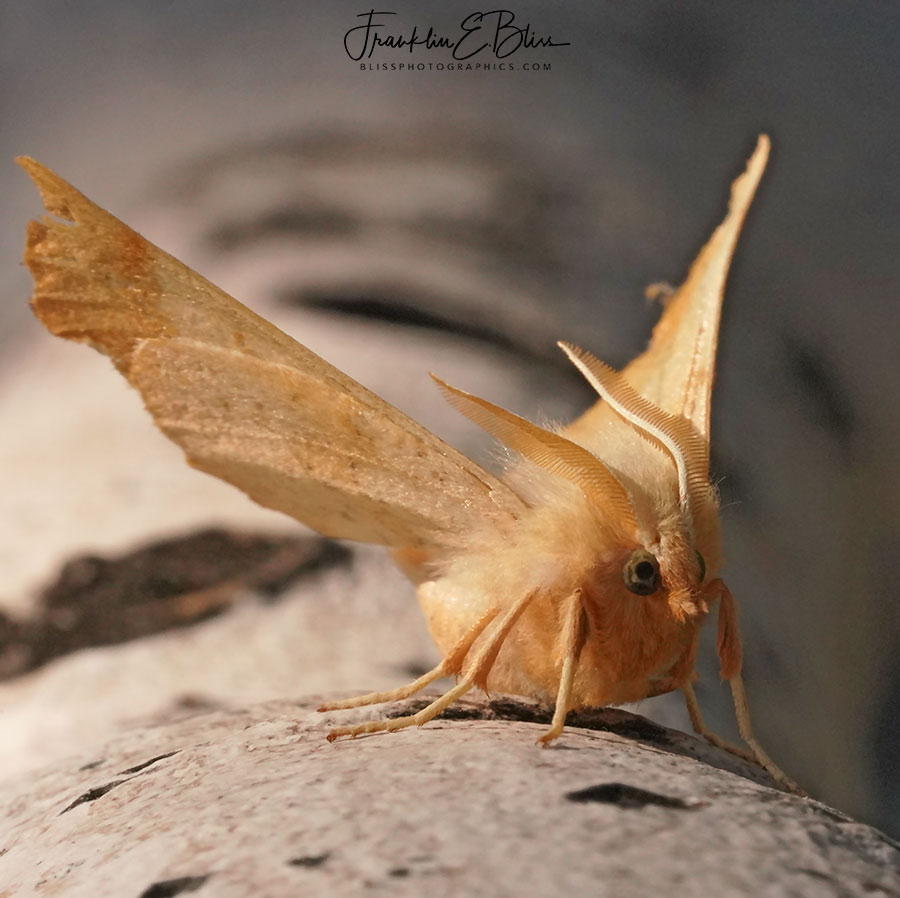 Hanging out in a “to do” folder this unidentified moth haunts me again. Many of you no doubt remember this guy from a much closer image I post of him. He has been seen by thousands of people and no one seems to be able to key him out and ID him. Here’s hoping someone will have a moment of recognition to a moth they saw 20 years ago.

Bug Photos are a favorite…

I had caught this fellow the night before hanging about a porch light. Then he was placed in an inflated gallon zip lock. Then into the fridge overnight. Next day I released the torpid 34 degree moth into a 60 degree environment. It had enough wits to hang on to the well lit tree branch I set him on. Between the sun and the ambient temperature, I had perhaps 2 minutes to shoot him. He did indeed flutter off in my typical catch and release program I run for my photographic volunteers. I haven’t seen many bugs since Oct 1 when winter started this year. . I think I too a photo of a Orb Weaver Spider on my front window inside my house since.

I’m about to photograph a Black Widow female I’ve kept alive. The crickets I grow in my green house’s front entry stairs. I just leave a little fish food around and they reproduce nicely all winter. The Black Widow is at least 6 months old here mid-winter. Her prison is a pyrex glass beaker on a shelf. She can not get away and I’m very careful with handling them. The biggest threat is to her not to me. They are fairly fragile. They break like an egg if you are not very careful and they are very fast. Stay tuned for that lol. . 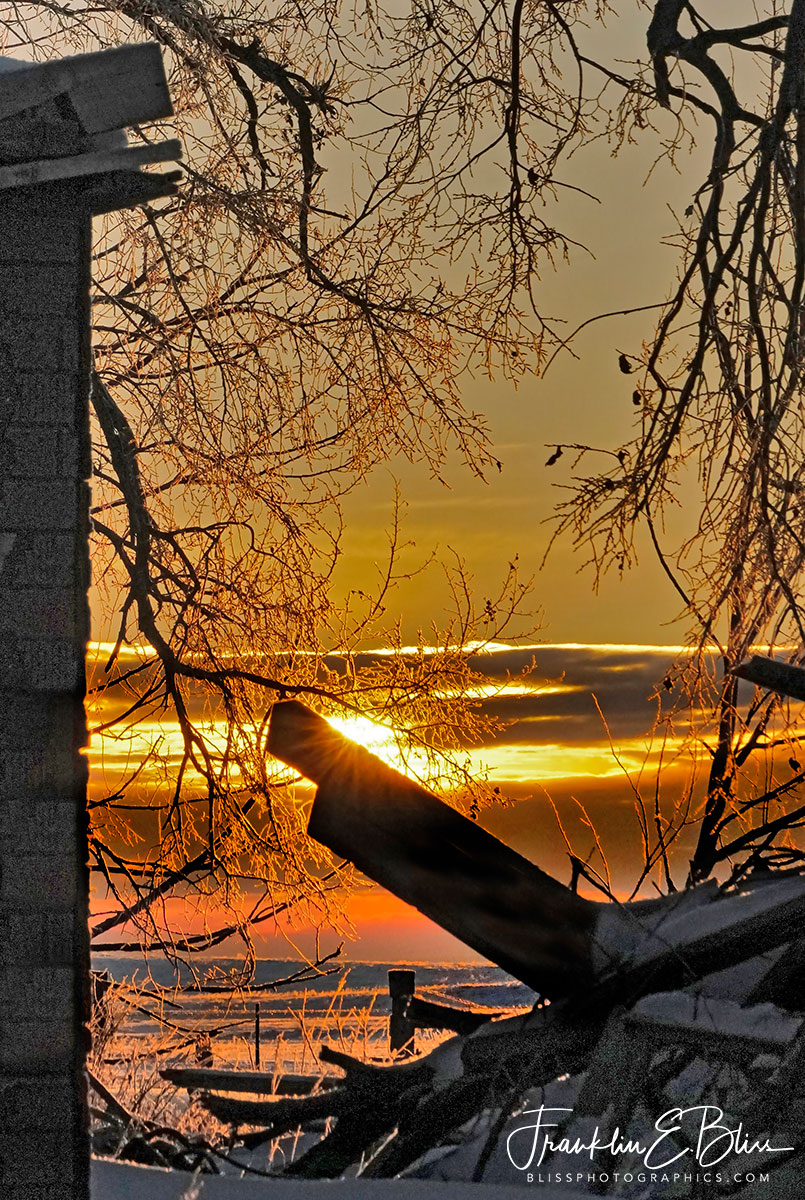 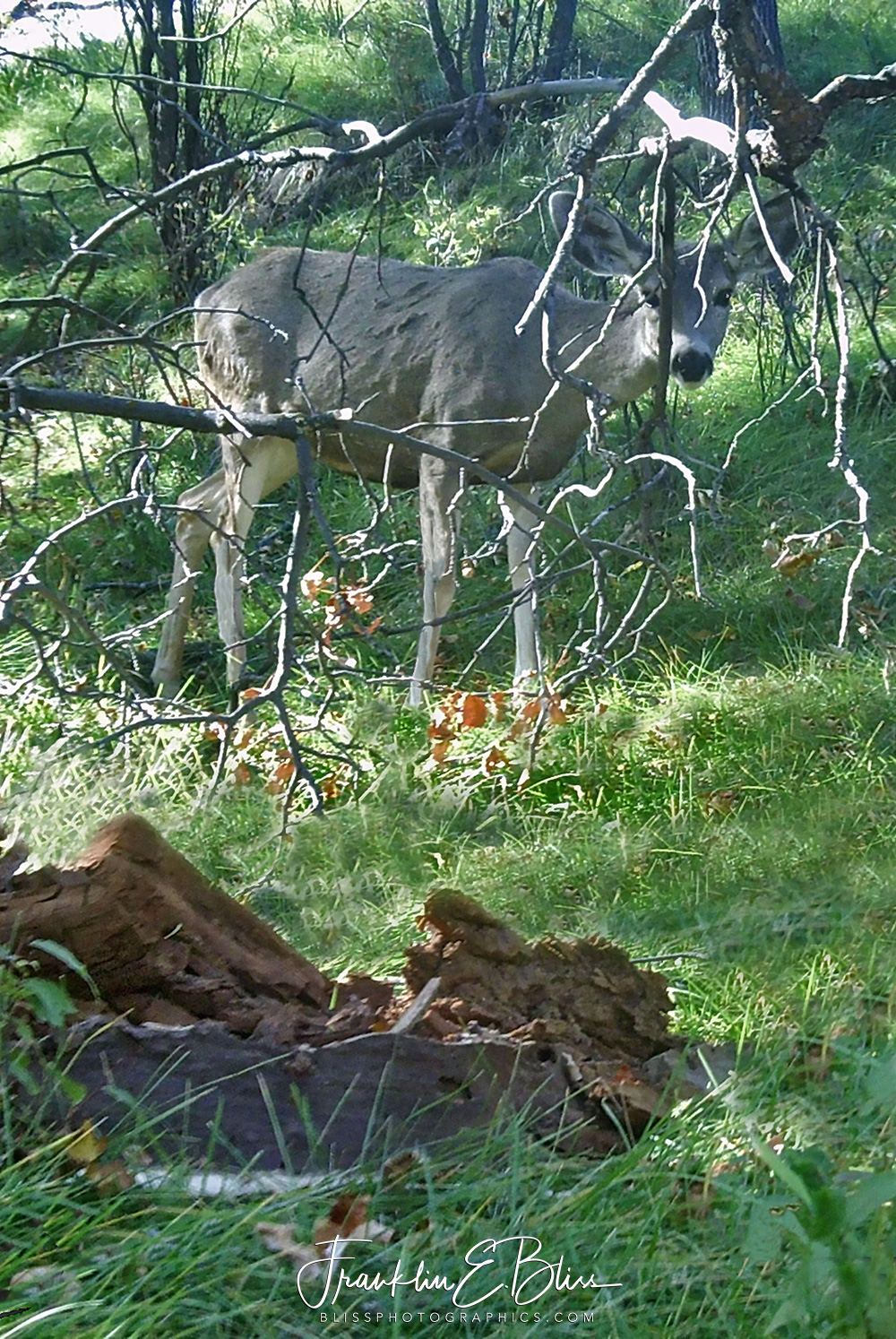 “Bet You Don’t See Me”: This deer heard something from the 360 degree game trail camera spinning (internally of a camo’d shell) and it made her look that way for a nice portrait view of her in that moment of time and space. This Automatic camera was planted on a short t-post in the middle of a natural traffic funnel and joining of trails here on ranch.

Located down in a deep gully and several fences funneling trails down to the spot are angled inwards to here. Anything that is going this general direction is channeled to this point where I keep 2 of my best Game Trail Cameras. There is a game/fence crossing about 20 feet behind the camera so anybody wanting from Montana/Wyoming across the border and back have to go this way or jump a fence somewhere else. Mostly Pronghorn and Deer choose the easy path and don’t like jumping. Deer Jump Way more than Pronghorn do fences. So they walk right by my cameras. You’ve seen several images over the last few months from these cameras.


Proper placement of Game Trail Camera is about the only control you have over those contraptions. Some do very fine quality images during the day (like this one). Others are better at night. Seems no one builds the ideal Game Trail Camera for me yet lolol. I run a network numbering 26 of them currently. They cover a lot of choke points (water holes, gates to feeding grounds, etc).

You can usually set three different exposure levels and sensitivity levels for the movement IR sensor but that’s about it. Set it and walk away for weeks or months. See what wanders by and what the cameras built in auto software does 😊 . It’s be nice if they would do a 3 shot exposure bracket. Maybe someone makes one but I don’t know of the device.

This would make a tough 1000 piece puzzle lolol.

Bet You Don’t See Me 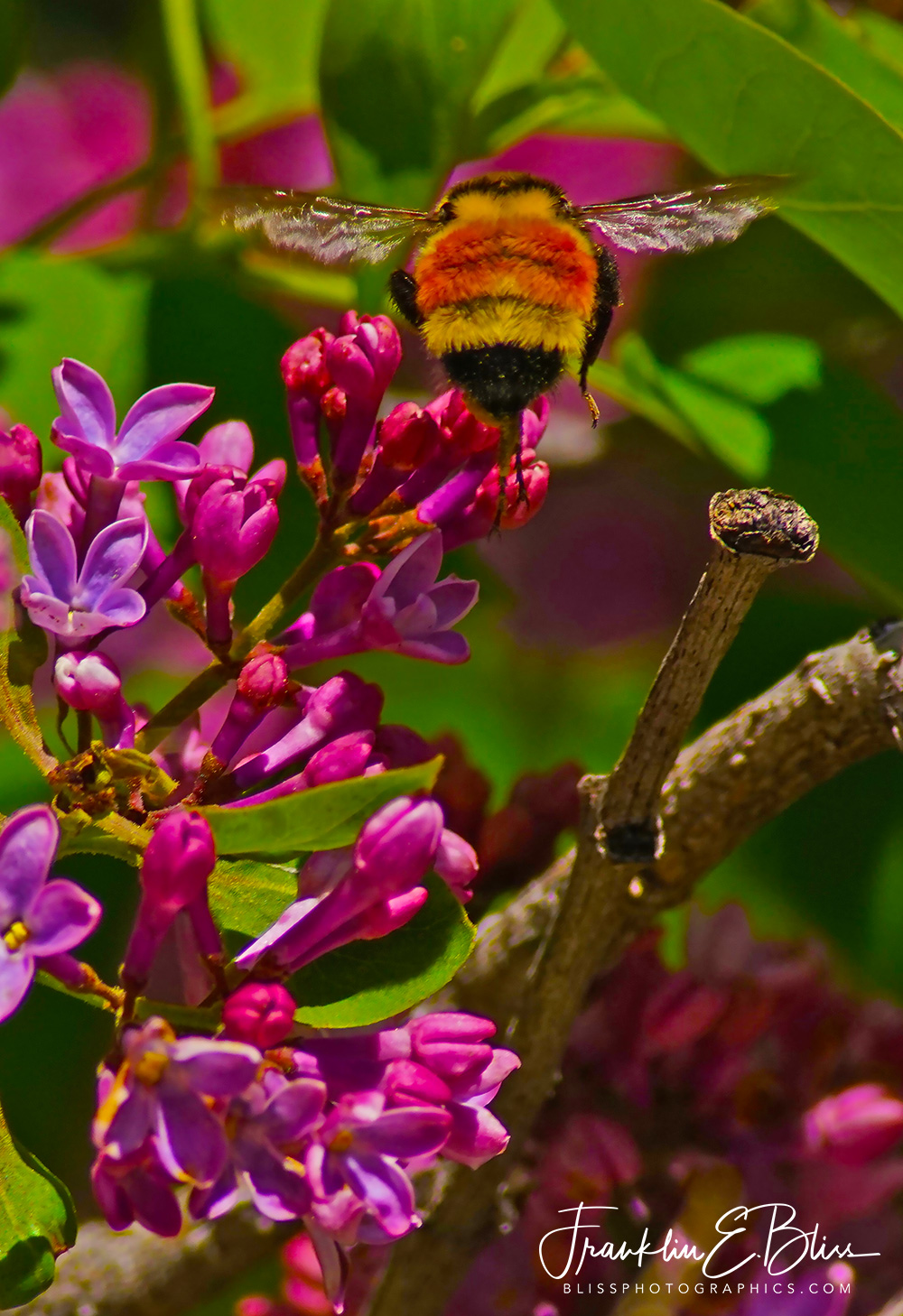 Bumble Bee and Lilacs on the 4th of July was occurring until July 4thin 2019. I have many photos of bees on lilacs from that day. Latest Lilacs in the 30 years I’ve lived in Wyoming that I recall lilacs in bloom. that late. There are several species of Bumblers that were working the pollen conveyer belt to the hives. I have yet to find a natural hive on the ranch but they sure are here.

We have had a large west coast honey company place hives in small truckloads on the ranch. They gather honey from the every other years Sweet Clover bloom we have here. It’s miserable for me with allergies flaring from all the clover pollen and it’s a serious fire danger. iI all that clover dries out but the honey sure is good lolol. We get a big box of honey from production each year as “rental” for the real estate the hives take up and feed from. WAY more than we use in a year.

Of course, Honey lasts way more than a human lifetime…. There is perfectly good honey found with ancient Egyptian artifacts in jars. Just heat and eat lolol. It’s full of antibacterial properties. It has been used for centuries (honey) to treat a host of ailments successfully and may be a good antibiotic I’ve heard. (rumor).

With Winter moving in early this year having had several good snows and hard freezes starting Oct 1, I thought I share an image from last spring as everyone needs some purple in their life at least once a week. I haven’t posted a bee for a while 😀 There will be a few bee shots incoming all winter as I refinish old images to meet my current higher standards. 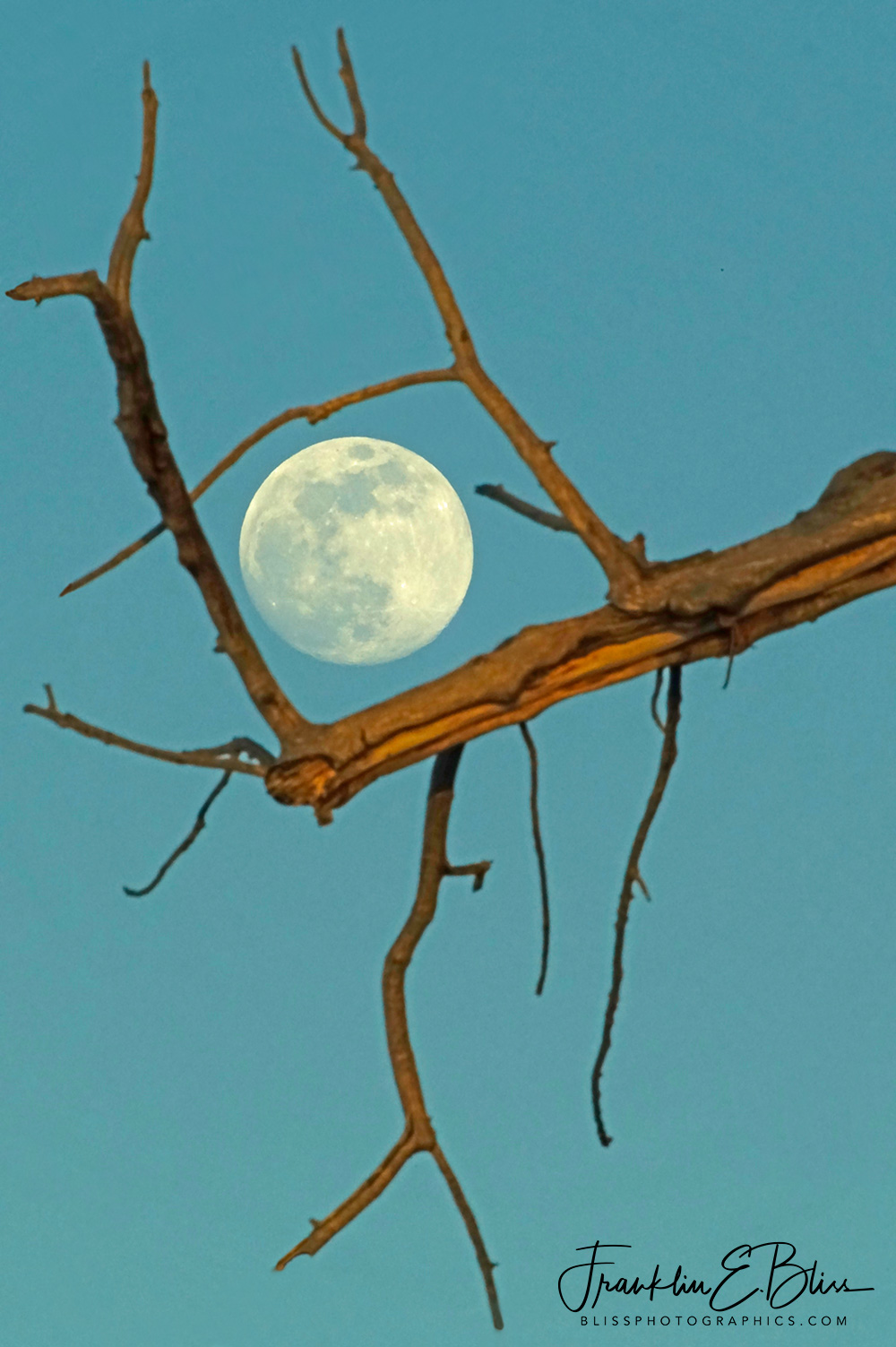 (Satire): I caught this hungry “Ent’s” hand trying to grab the moon. I actually had to step on his toe… err….. root to distract him. (But I got the photo first!)
The moon got away of course… Good thing I did because if he grabbed that moon for even just a few seconds…all those tidal charts would be off…what a nightmare.🤔📸 So it seems I saved the world yet again from catastrophic schedule disruption. This has got to be like the 10th time I’ve stopped these Ents from grabbing that old hunk of cheese😂

Back to my normal scheduled programming….