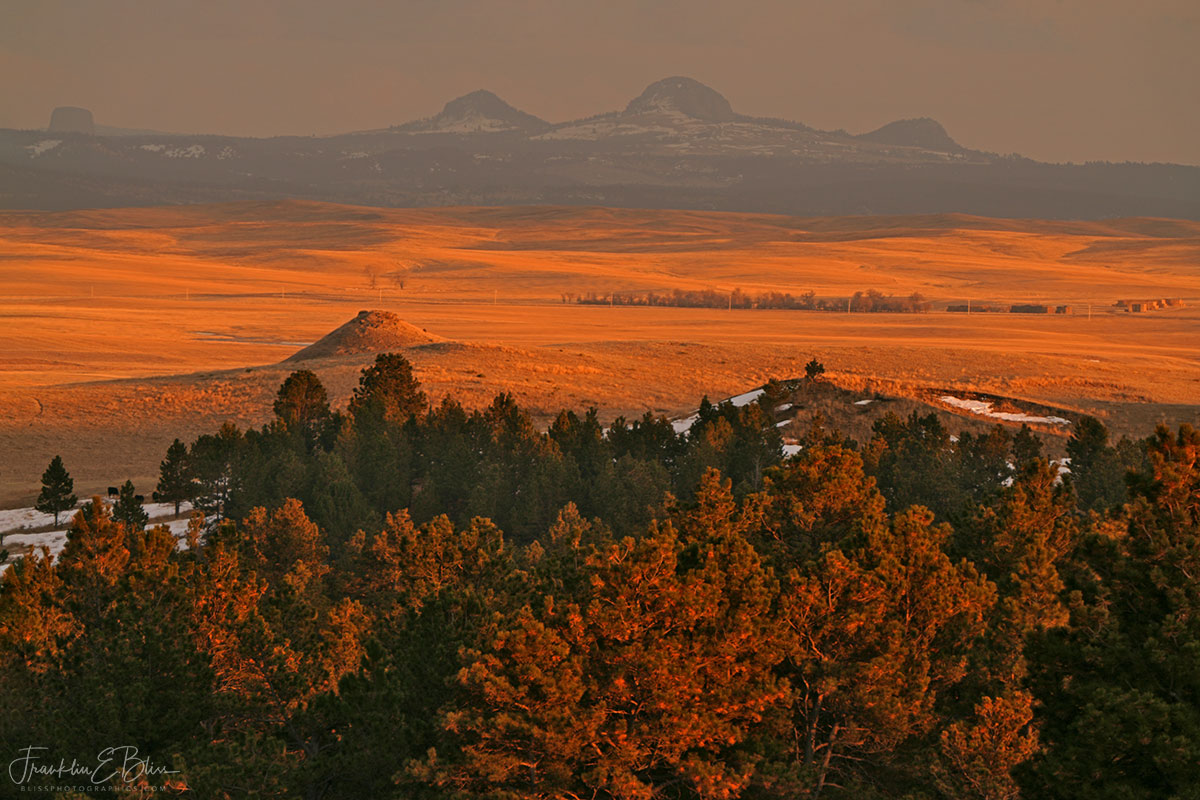 Later in the Golden Hour having worked the scenes leading up to this spot, the sunset over my right shoulder. I position myself at the top of the pass on Trail Creek Road that leads from remote to very remote country. The 35 mile distance to the Devils Tower on a day where only the sheltered hollows have snow remaining. The sublimating snow added moisture haze directly to the atmosphere bypassing the water phase entirely in this dry air.

The clouds to the west Shaded the National Monument (Devil’s Tower) to the far left and the subject of this composition the Missouri Buttes. These Exposed Volcanic Necks are erosional remnants of certainly thousands of feet of “volcanic neck” that have been removed. The Original Material (Volcanic Porphyry) stands tall. The sedimentary aprons surrounding the central mounds are the alluvial fans all merged together over time. The google word is “Fanglomerate”.

IT was the light that attracted me to capture this scene. I see this stuff visually and have to coerce my camera’s to properly configure. It’s a process up stream against the chaos principal certainly. After all I do deal with various rules of the universe in my daily travels. Unfortunately for me I can’t ignore some of them. Others I can’t miss. The play of light in this image led to a nice brown season layered landscape. Taken two weeks ago when as this posts. 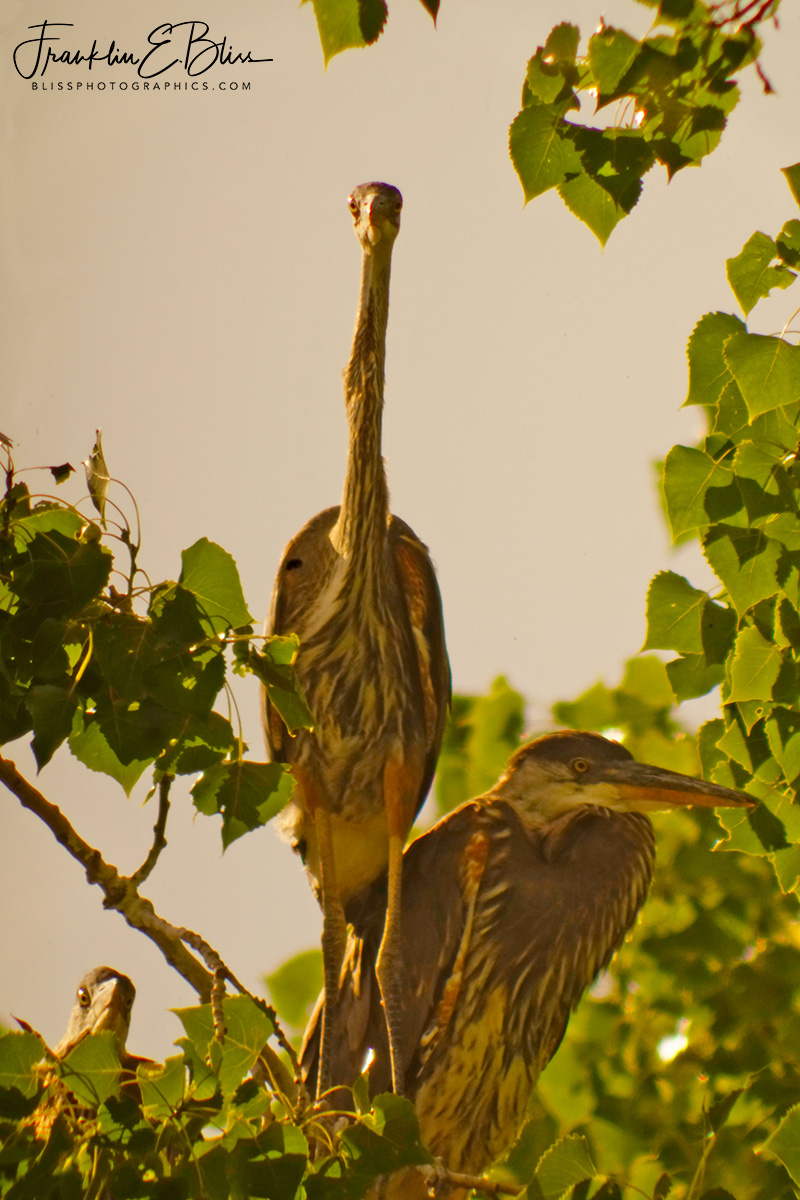 Having a Photobomber sneak into “Fledgeling Great Blue Herons” was a plus. I was focusing on the two above and in comes the head on the lower left frame. Curiosity got him in the photo lol. I appreciate him extending his neck as the tree was in his way. They can lift their necks up so high after all. Remember these little guys stand up to 5 feet tall and weigh 4-5 pounds. Masters of their domain they are 😎

This was tough light but I’m pleased with the opportunity to catch these guys before they migrated away from the rookery following their parents south. This image was captured early summer and the cottonwoods were fully leafed. I often loose track of the nests as the trees fill in with leaves . Thusly the cover over the nests keeps the privacy curtain up rather well. Not much assistance to me but I’m sure the birds like it.

These guys were up getting some sun. Mostly they had their feathers here but they were still waiting for their first flight. Parents were due to feed them shortly. Breeding/Nesting in the high branches of Cottonwoods is a common thing to see up here. The Cottonwoods line water ways and courses in the borderlands of Wyoming/Montana. Tall and safe from any climbing creatures, they set up a home perched way up there. There were 6 nests inhabited this year in our rookery.

It is composited from three high resolution 1200 mm telephoto images combined back into one image in the digital darkroom. Left image + center image+ right image = this photo… This is not taking a cell phone and swinging a phone lol… I’m considering this one of the best daytime shots I have of Devils Tower from the Pass at Rocky Point and that’s saying something 📸 This is a distance of 35 miles. The sun was setting golden hour, the air was full of ice but hadn’t gone pink just yet. Maybe 1/2 hour to sundown.

This image was taken from the snow line on the pass I was on but you can see the valleys were not covered at this capture about 10 days ago as it publishes. The snow we got last night and today took care of the snow cover in the valley. We’ve had a very early winter up here so far. The long term forecast looks to be cold and snowy. We always need the moisture but it’s a trudge sometimes to deal with all the snowfall each year.

In all fairness to the rough weather we have here in the NE part of the state. Hat’s off to the folks in Jackson Hole and the high country along the western part of the state. It’s relatively mild living here compared to the decade I lived in Jackson Hole Wyoming. We used to get 6 feet flat in the back yard every year. Closer to the range folks would get 10. Cleaning snow off roofs is an industry there :).

We just enjoy MUCH more wind than Jackson Hole does. I’m not sure anyone living there appreciates the difference but I may be wrong. Migration of Wyoming folks are moving outwards not toward that area. 🙁