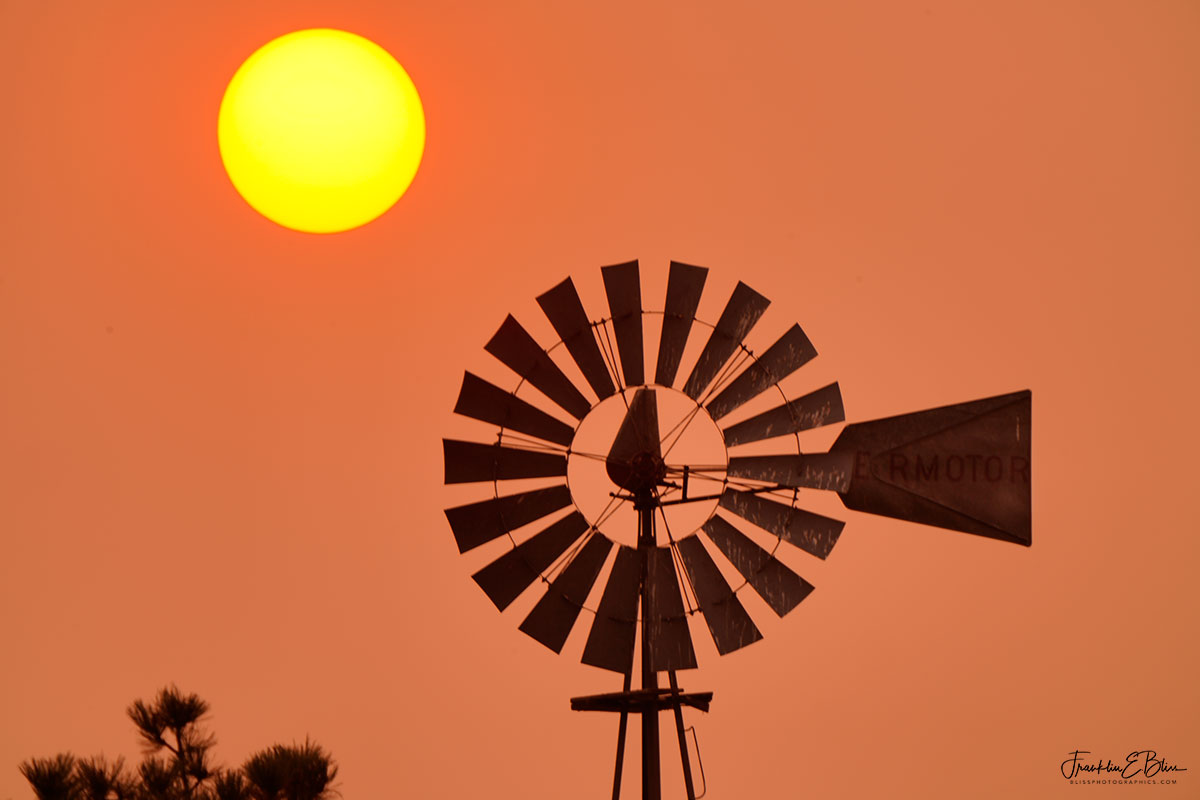 This is an amazing image to me. It is VERY hard/rare/unlikely/difficult and otherwise tough to get detail on the back of anything standing by the sun. I’m easily able to read AEOMOTOR (with the A covered by the sail). I’ve run my cameras for a bit. Having pointed at the sun a few times. I don’t believe I’ve EVER had this result…. This is a very odd color.. almost salmon. Never seen it before either. Seeing the surface detail on this side of the windmill… priceless.

First of all, this is a smoke Pall (of course) blocking about 80 percent of the suns light. IT’s very even smoke though and effectively a filter for the sunlight. The face of the Windmills Sail are in shadow. The ability of the best consumer technology is limited by your camera’s sensor chip being able to resolve the differences between really bright and really dark. This is known as Dynamic Range. THe human eye has 21 f-stops of dynamic range. The Sony Alpha 7R4 I used for this has 15 f-stops of dynamic range. That is really high for a camera in the current crop. Being able to see detail of a black cat in a coal bin in a bright white room is what dynamic range is about.

This is “Re Pete” the backcountry windmill. Big brother of “Sneaky Pete” the windmill that hangs out by my residence. I have to travel a bit and go through some gates to get to this guy. He is positioned on a wonderful little area. We call his home the “Treed Pasture”. Named that for the thousands of Jack Pines living there. This guy is functional. I’d have to change the pump leathers to get it running again though. It worked last time we used it in around 2008. Probably eeds some lube I suspect. He’s 40 feet up there and that sail is 8 feet across. A man can stand on that high platform and not come to the top of the sail. These are big machinations.