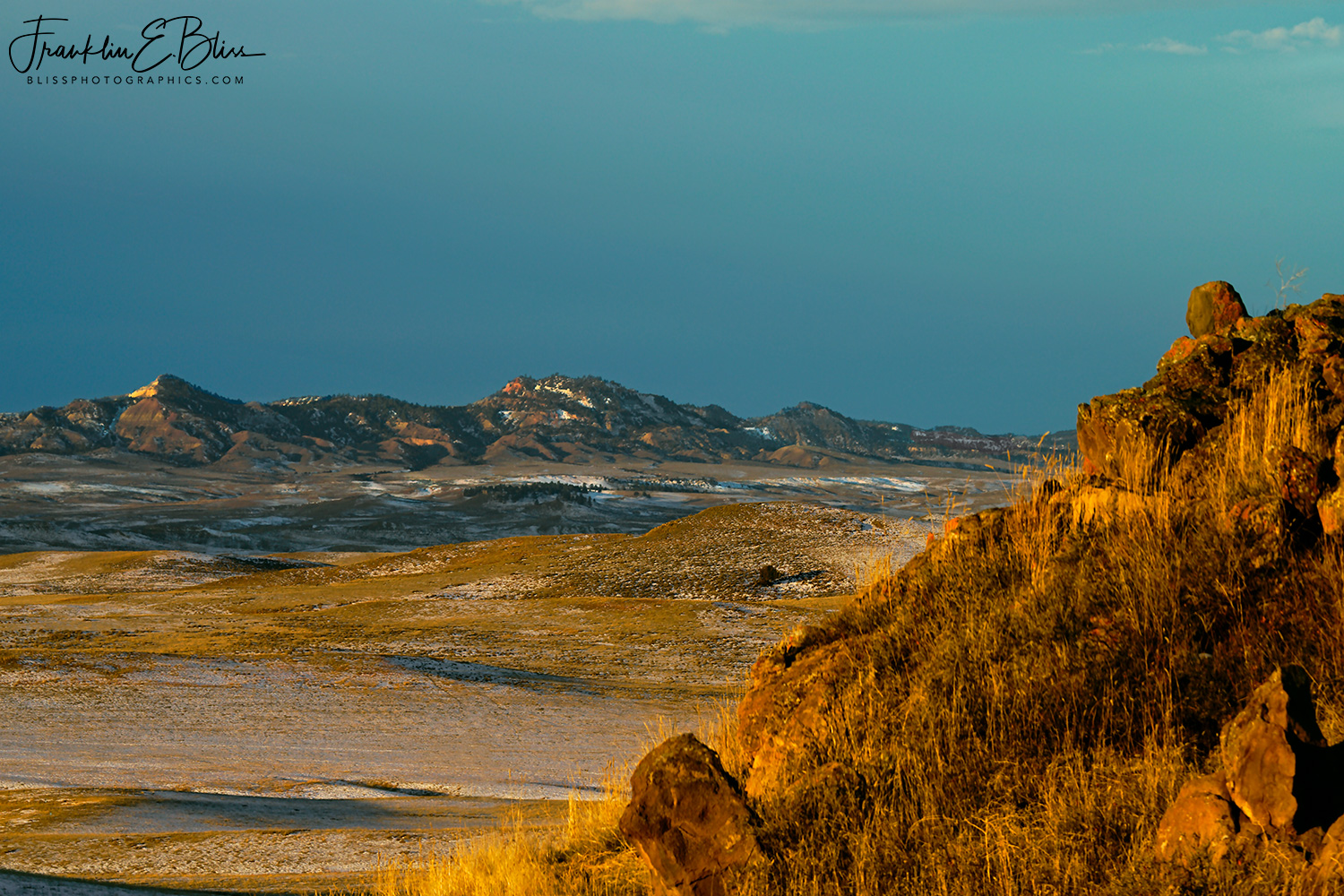 This highest point around “Red Hills Overlook across the Little Powder River valley to our west has a spectacular view.

This high point I’m standing on is known on ranch as Rattlesnake Ridge because the cowboys of the past blew up a rattlesnake den there or so the story was told to me by an old timer years ago. We don’t have a lot of rattlesnakes because of some dynamite that was a useful tool decades ago and easy to get then lol. I understand the den was blown up on this boulder strewn hilltop.

I’m actually standing in Wyoming for this capture. The Mountains on the horizons, the “Red Hills” are 40 miles distant and 15 miles into Montana as you look at the peaks. This image is 50/50 pretty much equal of both states lol. Lighting up here is wonderful at times. 😀

Geologic Musings:The Chain of Mountains in the distance is called the “Red Hills” which are what’s left after the Little Powder River at it’s base removed all the material between where I’m standing and that far ridge (40 miles out to the peaks). 😲 The “Little Powder” is a 10-20 foot wide river currently, was responsible over time for removing all that sediment between where I’m standing and that Mountain Chain…..That’s moving a lot of sediment over a long time (I’m at essentially the same elevation here as the saddle between the peaks in the distance). I am however stratigraphically (geologically) lower in the rock section though as the normally flat layers of rock formations are diving in that direction about 50 feet every mile. The rock units are diving into the huge bathtub that is the Powder River Sedimentary Basin at the foot of the Big Horn Mountains. You get 30 percent of your electricity from coal swamps formed in that basin nationally.

Regional Geomorphology: My ranch is literally located on the eastern Edge of the Powder RIver Basin and the western edge of the Wyoming Black Hills geomorphologically. I’m located pretty much on the “inflexion point” between those two regional geologic structures almost exactly… Both structures resulted from a regional compression on a huge scale about the same time because of huge tectonic forces acting regionally bending layers of rock about. 🤔 I live on the middle of the teeter-totter this way too …..