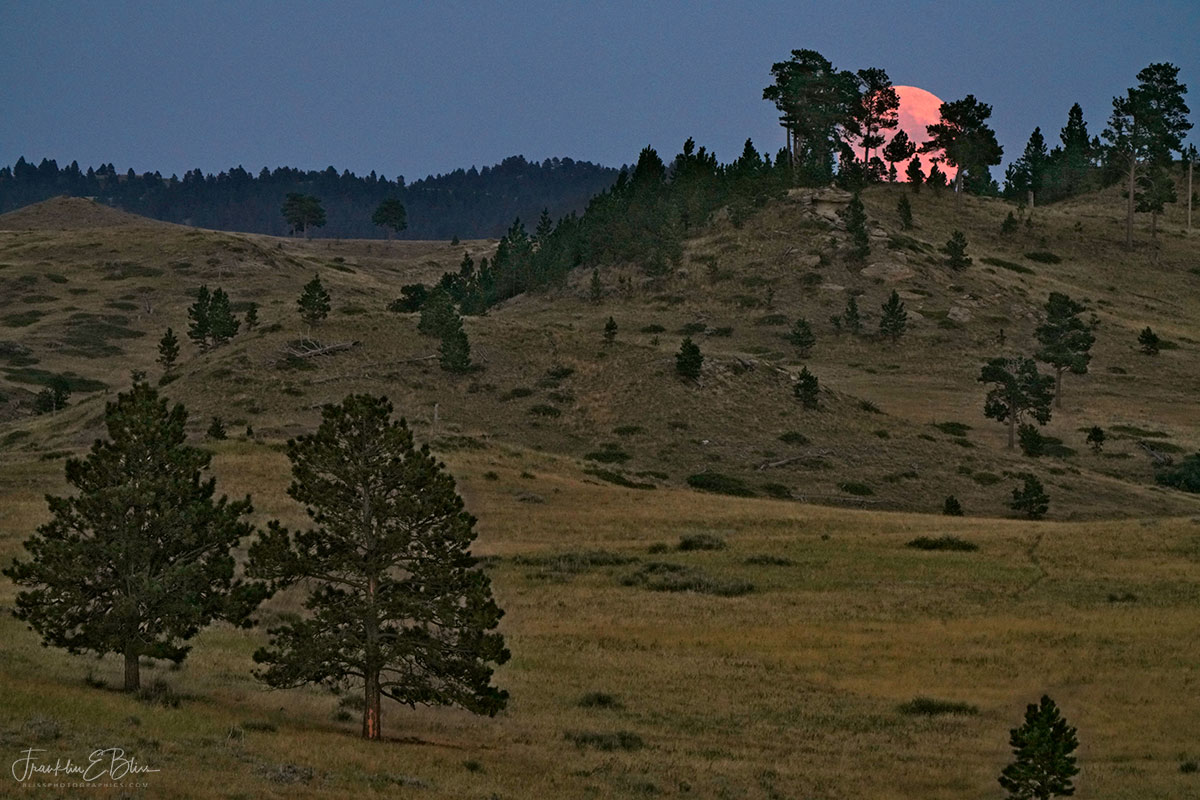 I have not seen too many pink full moons but this one was REALLLLLLY pink at it’s first rising. It slowly turned to a very orange orange as it rose. I have one or two images where there is a pink to orange gradient barely visible on the lunar disk. I photographed the whole timeline from just cracking the horizon to clearing the trees in many different ‘zooms”. It was truly a startling color to me at the time.

That color is frozen in my memory until I die as I’ve not seen the phenomena before this way saturated naturally. I made sure to finish the image photo-realistically accurate as I can here. The hard work for me on this capture were the details on the landscape and in the trees. The moon was “easy”.

Technically the sun was “up” above the horizon behind me for this. It was however cloistered and obscured behind a significant cloud bank. When the moon rose, the sun had about 13 minutes before it set. I continued to move around the ranch and shoot close far perspectives for the next hour or so. This month will be only this night’s work as tonight a storm moved through and obscured night 2 of the Sturgeon August 2020 moon rise from my vantage point.

I had actually worked myself into a precarious position on this cliff to get these captures. I ran out of topography to get where the composition needed to be. This is a close as I could get lol. It doesn’t look like much but I only had bare minimum equipment to get this view. I had to climb to get the angle on where the moon was to rise.

I had some bright idea of getting those old growth trees on the horizon. Since the closest trees are about 1/2 a mile out, the close far perspective doesn’t do the location justice. I had crawled up on the steep side of the tall butte I call “Lookout Butte” which you pretty much have to scramble climb up. It was pretty windy at the time which is always helpful trying to get a long lens camera still. I was pretty much resting cameras on rocks about 1/2 of the time lol.