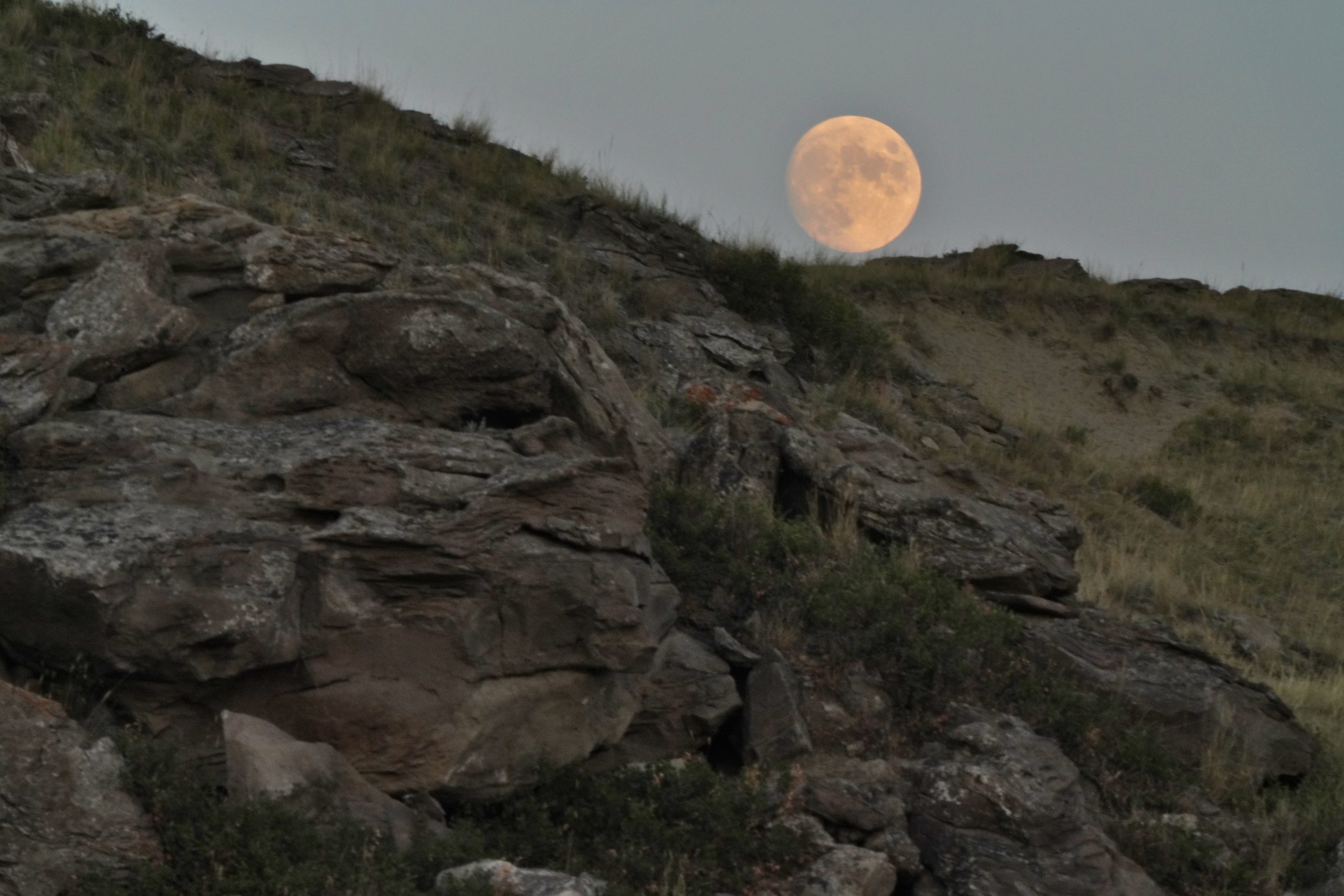 The convoluted bedding of the Hell Creek Formation Sandstone bedding in the foreground is a long way from the moon. The same moon was peering down over it’s deposition here on the Cretaceous piedmont existing 66 million years ago. Similar to a tropical North Carolina with Mountains to our west Paleo-geographically BEFORE the Bighorn Uplift. Those mountains were eroded away prior to the Larimide Orogeny Mountain Building episode. Those mountains all turned to sand grains I stand on. That moon back then was a little closer and bigger however. Dinosaurs looked up and watched it loom bigger over head (for another post). Our ranch is covered by this Formation at the surface. A known dinosaur bone deposit is about 1/2 mile distant from this spot.

Paleontological Musings: A series of MAJOR Rivers flowed around here in the Late Cretaceous. Some certainly as big as the Missouri River swept back and forth across the landscape. Leaving behind sand but snaking back and forth meandering on a surface it can’t cut down into. Shuffling and reshuffling the sands. Several times a fossil dinosaur tooth were excavated. Only to be redeposited dozens of times. Over the 3 million years this particular sand conveyor belt sedimentary system survived. Leaving about 700 feet of sands. This is literally sandstone country. We have more sand that most public beaches lol.

Upon the Ancient river dropping it’s load. When something else heavy covered it. Sediments flow like plastic. Pushed around underground like silly putty under your boot and a hard place. We get all sorts of various sandstone creations by mother nature occur in this country. Hydraulically reworked soft sediment deformation is a common occurrence. Boulders are left behind. The softer sands around them are blown or washed away. Those boulders were hardened. Cementing minerals in ground water responsible. That passing through the sands. The boulders cemented obviously better/harder than the sand that blew away exposing them. These sands moving down river to the “sink” filled up the Cretaceous Interior Seaway over time. Then the asteroid slammed into Mexico……..

I only get to play with a low full moon with the sun still up one or two times a month assuming the weather cooperates. Here the sun had just been obscured by a low cloud bank as it was setting. Low light makes this close/far perspective much more difficult to obtain. Of course the really hard part here is getting something like this close chunk of ancient river bed in focus. In focus at “infinity” along with the moon in the background that looks very large rising over this ridgeline. I’m shooting at least 400 yards away ( almost 1/4 mile) from that pile of rocks. Distance is your friend when attempting this type of composition. 📸