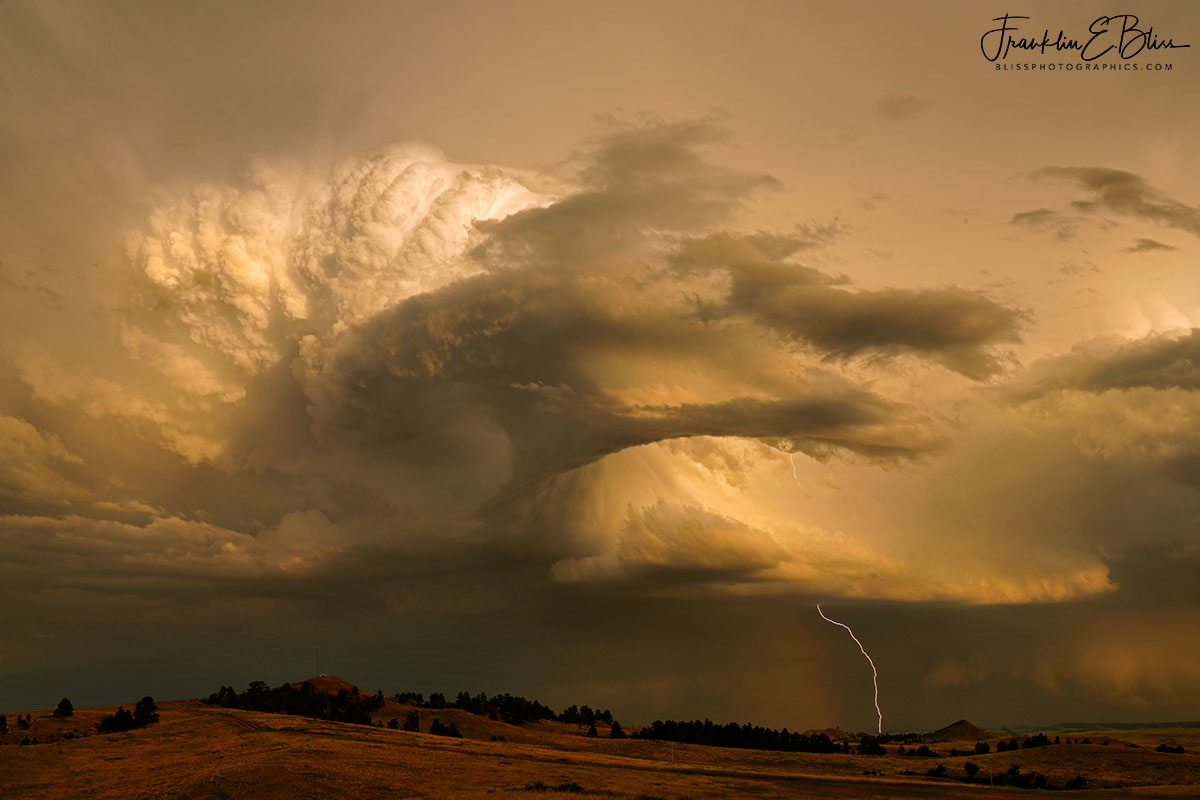 Please take this full screen as it is one of the most complex storm systems I’ve ever photographed. “Holy Crap” came out of my mouth watching this along with a few other interesting mixed metaphors.

Starting with the Lightning bolt, it actually started up higher in the next deck up where it dives through the cloud onward toward the ground. It is following the same rain shaft that is causing the slightly visible rainbow. This was at sunset, more clouds behind me hiding the sun from the ground I stand on but not the high clouds. It was fairly dark being under this monster.

I could clearly see air rushing up that tunnel/horn funnel (above the bolt) up and left into that billowing cloud mass above. A giant vacuum cleaner in effect. This seemed to be as a very large storm though the worst of it went east of us. I had good elevation during this lightning storm which of course is hazardous duty even in a vehicle. Being up on the ridges is why I have such a good view. I am not on the “highests” ridge around if you understand my logic. When I eventually get struck, probably the truck will protect me though vehicle wiring has been known to be damaged by electrical strikes.

As pictured, the weather looks nuts over there in and past Rockypoint Wyoming. The continued north into Montana the night of the 5th of June. HOWEVER, just the apron of this storm covered well over a 100 mile diameter circle so it effected a huge area. The apron of this monster was as big as I’ve seen. I watched this big spinning top of a storm on radar moving here all the way from Casper. It took about 8 hours to make the trip. If it had been 15 minutes later there would have been more sunset colors in this up higher in the clouds.

I have never seen weather like this in my life. Cloud shapes I’m very much into . I am a long term Pareidolia endowed artist/photographer with a Paleontological background. Looks like a Bellerophon snail crawling around to me. To say this was impressive watching this up on the ridge tops there would be an understatement. 📸