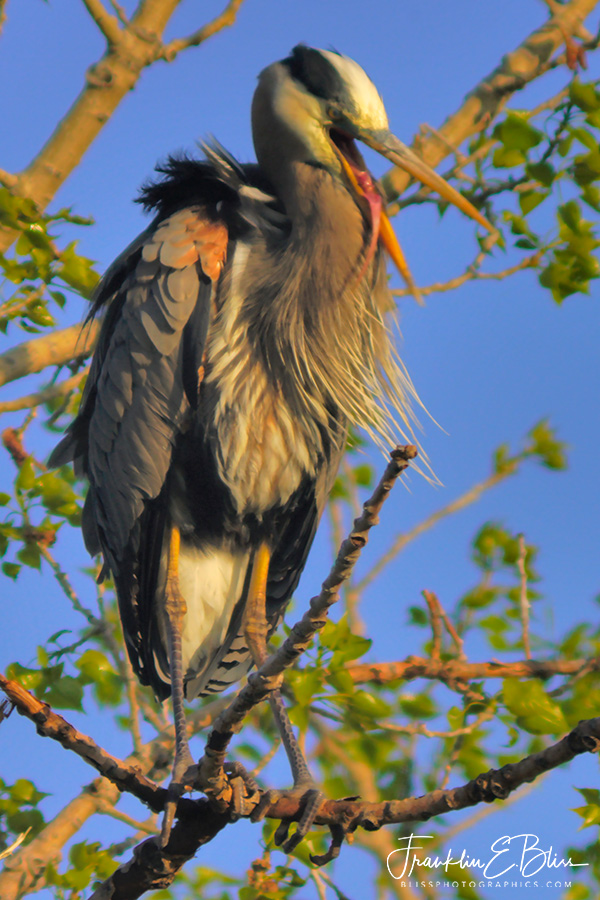 I caught tinder loving parent at a moment where he was “gaking” and within a minute was regurgitating some obviously troubling juices. (of course I have that picture but there is enough green in the photo from the Cottonwood. Birds generally feed their fledgelings that way of course.

Researchers say birds have maybe 20 taste buds over the same area that we have 10,000 so I’m not sure if it bothers him much. There are birds that don’t taste very well…( wait for it)…..but there are others that taste very well..😜🐣🦆🐓

These living dinosaurs (without a tail and teeth) pretty much do dinosaur behavior. Which means they hunt about anything they can catch. My view point as a paleontologist….. Frogs, fish, rodents (mammals) just like smaller dinosaurs hunted. The little mammals certainly were on the dinner plate for the distant relatives back in the Cretaceous here on ranch.

I find small mammal fossils on ranch mixed in with the dinosaur fossils. (rare and mostly isolated very small tooth fossils) Teeth of course are selectively preserved because they are hard and survived the fossilization process better than small softer mammal bones. A disproportionate number made it through fossilization, termed “survival-ship bias” (Phrase for the day)

But that tongue…….. Each bird species have tongues that are specialized to their lifestyle and environment/diet. Because the opportunistic Great Blue Herons also eats a pile of fish…. but its diet also includes frogs and other amphibians, reptiles, insects, and even small mammals if they are in striking distance. While it’s pointy dagger like beak has developed for catching prey, an unusual tongue also helps.

No teeth in that mouth though their avian dinosaurian ancestors certainly had teeth lining that mouth cavity. The hunting behavior was handed down generation after generation though and these guys are exemplar walking metaphors to dinosaurs. Some did survive the extinction at the end of the Cretaceous after all… The avian dinosaurs 🤔

Their Whole anatomy is all about fishing though. They even have specially adapted neck vertebra/muscles that enable them strike like a rattler at prey but they don’t usually catch and release lolol. I note that catch and release is a human invention not seen in nature unless you consider cat’s playing games with their prey……