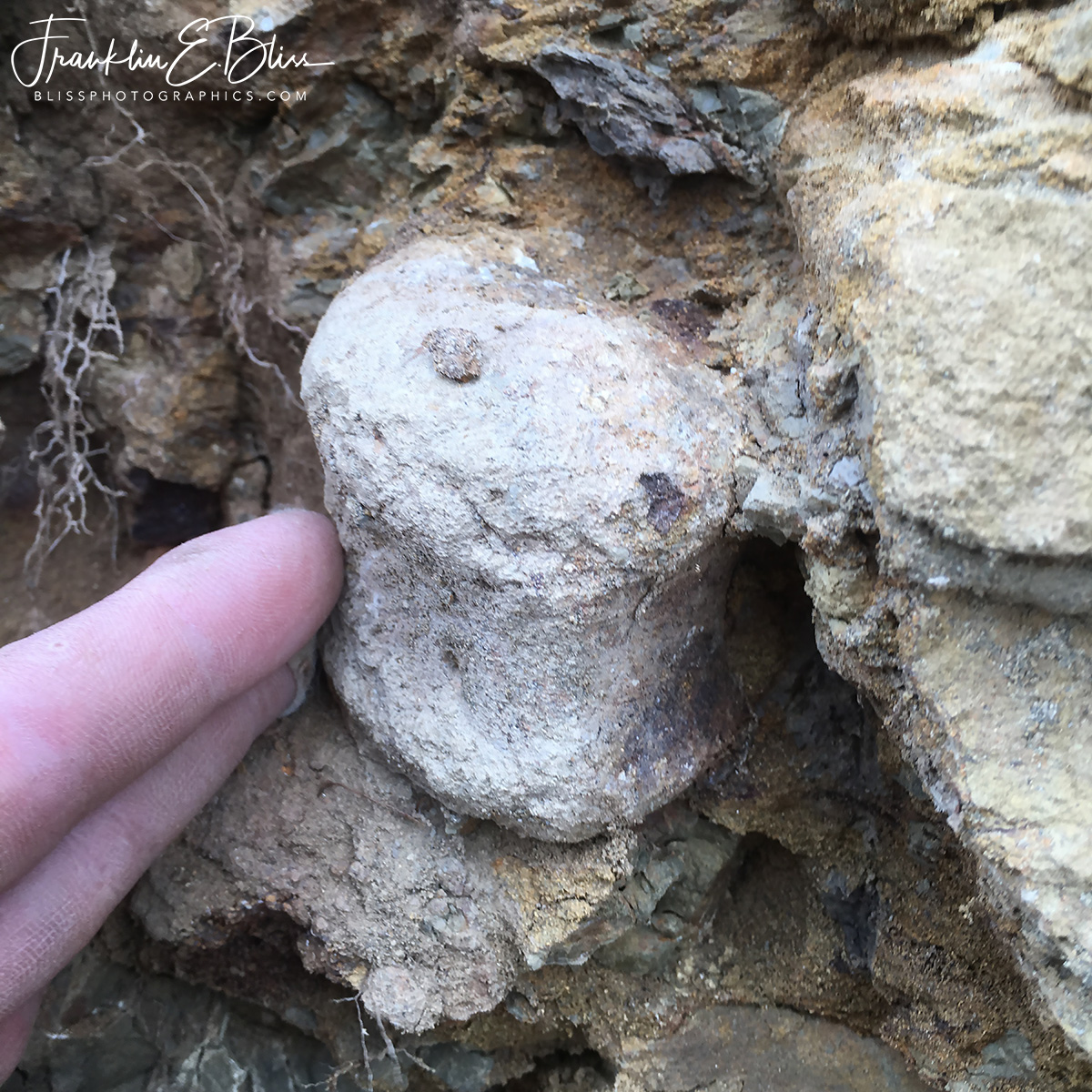 Geologic Musings: This Dinosaur Tail Vertebra “In situ” (in the rock) was taken on an outcrop of Hell Creek Formation we at the Bliss DInosaur Ranch have been working for well over a decade. This small Tail Vertebra from a Dinosaurian got itself a photo. It was experiencing the first light from the sun in some time you might say and had a hankerin’ for a little “limelight”. Here’s some old “wildlife” from the Wyotana borderlands. 🤔

I’m not sure of the name of the previous owner but it sure cleaned up nicely when all that white crust (which is commonly around fossils up here being sort of a chemical reaction area with ground water fluids bearing alternative minerals with them. A reaction rind so to speak. When cleaned with a tooth brush and water, the real bone structure is visible. It’s not crocodile for sure. I know what it’s not….

Hell Creek/Lance Formations are the Cretaceous River Sands/muds the dinosaurs hung out on. Our Ranch is covered with both formations across the MT/WY state line where the Formations change names formally. Same rocks, different name.🤣

I got my masters degree on all things Paleo-Environmental……..I was one one of the first Pale-environmentalist ever minted lolol. There is another that will read this I graduated with. Hi Dave!

So, paleo-topography when this dinosaur roamed was a broad equitorial coastal plain sloping like the piedmont of North Carolina east facing toward the then interior sea way Stretching from the current Gulf of Mexico across the continent to Canada.

Facies: (good google word with geology attached) At the same time in adjacent locations there were the land sandy deposition, the Beach Sand (you know with the little umbrellas mixed in with the sands) and the Marine Sediments were to the east with Cephalopods, Marine Dinosaurs and a host of deeper water fossils.
My ranch and most of the eastern parts of MT/WY/CO gets it’s water from those beach sands (Fox Hill Formation) which is UNDER the Hell Creek/Lance that eventually built OVER the older beach as the growing land filled up the interior sea. That terrestrial riverine environment is at the surface now with younger sediments removed. We do find some sand blasted petrified wood that are residual in the surface sediments that have been removed relics all. The Hell Creek Lance sands all came from now gone large mountain range to the west of the current location of the BigHorn Mountain.. Those missing mountains provided the Sands for the Dinosaurs to walk on.

Huge Rivers the size of the Missouri swept back and forth across the land choked in sand. Many times fossils were moved and buried several times by the meandering occasionally flooding rivers of the Cretaceous Hell Creek Plain. This sediment was laid down at the end of the age of Dinosaurs with T-rex and Triceratops being key players…. .

There is a reason we are Called the Bliss Dinosaur Ranch, Location: Montana/Wyoming borderlands.