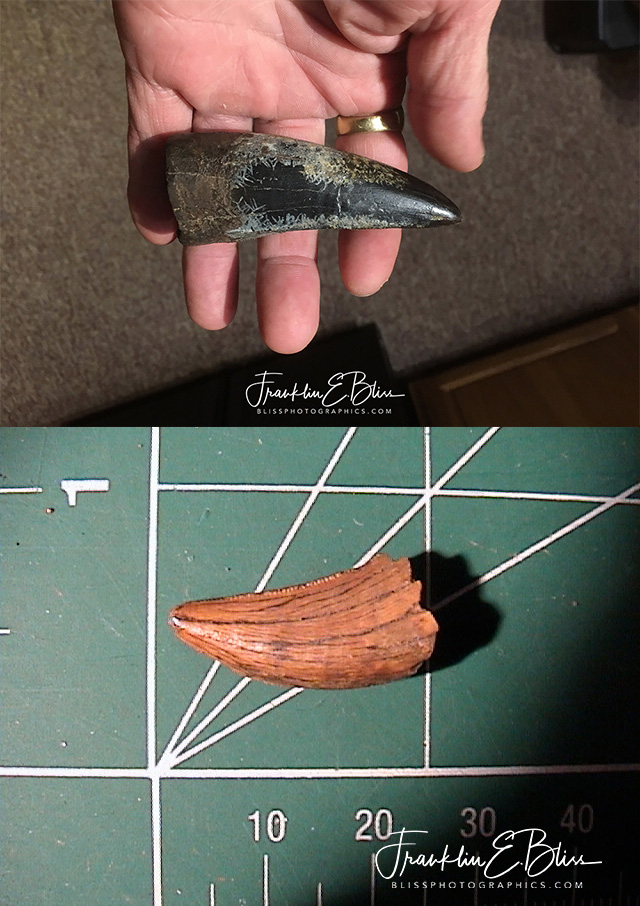 Cretaceous Raptor Dinosaur Teeth: In my “backyard”… Real Big Wildlife, not the little critters we have running around now lolol.

Genuine medium sized T-rex teeth don’t grow on trees. . You don’t find or see these every day up here. We find maybe one every year on average. It’s hard to find them this nice. They are fragile at best plus they aren’t that common. Smaller teeth are more common as there were more smaller animals running around the environment.

The extra image below is a Cretaceous version of “Velociraptor”. It was a Cretaceous relative that paleontologists named Dromaeosaur. Note the serrations and obvious brown enameloid surface. This oak colored preservation is unique to one of my 25 microsites. All other teeth are black here. Again, looks remarkably like a dinosaur tooth. (The squares are an inch on a side). Serrations actively held on to meat bitten into, ripping it away.

These fossils were well preserved even after the owner broke them off. There is still a little bit of the root still attached (the browner part on the left ). The little white lines on the big tooth are chemical etching. This is related to either stomach acid and/or etchings from plant rootlets on the surface of the enamel. The enamel is essentially unchanged since the owner lost it over 66 million years ago.

These are both Hell Creek/Lance formation fossils. I have several of these bigger T-rex teeth . There are many hundreds of smaller other teeth in the ranch collection. These were found over 2 decades of hard work. Interestingly, they ALL to a one look like and actual tooth. Many people mistake rocks with random shapes for teeth. Not many are or were.

I see many NON fossils (fake fossils) on the internet that look like teeth all the time. They are always random shapes of rocks that look like say a tooth… The human mind easily sees shapes in random data. Problem is, they have NO actual substance of a tooth. Most pseudofossils will have NO enamel. No tooth structures internally, no serrations on the edges, nothing that says tooth to a paleontologist. With no microstructure and 3D biology, there is no fossil there.

Pseudofossils may be very interesting and worth picking up. Cool stuff, they just aren’t fossils. These rocks have no biological history in their past thusly are not fossils. .

My background: (I have a masters degree in a Paleontological Field and have been running the Bliss DInosaur Ranch for 20 years. Digging DInosaurs in my spare time.