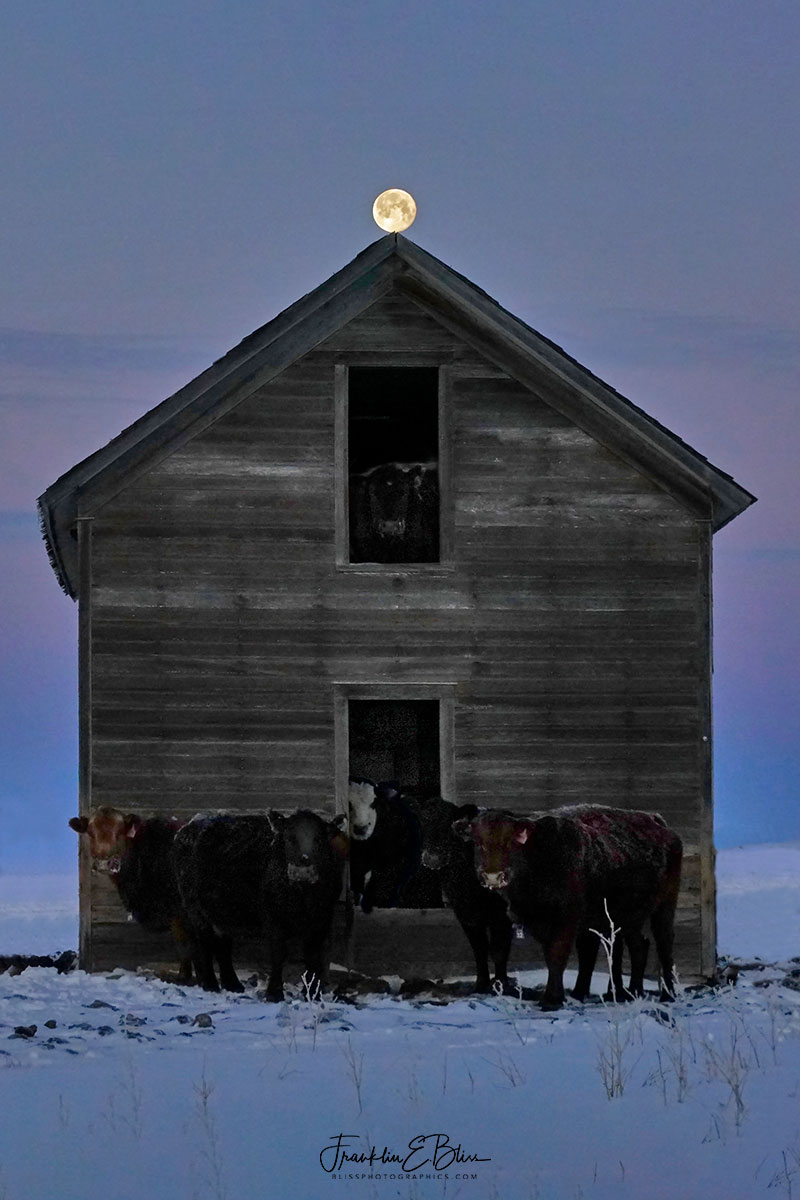 IT was a frigid morning at 14 below out on the backroads of Wyotana. I’m driving around in twilight before the sun comes up 20 or 30 miles from my homestead with a box o cameras next to me. I ran across this local landmark where I had to stop and stare.

OK, In full disclaimer mode, this is ART, I “assisted” the cow upstairs within the confines of the digital darkroom . That arena has no such rules of reality to control what I do. All work and no play makes Frank a very dull boy 😜😜😀📸📸 The moon was actually there I point out. ONLY the upstairs window has been messes with. I swear lolol Did I mention that this is actually ART? LOLOL.

There were about a half dozen cattle on the first floor. I’m pretty sure this building is a bit past the “basic fixer upper” moniker. The wood floor inside certainly has become soaked / covered by a rich bacterial mix. Any port in a storm I suppose. It would definitely be warmer inside than outside. It is also about the only wind block anywhere within easy walking distance in this snow. Cattle have a tough time in the winter during the really cold periods like the one we just had. Even the cattle outside are on the sheltered side of the house mostly out of the wind. 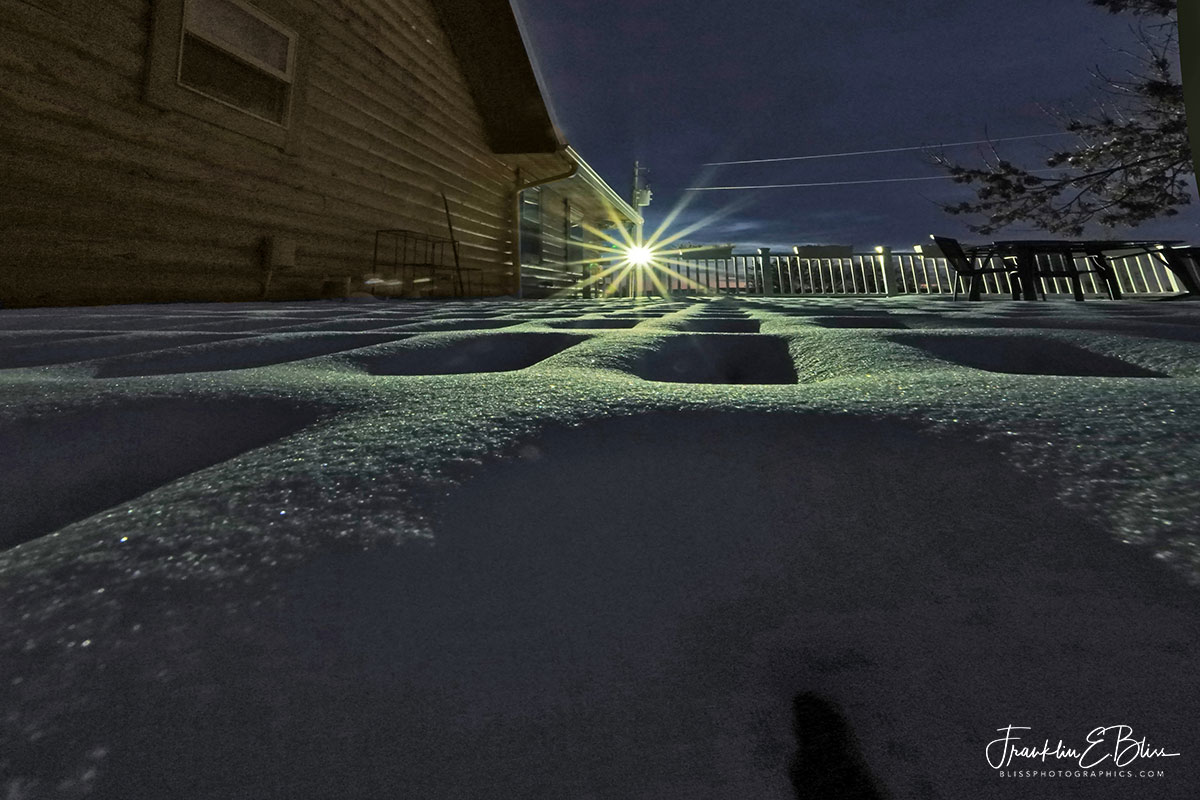 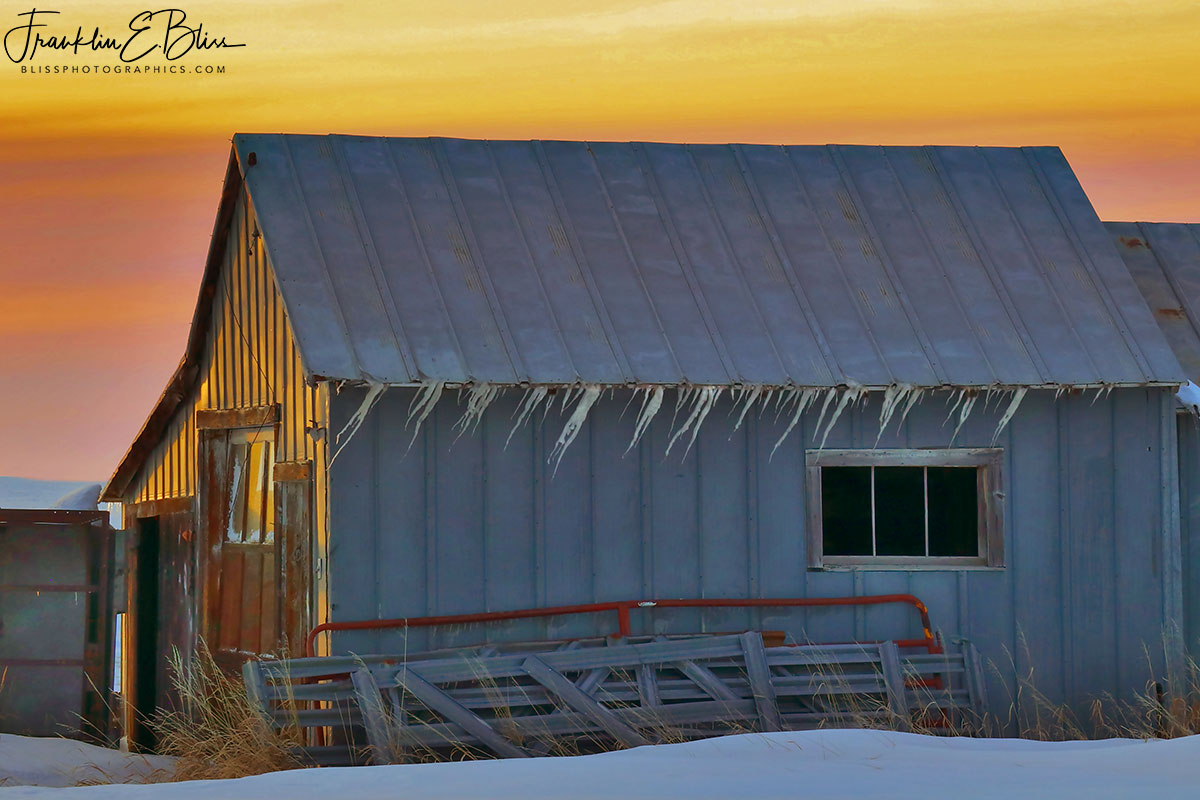 Good New Years Morning to all. Welcome 2020. It’s going to be an interesting year.

On this wonderful morning I noticed the breeze here had left some physical evidence of it’s direction and magnitude. The sunrise off frame was hard to ignore but I got distracted. The rustic nature of this metal building was hard to ignore in this light. The winds the day before while the sun was warming the ice on the roof. Icicles grow when the air is cold but the roof is warm either from within or from without. I can see clearly that the wind was not only steady but quite cold. The sun at 4000 feet is still amazingly strong even in mid-winter. Day time melting or even “Sublimation” (your google word of the day) occurs. These sun induced phase changes from snow in an of themselves will ablate the snow cover significantly during just a short time.

The old building tells many stories. Several generations of additions/ are apparent. The weather has taken it’s toll on the windows. It’s a good thing on a ranch to have a few extra gates sitting around. Many things have been stored within this shelter on the prairie. This abandoned building stands alone against the elements certainly here in the borderlands of Wyoming/Montana. 4000 foot in elevation, NO trees around it, nothing to block the winds across the plains. Who knows what this building has seen. No one is telling. 🤔 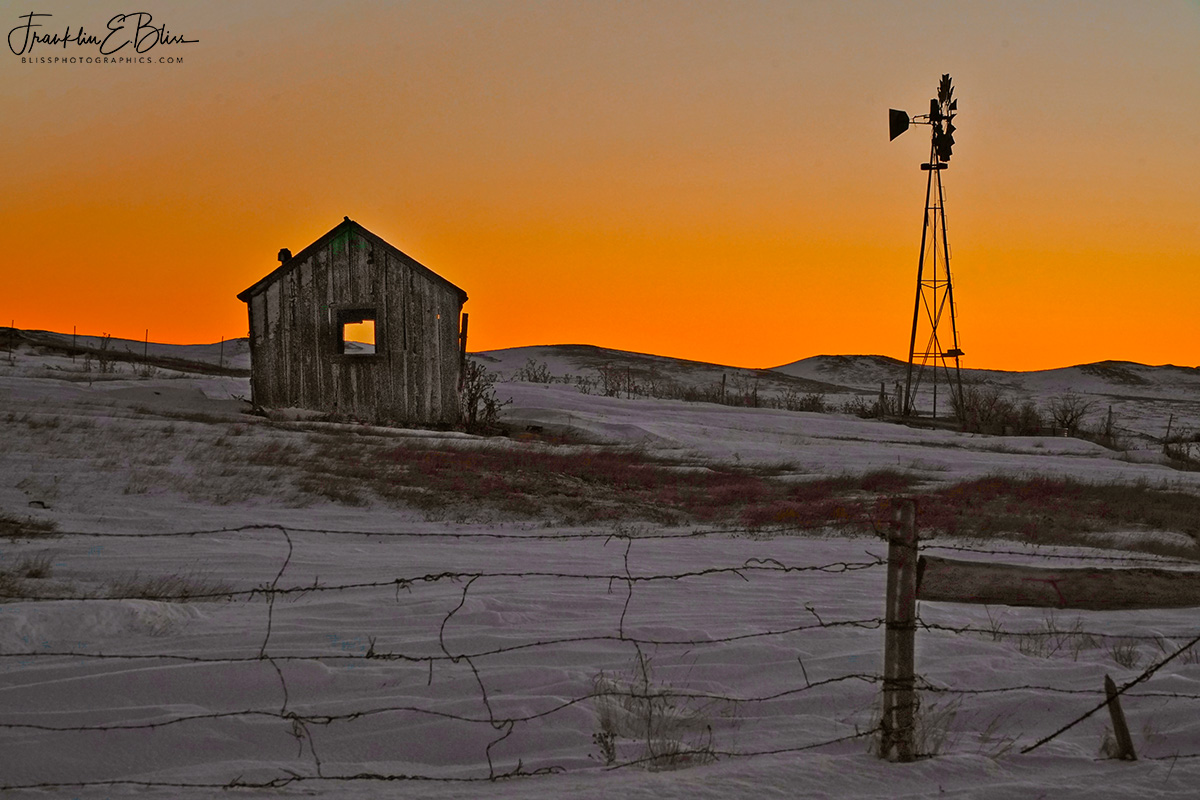 For me to get to this location, I have to leave about an hour before sunrise “Windmill Shack Orange Alpenglow”. It is well down into Crook Country Wyoming about 40 miles towards Devil’s Tower. If that hill weren’t in the way, you could see the big thing.

Normally I would just drive up there. This isn’t my ground and I’m not big on trespassing on others ground. This shot was from the country road It is now filed in my “Wyoming/Montana backroads folder. All of the backcountry roads up here are gravel with an occasional Concrete/asphalt highway cutting across no mans land. It’s about 40 miles in any direction from this spot to a Wyoming State paved road. It’s all county road department maintained here.

There are some rough areas of course to get here. But if it’s frozen, the mud is no longer a problem but for deeper than your tires ruts lolol. Driving a Jeep Grand Cherokee where taller pickups leave tire grooves is always exciting. I’m still waiting for my now officially issued VIN number model year 2020 Ford F150 to be built. It should change the height at which I take images sometimes lol.

I get lost in reconstructing past lives and events, the comings and goings of old homesteads. This wasn’t much more than a cowboy bunk house with a wood stove for the “hands”. You had water with the windmill and I suspect an outhouse long since gone somewhere nearby downward of the prevailing wind. This land has had cattle or sheep on it for 100 years and slightly more. That’s 5 generations of cowboys that stayed the night or the summer in this treeless pasture.

This is very big country open back country with many square miles of grass attached to any particular ranch. This is a steel windmill which is more expensive than building the wood towers was. This water pump is still standing though. It looks to be in working conditions. 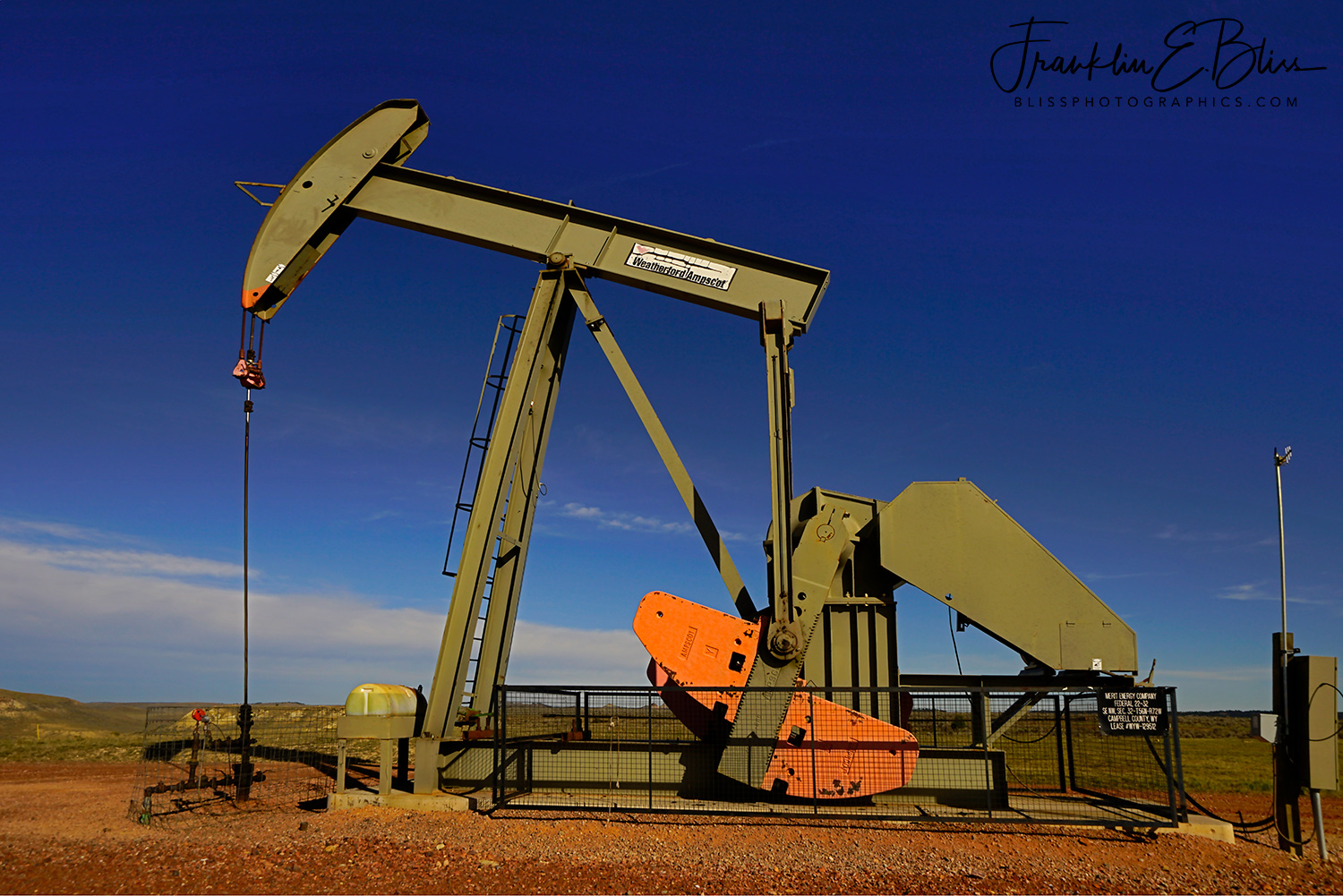 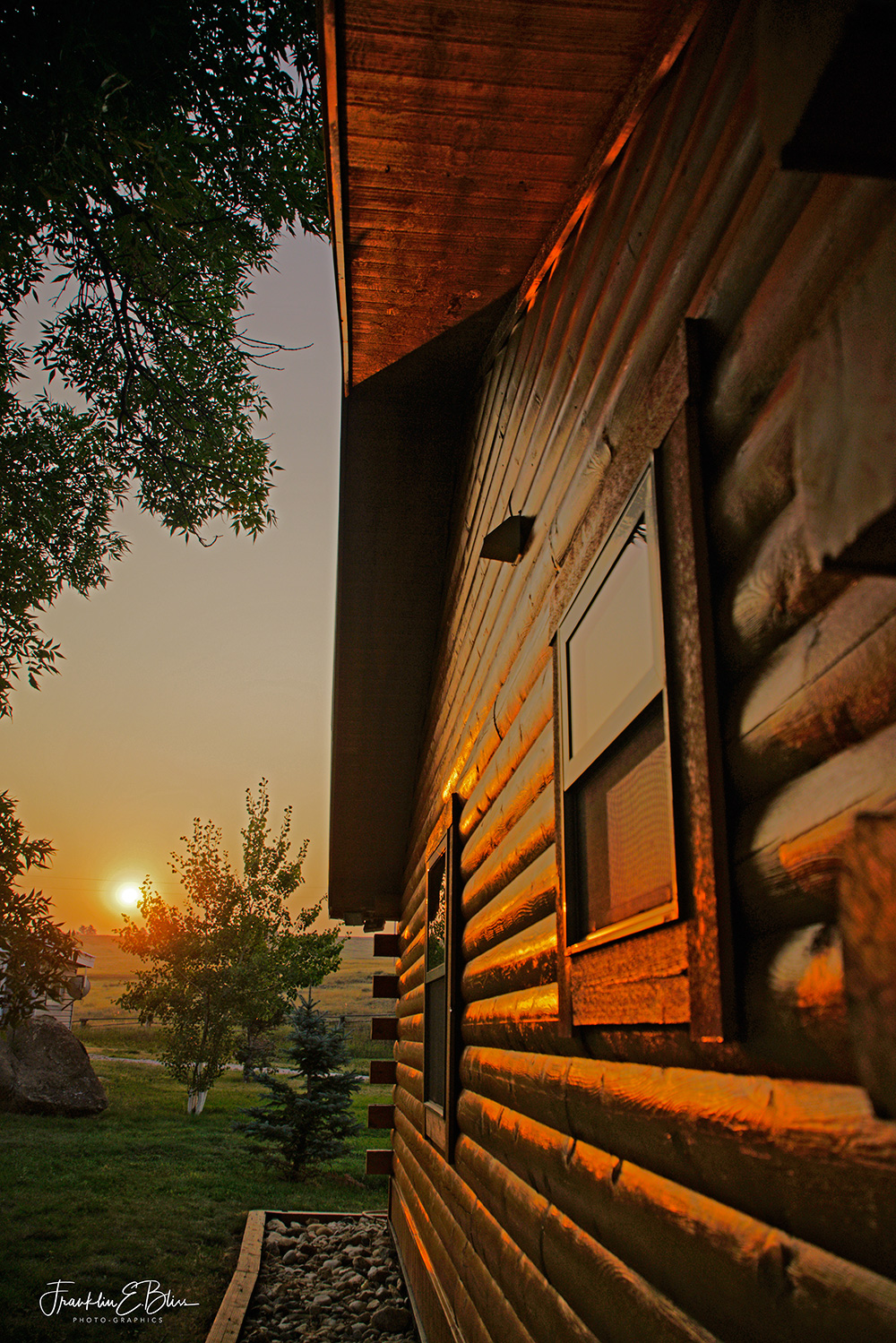 This summer we had JUST finished sealing the Ranch’s Log Lodge building. That’s an every 4 or 5 year job up here. (Log houses are NOT for sissies.)… The sunrise that morning was filtered by a good mist up the ridge giving me a reason to go outside and grab some of these extra photons.

Work is where and when you find it in this profession lolol.