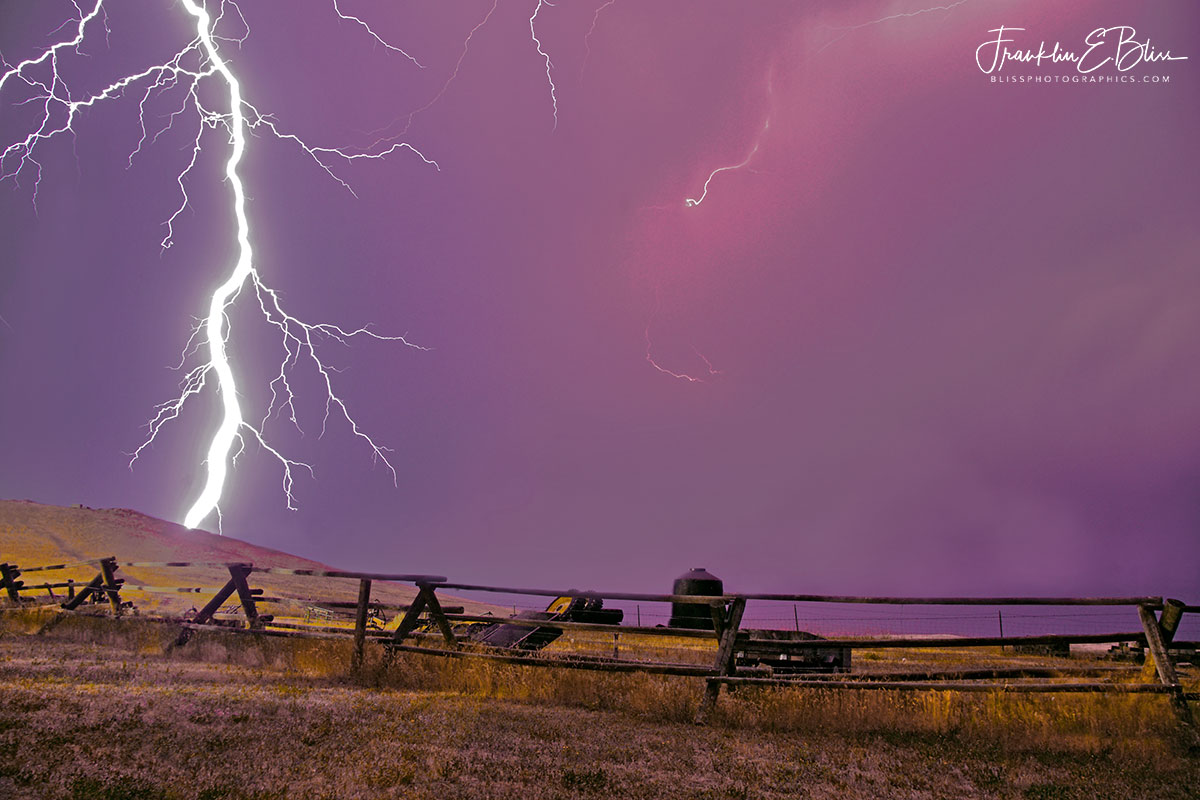 I used to do stupid things like go up in the back yard to watch a rain/thunder storm come in at midnight. This was indeed less intelligent than my IQ would indicate my choices might be. Apparently somewhat risk adverse at the time, I was actually driving my Polaris Ranger Crew UTV which while it has a metal roll cage, had a plastic roof. This bolt woke me right up and could have put me right to sleep lol.

Doing a LOT of lightning shots every summer, I ordered “Clever Girl” (my Ford F-150 Raptor) from the factory WITHOUT a sunroof for a reason. IT’s always good to have metal between you and the storm.

Isolated from ground currents probably in the vehicle on rubber…Better than being on foot…. Having said that… I would not like to be under or even closer to that bolt. It felt like an artillery shell being launched. That along with the benefit of being blinded at the same time. Flash bang less than 1 second…

The old “Steel Yard” on the ranch is actually Over that hill. It consists about 1/4 acre of various antique farm implement parts and pieces with a lot of metallic objects. It is roughly 1/4 mile past that ridge line. I suspect the bolt hit a sharp edge there as moist drainage is also over there. I suspect that is where the ground currents went as I noted the sudden lack of Jack Rabbits down there after that too.

That was a very hard core strike from the incoming storm. It was time to go inside which I did post hast having learned my lesson. I’m much more careful now days but working on your porch is about the same thing as the Polaris with the fiberglass window into the metal roof overhead. Inside a vehicle or inside a house with a proper grounding ring around it. Never touch metal in your vehicles during a storm….

This is a 25 second time exposure in pitch black around midnight. Long time exposures at night have unintended consequences. Red and blue colors make pink with both colors being enhanced. The silly long exposure at least with my Sony Alphas give me these hues. I can’t see the real scene of a long exposure on the screen of the Sony to argue with it. This is just a close estimate by the camera of the scene. I just saw a flash… What colors are put out by lightning? All colors…..there was some ambient light from our ranch pole lights too messing the colors up….

Why time exposure? You get multiple bolts with a 25 second or so exposure, ISO 125, f4 to start with… Work from there moving your f stop up a click each shot to adjust to the ambient light conditions as necessary. Review the images for results and pick your poison for the duration of the storm.